The mysterious concrete bunker at Remic Rapids has perplexed many a passerby.

A familiar sight to many Ottawa residents enjoying the river-front path along the Ottawa River, the concrete bunker at Remic Rapids has been a mystery to many, myself included. Having lived nearby for over 20 years, I have always been curious as to what purpose this odd concrete structure had situated on the picturesque shoreline of the Ottawa River.

Aerial view of the concrete structure at Remic Rapids.

Once and for all I thought I’d get to the bottom of what this architectural oddity was, and find out what purpose it had, or still has. What was revealed was a fascinating hidden history that includes the fact that Ottawa once  had a NUCLEAR REACTOR.

The year was 1970 and the Atomic Energy Canada Limited, or AECL, was placing a SLOWPOKE-2 class nuclear reactor at Tunney’s Pasture. According to The Canadian Society For Mechanical Engineers documents, this nuclear reactor was installed in Tunney’s Pasture at 20 Goldenrod Avenue. It was constructed as a commercial testing reactor to determine its feasibility. This nuclear reactor was in full operation after it reached critical mass in 1971 until 1984 when it was then moved to another test site located in Kanata, later decommissioned in 1992.

Sketch from The Canadian Society For Mechanical Engineers document of what the Tunney’s Pasture nuclear reactor looked like.

The reactor, nicknamed SLOWPOKE, (an acronym for Safe LOW-POwer Kritical Experiment) which used 93% enriched uranium. The reactor core sits in a pool of regular light-water, 2.5 m diameter by 18 feet deep, which provided cooling. The reactor built at Tunney’s Pasture achieved “Critical Mass” or the point at which a nuclear reaction is self-sustaining on May 1 1971 and continued operating until 1984. 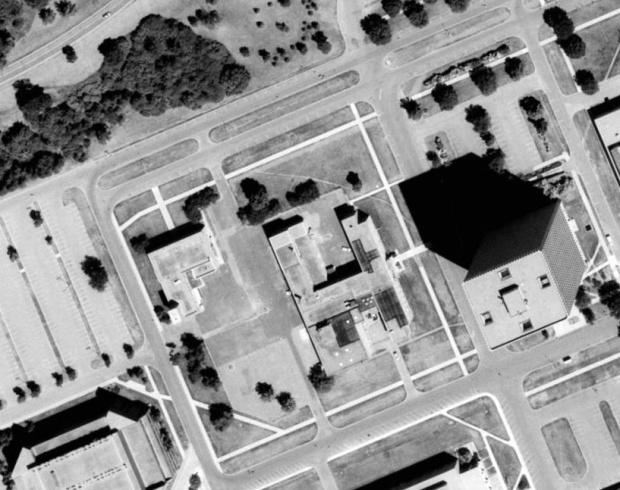 The concrete bunker that remains on the shore of the Ottawa River directly opposite the old nuclear reactor site was built at the same time as the reactor in 1969-70. It was built to facilitate the increased “cooling” needs of Tunney’s Pasture, one of them you could speculate being the addition of a small nuclear reactor.

Aerial image showing the proximity of the Remic Bunker to the Tunney’s Pasture Nuclear Reactor site.

A 1969 November 11 Ottawa Journal article describes in detail the construction of the bunker and a trench used to contain a pipeline to provide this cooling water to Tunney’s Pasture. A 3,000 foot long pipeline was placed in an underground trench that ran from the Ottawa River bunker building to Tunney’s Pasture to provide, as the article states: “river water which will be used for condensing in the air conditioning system.”

The concrete bunker built in 1970, just before the nuclear reactor began operation, housed a pumping station that provided a 35,000 gallons per minute water intake from the Ottawa River through a 42 inch diameter pipe underneath the Parkway over to Tunney’s Pasture. A current satellite image of the area clearly shows the trench line from the bunker to Tunney’s Pasture.

The pipeline would then return used water back to the Ottawa River at a temperature 8 degrees warmer. The pumping station concrete structure and the pipeline was built at a cost of $2.5million and was constructed in co-operation with the NCC who owned the land the project was built on. The NCC at the time re-assured Ottawa motorists the construction of the bunker and pipeline would not disrupt traffic as it crossed the Parkway saying “We Insisted that they install four lane detours,”

Four years after they were completed in 1976, the Remic Bunker and Nuclear Reactor site. 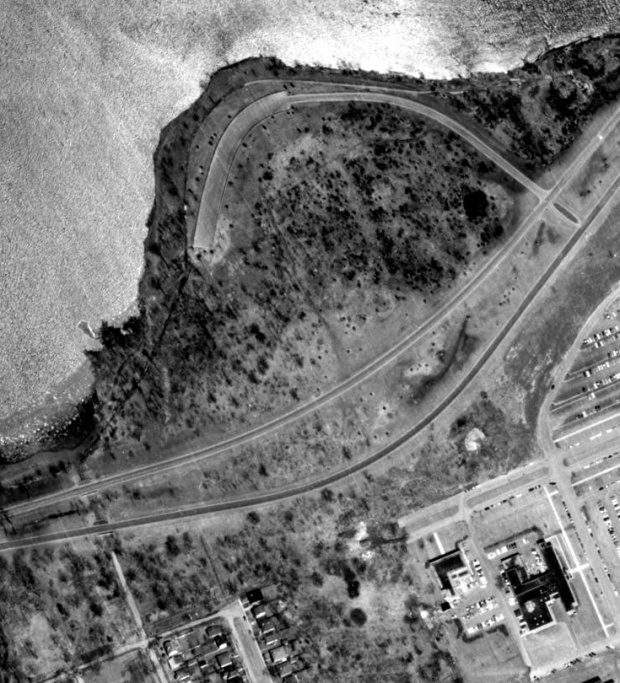 A 1965 aerial image showing the Atomic Energy Canada Buildings at Tunney’s Pasture and the area of land where the bunker and cooling water pipeline have yet to be built.

The pumping station bunker and pipeline were finished in 1970 and the reactor began operating a year later. Whether or not the bunker pipeline bringing cooling water to Tunney’s Pasture was directly related to the addition of a nuclear reactor remains speculation but it is interesting to note the proximity and similar timeline of both projects.

One of the access hatches in the field along the 1970 pipeline from the bunker to Tunney’s Pasture.

One of four hatches on the roof of the bunker.

This ground level vent spews a lot of hot air.

One of the many odd hatches on the bunker.

Built in 1970, the bunker has been updated with modern security features.

The SLOWPOKE reactor was shut down in 1984 and the building it was housed in has since been demolished and is now a parking lot. However, the bunker at Remic Rapids is still there, and you crawl on top of its roof and listen to the hum of machinery working away below almost 45 years later, still bringing cooling waters from the Ottawa River through a 3,000 foot pipeline over to cool the hot air being generated at Tunney’s Pasture.

The sun sets on one of Ottawa’s unknowns…