BENT TREES MARKERS OF THE PAST

A hike through an undisturbed forest is something of a treat, one can clamber over rocks and fauna that has never been traversed by others, providing an escape from the crowds and busy roads of the city. These days it is not easy to get lost in the woods with cell phone apps and GPS to guide our way…but something I recently stumbled upon revealed someone long ago had also trekked the same woods, using not a GPS to guide them, but a strangely bent tree…

THE MYSTERY OF THE CROOKED TREE

Before a network of highways and roads guided us across this country and even before the arrival of Europeans in North America, a network of trails and paths used by native people took them from place to place. What existed was a roadmap of trails, a series of marked paths to guide travelers on a safe route across the wilderness.

The first record of trail marker trees appeared in a document called “Map of Ouilmette Reservation with its Indian Reminders dated 1828–1844”. This map shows actual drawings and locations of existing trail marker trees.

These ancient trail routes were later used by European settlers to build rudimentary carriage roads that would later become the paved asphalt roads we use today. Back then, there were no signposts, rest stops or tourist info centres to point us in the right direction. Instead these native trail blazers built “trail marker trees”, unique bent trees that pointed the passer by in the right direction. These bent tree markers resemble strange oddities of nature if you can find one, markers of the old trail travellers. Once sapling trees bent with rawhide or vines, they now give us mysteriously shaped trees in the forest. 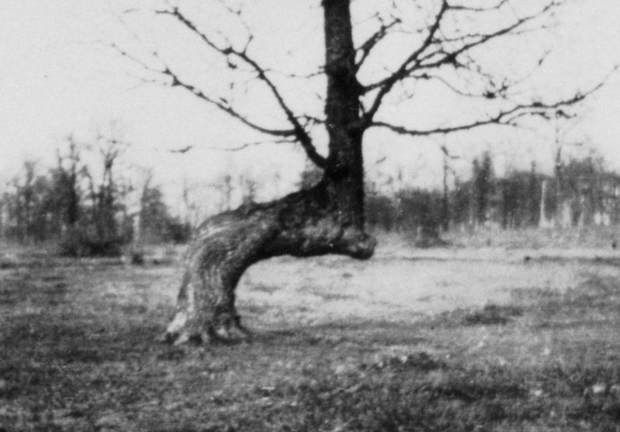 A while ago a friend told me about the bent tree trail markers, but I was skeptical of their existence since nature can behave strangely, giving us oddities that seemingly defy any natural explanation. I thought bent trees were just another one of these natural anomalies until I came across one last week. There, high up on a high rocky ridge was the definite shape of a bent tree, its presence caught my eye much like it would have to a forest traveler many years ago. Upon closer inspection, it became clear that this might not be natural, and could very well be one of the old bent tree trail markers from long ago.

Discovering the strange bent tree on a rocky high ground near Opinicon Lake. (tree on left)

In the 2011 Field Botanists Of Ontario Newsletter, an article written by Paul O’Hara explains in great detail the strange but fascinating “bent tree” markers made by indigenous people in the Toronto area hundreds of years ago. You can read that piece here Also of interest was an informative piece written by William McClain of the University of Illinois piece written by William McClain of the University of Illinois who explains how and why these odd bent trees were formed. Trail-marker trees were important to the indigenous tribes who used used them while traveling, using their own methods to make them. Generally, oak saplings were bent and tied to stakes or rocks using animal skin or wild vines. The direction the tree was bent would indicate the proper course to the traveler. These bent marker trees were usually placed on high ground for visibility and would usually point towards a waterway, a settlement or a lake, the route best taken to find these places.

In 1965 archaeologist, Robert E. Ritzenthaler, wrote an article about the bent tree trail markers that appeared in the Wisconsin Archeologist, Volume 46, Number 3, 1965, claiming any trees 200 years of age or younger would have to have been made by pioneers with early Europeans quick to copy this practice of Native Americans. The practice was widespread throughout North America, and Raymond E. Janssen, in the February 1940 issue of Natural History magazine, mentions their distribution into the Great Lakes region.

Dennis Downes, President and Founder of the Great Lakes Trail Marker Tree Society explains “Some of these trees would have brought them to fresh water springs, the preferred source of water used by the Native Americans and settlers alike. Other Trail Marker Trees would have guided them to areas with exposed stone and copper deposits needed for their adornments, hunting implements, and everyday tools. Yet, others would lead them to the areas where they could gather medicinal plants as well as plants used to make their dyes and paints. The Trail Marker Trees would have taken them to ceremonial sites and occasionally the burial sites of their ancestors. Also, in relation to the rivers, these trees would indicate areas of portage and safe crossing.” Downes continues to research and document the bent trees of the Great Lakes, and his impressive amount of work on these trees can be viewed here.

Indian Country Today Media Network, which covers Native American and First Nations of Canada culture, sat down in 2013 with Don Wells, author of “Mystery Of The Trees” and discussed the history of these strange trees. Wells explains that back in the 1600s and 1700s, when natives were traveling from the Atlantic to the Pacific, and from Canada to Mexico, there were trails all over North America. “They didn’t have GPS or a map, so to find their way from A to B and back home again, they had marker trees, or trail trees, or a signal tree or a yoke tree”. explained Wells, who also produced a documentary about these fascinating historic trees. “These trees would be bent as saplings, when they were about ¾-inch in size, and tied down. They would be left that way for a year and lock into that position. They used them to mark trails, crossing points on streams, springs to find water and medicinal sites where they would get plants.

Read more of their info on bent trees here.

HOW BENT TREES WERE MADE

How a bent tree trail marker would have been made. (Sketch by author)

A sapling of either oak, maple, elm or other hardwood that could bend easily would have been staked down, pointing in the direction of interest. As the sapling grew, its side branch would grow upwards, and later form the main trunk of the tree. (see sketch)

The bend of the tree would be a few feet off the ground so the horizontal trunk could still be seen in the deep snow of winter. Sometimes there would be a hollow made in the bend to leave message sticks or other parcels.

On a recent trip to Opinicon Lake we traveled down an old road that was previously used to transport rocks quarried from nearby Elgin used in the construction of the Rideau Canal locks. This winding, narrow road led from the main road of Highway 15 to the Rideau system at Davis Lock. I noticed high up on a rock cliff an unusual tree that matched the description of the “marker trees” my friend had once told me about. I grabbed some gear and hiked through the forest to inspect the tree in closer detail and sure enough it was a strange bent tree, pointing in the direction of Opinicon Lake and the connection between two lakes. Upon further inspection it was revealed that another bent tree was also on another area of high ground. It seemed to be consistent with the old bent tree practice: on high ground, bent towards a place of interest, along a very old old road that was most likely once a trail.

In McClain’s article it is also mentioned that the settling pioneers also adopted the bending of trees method to mark a path, so it is likely that perhaps the one I found was made by one of the early settlers to the area before, or during construction of the Rideau Canal system. Perhaps the trail was marked by natives as away to the waterfalls of Opinicon Lake (Which is a native word for “potato”).

Map by Col.John By from 1830 showing the route of his proposed Rideau Canal system. The bent tree was found near Davis Lock. Note lack of roads and former name of Opinicon Lake was “Mosquito Lake”.

The Rideau system was once an important route used by the First Nations people to travel between Kingston and Ottawa, so finding a trail marker tree along it is not unusual. The tree also contained a hollowed out area in the bend, as mentioned before for leaving message sticks. It was fascinating to see one up close and in person, its location a once prominent point of land for a traveler long ago. I will not dismiss the possibility that it is or natural origin but the evidence and research seems to prove otherwise.

ARE THERE MORE OUT THERE?

Many of these unique bent tress have been lost to road construction, development, logging, or just uncertainty as to what they were. When an original trail was later made into a road, many were most likely lost, yet they may remain as the last living piece of history connecting us with our first nations people and their unique way of life. 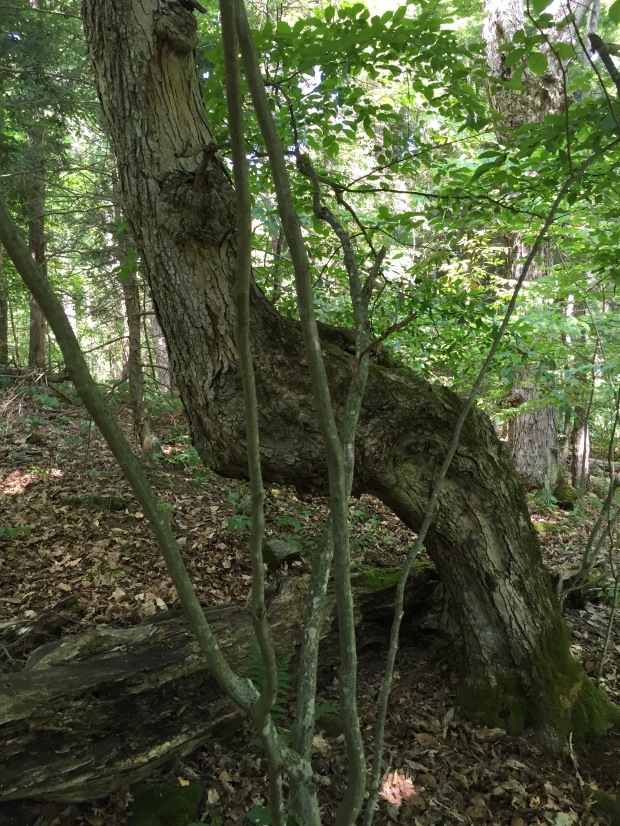 As with any historical mystery, some will continue to debate their origins and deem them as natural phenomena, but with so much evidence proving otherwise, it seems unlikely these mysterious trees are the product of natural mutation. These unique markers to our past have been with us for centuries yet they remain largely forgotten in the unexplored wilderness of our region. Who knows how many more are out there waiting to be found, lost markers to the past, silently awaiting their next visitor.