The legend of the Avro Arrow endures after almost 60 years since it’s untimely demise in 1959. Images of the iconic Canadian designed and built advanced fighter jet being cut to pieces on the tarmac after cancellation of the Arrow program still leaves a bitter impression on many Canadians.

Not much survived that government ordered destruction of our beloved Arrow, a few pieces were whisked away by Avro employees before they were fired from the company, and the blow-torch scarred nose section and wings rest in the Aviation Museum in Ottawa.  These scraps are all that’s left to remind us of this unique part of Canadian history…until now…something new has arisen from the Avro ashes: Unpublished film negatives of a 1958 Avro Arrow test flight found for sale on Kijiji.

These are extremely rare, and the seller claims they are unpublished negatives from the June 11 1958 test run of the first Arrow prototype, “RL-201”.  The shots were taken by the seller’s father, who was a freelance photographer in 1958 and snapped these pics of the Arrow in Malton, On. The unpublished photos show the prototype Avro Arrow during a test flight, then sitting off a runway with its landing gear collapsed. Research shows that this particular incident occurred on June 11th 1958 when a malfunction resulted in main landing gear failure with the prototype Arrow skidding off the runway.

The Kijiji ad originates from Burlington, On, and after contacting the seller I was informed they are owned by the son of the original photographer, an inheritance after his father passed away. A direct link to the ad is HERE . Owning this rare piece of history comes with  $50,000 price tag for the 14 original film negatives. The ad photos show 6 of the 14 original negatives.  I used Photoshop to invert and flip them, providing us with the “positive” image as the Arrow test would have appeared on June 11th 1958 when this flight was captured on film.

The photos also capture the two Polish-Canadian test pilots who flew the Arrow, Janus Żurakowski and Wladyslaw “Spud” Potocki chatting in an office, positively identified in the photos negatives once I had inverted them. Zurakowski is from Barry’s Bay north-west of Ottawa where there is a town memorial commemorating his historic test flight in the Avro Arrow.

These remarkable photos speak for themselves but I have done my best to provide some explanatory captions below each negative and inversion image. I have contacted Canada Aviation and Space Museum who are now aware of the existence of these negatives..

Below are the original negatives and underneath each my reversal (positive) image and caption.

Enjoy this flight back in time. 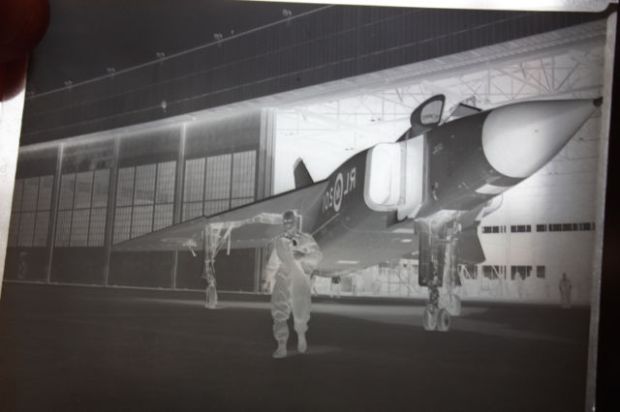 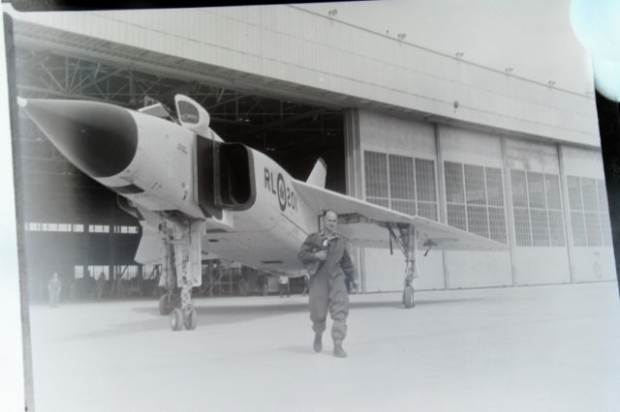 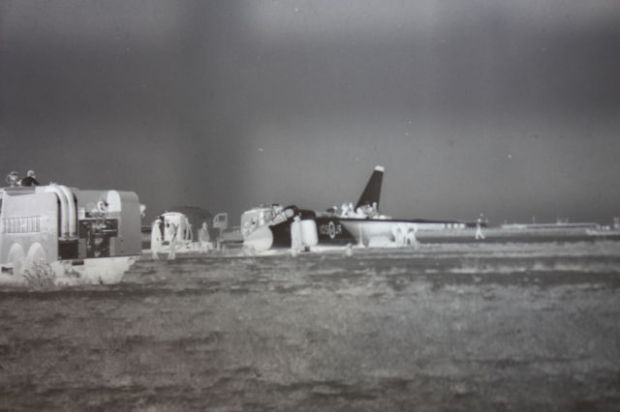 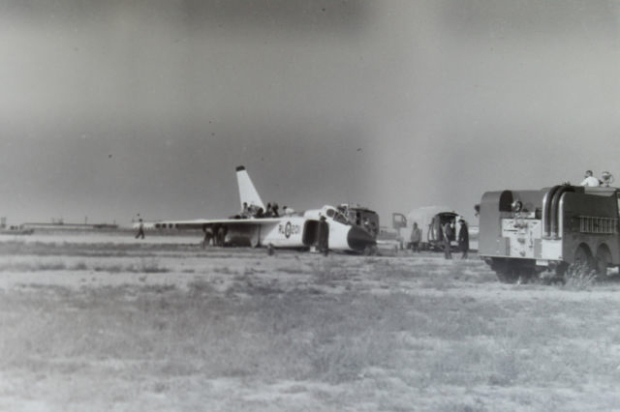 NEGATIVE 2 INVERSION: RL201 skidded off the runway after the landing gear collapsed. 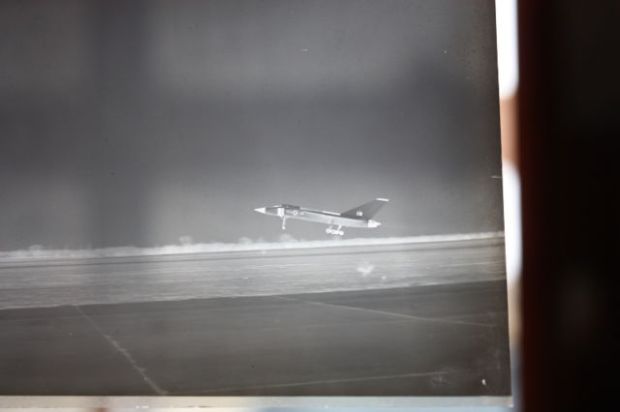 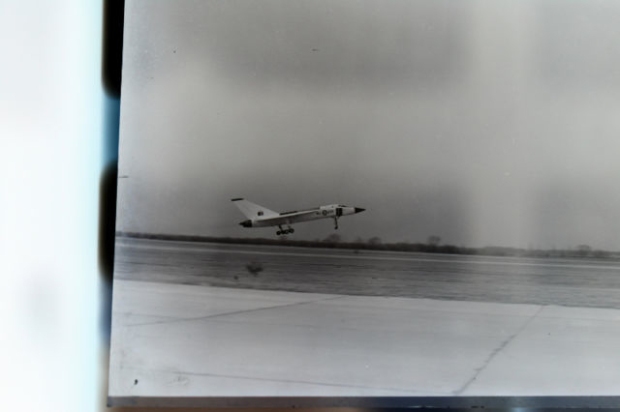 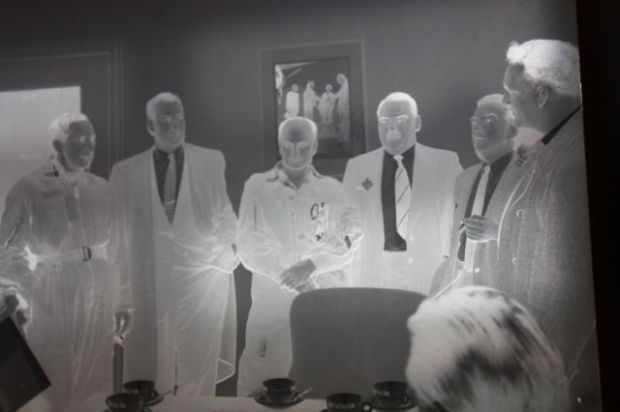 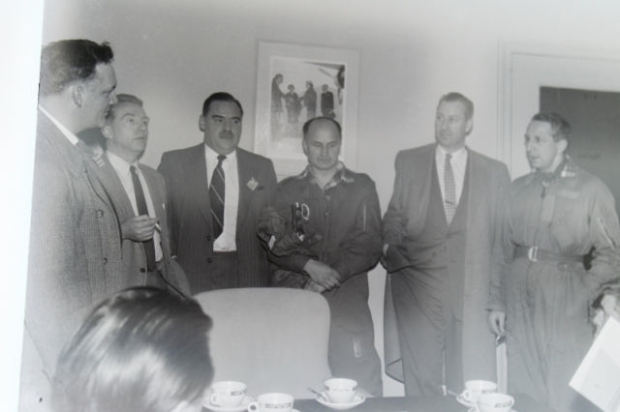 NEGATIVE 4 INVERSION: Looks to be a scene from the Avro offices, with both Arrow test pilots, Zurakowski and Potocki. John Plant, President and GM of Avro is 3rd from left. Fred Smye, Avro Exec, Vice President is 2nd from right. 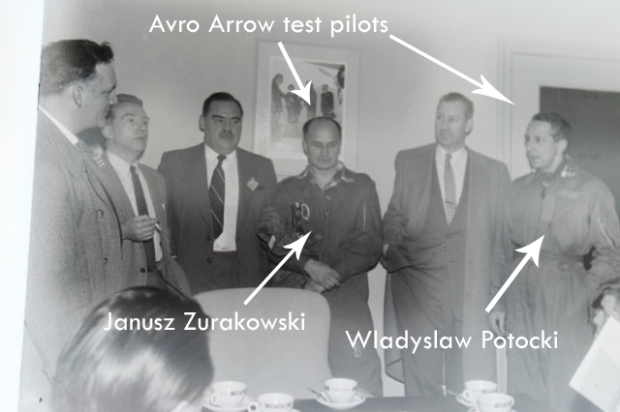 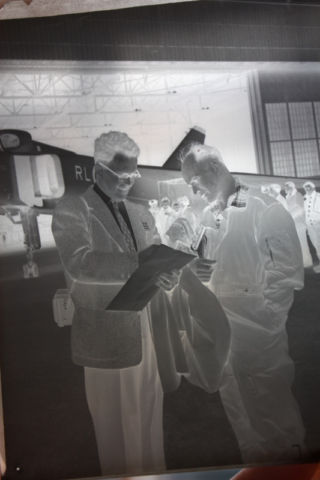 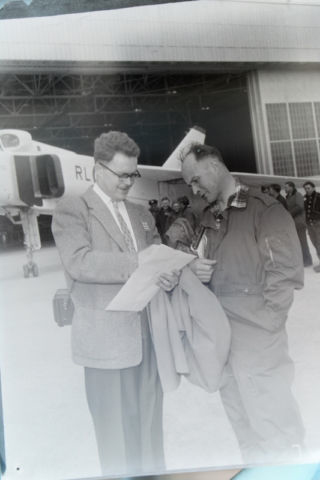 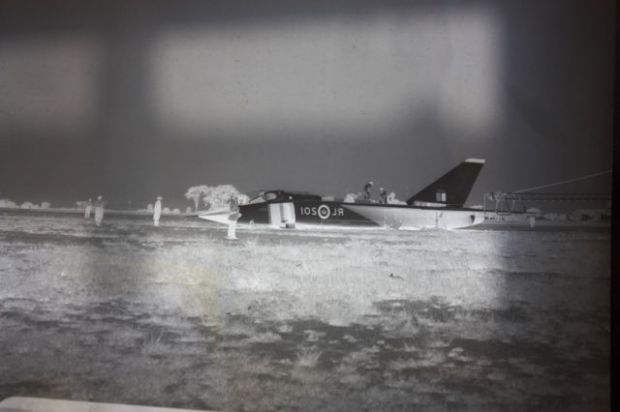 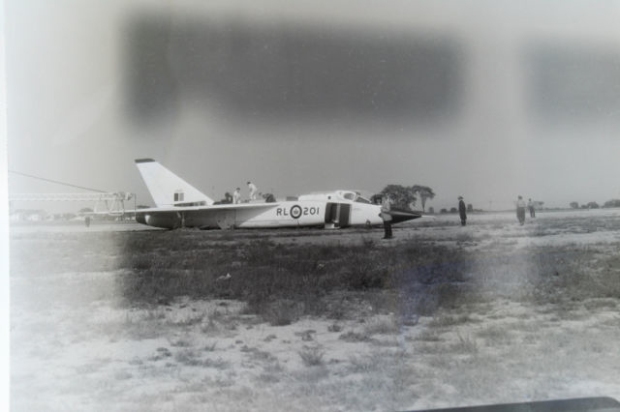 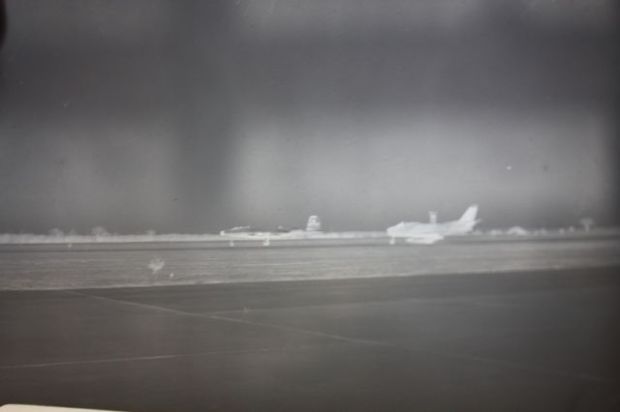 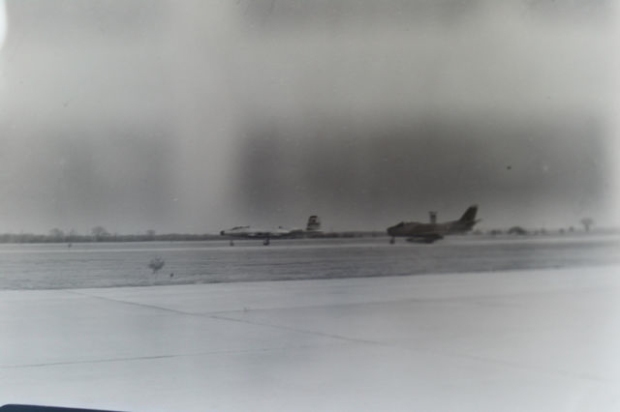 NEGATIVE 7 INVERSION: The two chase planes used by Avro to fly alongside the Arrow on its test flights, a Cf-100 Canuck and Cf-86 Sabre. 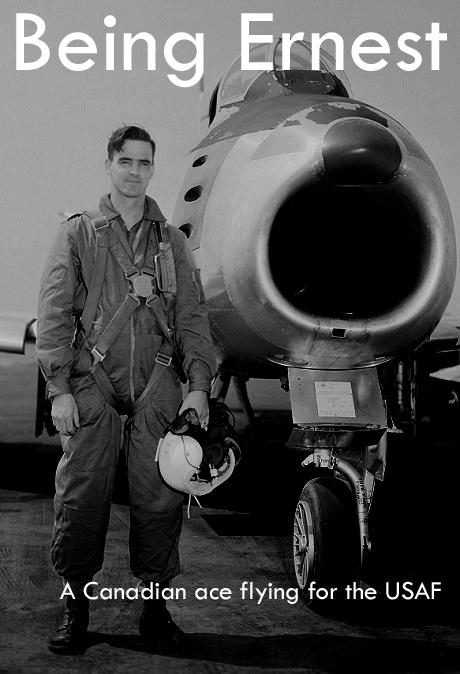 As another Remembrance Day approaches we reflect on those that served our country and sacrifices made throughout history’s conflicts. Yet often quietly and unintentionally overlooked are those that served in what has been dubbed The Forgotten War. A ghastly war that raged in the cold mountains of Korea from 1950 to 1953, it involved United Nations forces led by the United States against Communist forces of China and the Soviet Union. Almost 26,000 Canadians participated in the Korean War under UN command in both ground and naval combat roles with air combat limited to transport and supply missions. Well, sort of. It turns out that some Canadian fighter pilots with the Royal Canadian Air Force volunteered their services to the United States Air Force flying Canadian made Sabre jets against Soviet MIGs. One of these pilots was an Ottawa based fellow by the name of Ernest Glover, a man with a fascinating life story that I think needs to be told, a story that unfolds like a Hollywood film.

Ernest Arthur Glover grew up in Toronto and in 1940 at the age of 18 enlisted in the RCAF to serve his country during World War II, training near Hamilton to become a pilot. Ernie soon got a taste of the war beingshipped to England where he was strapped into Hawker Hurricanes for night fighter missions. 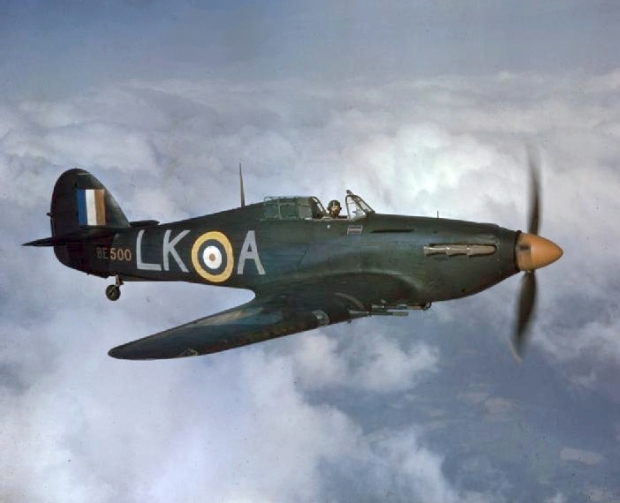 Gaining valuable combat experience in Hurricanes, Ernie soon moved into the more powerful and formidable Hawker Typhoon, flying fighter missions into occupied Europe. On one such mission in 1943 over France, Ernie was blasted by German flak that downed his Typhoon forcing him into the hands of the Germans and a Prisoner Of War. 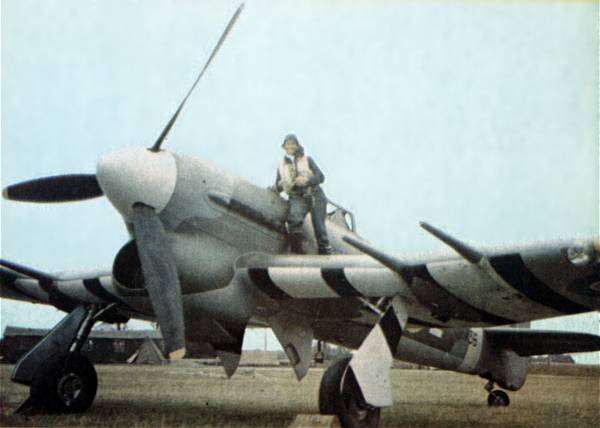 Ernie Glover advanced into the more formidable Hawker Typhoon, but in 1943 was shot down over France and became a PoW.

Ernie found himself a PoW at a place called Stalag Luft III. This German PoW camp is better known as the site of The Great Escape and contained captured Allied airmen who worked tirelessly to tunnel their way out of the prison camp. Their exploits were made into a 1963 film starring Steve McQueen, “The Great Escape”. Ernie was present during the Great Escape but remained confined at Stalag Luft III until the end of the war. 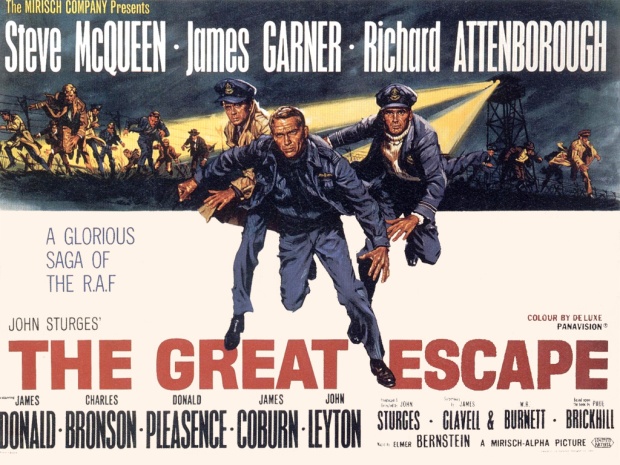 Glover was a prisoner at Stalag Luft III, the prison camp that was the scene of the Great Escape, later made into a Hollywood film.

After being liberated from Stalag Luft III Ernie returned to Canada where he worked for Dominion Bridge in Montreal. Ernie could not seem to keep his feet on the ground and in 1948 re-enlisted back into the RCAF and in 1951 came to Ottawa to fly the new Vampire jets stationed at Ottawa’s Uplands Air Force Base. 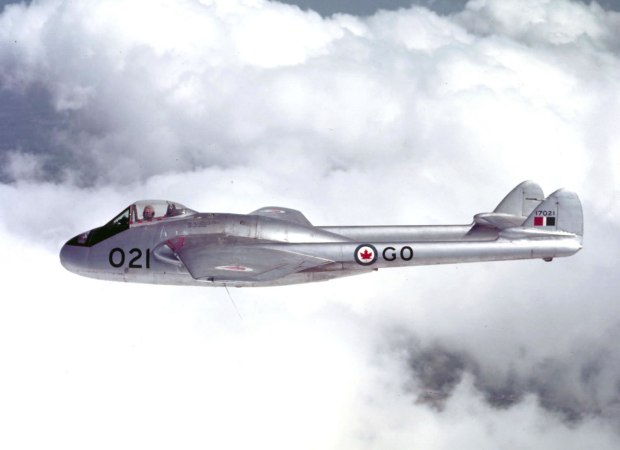 Upon being freed from prison camp in Germany, Ernie returned to Canada and in 1951 flew Vampire jets in Ottawa.

Mastering these new jet engined fighter craft, Ernie volunteered with 22 other RCAF pilots to join the Americans fighting in the skies above Korea. You see, the best fighter jet in the world at the time was the F-86 Sabre, and Canada was producing their own variant called the Canadair CF-86 built in Montreal, of which many were being sent to Korea for service with the USAF. RCAF pilots were unable to join the air battles over Korea in their own Canadian Sabres, but in 1952 as volunteers fighting under the American flag these 22 Canadian pilots got their wish to experience the mighty Sabre in combat. Ernie Glover was one of these eager pilots, and he joined the USAF 334th Fighter Squadron in Korea. 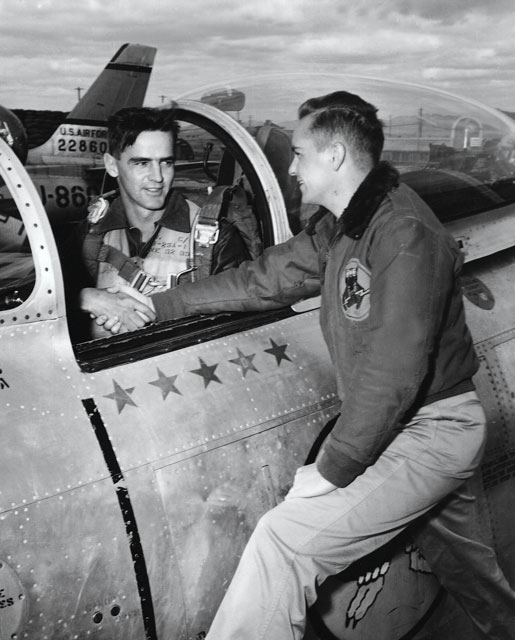 Ernie Glover (left) in the cockpit of a Sabre jet in Korea flying for the USAF. (photo:Legion Magazine)

Now in the Sabre, Ernie soon engaged Soviet made MIG fighters on an almost daily basis under treacherous flying conditions. Dog fighting in “MIG Alley”, a dangerous zone of air combat where the Sabres and MiGs would battle it out in what was to be the first large scale jet to jet aerial combat scenario, RCAF pilots in USAF marked Sabres flew over 900 combat missions with 9 confirmed MIG kills. Ernie happened to down 3 of those nine MIGs, the highest score of any RCAF pilot in Korea making him a distinguished combat pilot. 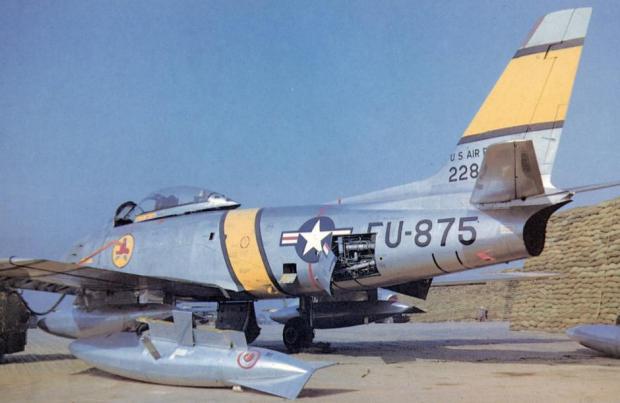 F-86 Sabre jet of the USAF 334th Squadron in Korea of which Glover flew 58 combat missions.

Ernie flew a total of 58 combat missions and the Americans recognized Ernie’s air combat skills in the Sabre and awarded him the American Distinguished Flying Cross, a medal reserved for those with “the Air Corps of the Army of the United States, who distinguishes himself, or herself by heroism or extraordinary achievement while participating in an aerial flight.” Ernie shared his American DFC with the likes of Jimmy Doolittle, Amelia Earhart, Buzz Aldrin, and John Glenn. Ernie was also awarded the Commonwealth Distinguished Flying Cross, the very last RCAF pilot to do so for his service in the skies over Korea. 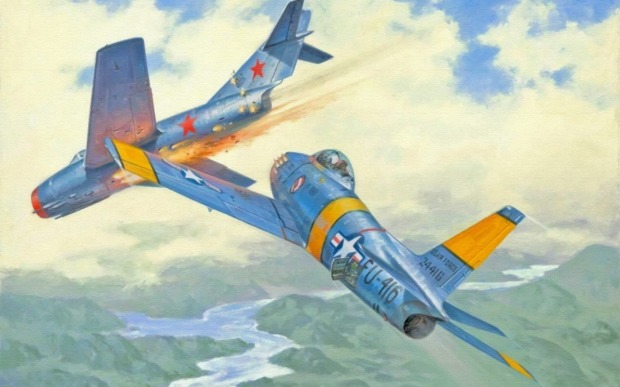 Ernie Glover shot down 3 MiG fighters and was awarded the Distingusihed Flying Cross by the Americans for his service in Korea.

After completing his 58 missions in the American Sabres, Ernie returned to Ottawa to fly Canadian Sabres now outfitted to 422 Fighter Squadron at Uplands RCAF Air Base south of the city. 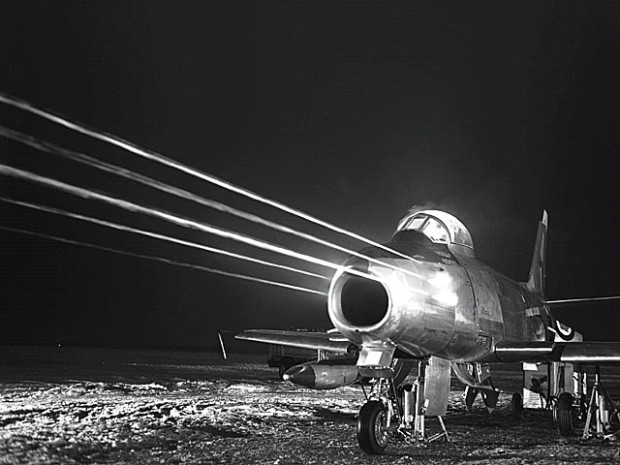 A Canadair CF-86 Sabre at Uplands Air Base in Ottawa.

Returning to the familiar cockpit of the Sabre in Ottawa, and almost 20 years after he was last there, Ernie re-visted the skies over Europe with the RCAF in Germany.  Also flying other aircraft, Ernie was later stationed in Trenton, On where he finally retired from the RCAF in 1970 after 30 years of service.

A crashed CF-86 Sabre from Uplands that exploded after hitting the ground near Manotick.

Ernie left fighter jets to take on small town life in Frankford just north of Trenton. Having been a fighter pilot in World War II, shot down in Europe, a PoW in the Great Escape prison camp and a decorated Canadian Korean War air ace flying with the Americans, Ernie seemed almost invincible. Almost. Having survived all these battles, Ernest had one last battle to fight but was later admitted to hospital in 1991. Ernie Glover, the little known Ottawa ace, made a final flight to other skies on September 9th in a Belleville Hospital. His life’s journey was most definitely an earnest one. 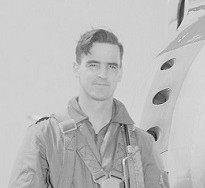