UPDATE JUNE 2018: In an email exchange with the NCC (who manage this monument), it was relayed to me that “when the NCC’s mandate was modified back in 2013, all the historical information related to interpretation, commemorations, public art, events etc. was transferred to the Department of Canadian Heritage. For this reason, the files that we still maintain, do not contain the detailed interpretation plans for Major’s Hill Park.”

Being the nation’s capital, Ottawa is filled with many curious structures, from incredible museums to stunning historical architecture that fills the downtown core. Yet there are other intriguing structures that go unnoticed unless a more detailed and closer inspection is made, structures that are mysterious in nature and without clear explanation. 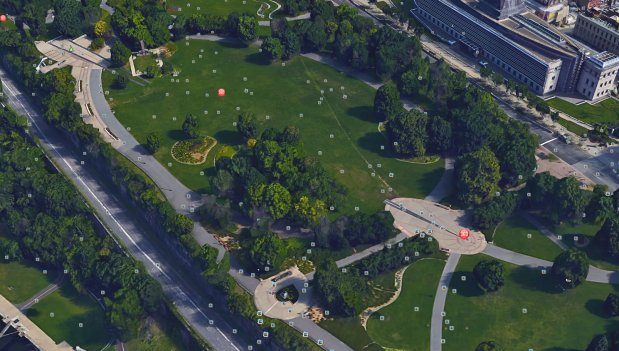 This image from Google Earth shows the elliptical concrete pad at the lower right and the secondary structure in the top left. (Google Earth)

Once such structure is a bizarre concrete pad in Ottawa’s scenic Major’s Hill Park. I’ve walked over it many times, but have never noticed until now the oddity of the whole thing. A glimpse at it from an aerial image illustrates its very esoteric nature.

The concrete pad has a circle with divisional lines and a single dark line pointing towards the northwest. (Google Streetview)

It is a carefully crafted solstice monument which interprets an event that has been celebrated among many ancient cultures such as the Mayans, Egyptians and Celts. Various rituals around the solstice follow themes of religion or fertility, but why is an unmarked secret solstice structure in downtown Ottawa?

I have previously investigated another odd solstice site in Ottawa at the former City Hall island, in which its pyramids mysteriously align with the Solstice.  Now another site has been found, this time in Major’s Hill Park across from Parliament Hill. The park is owned and maintained by the National Capital Commission who states “Major’s Hill Park is the Capital’s first park and has been a green space since 1826 when the building of the Rideau Canal began. In 1867, fireworks and bonfires at Major’s Hill Park marked the Capital’s first Canada Day celebrations.”

An aerial image shows the odd oval (lower right) with emanating lines/black line from a marked circle. The corner of the stone ruins of Colonel By’s original home intersects the secondary “runway” across the park, top left. (Google Maps)

The park was once occupied by the labourers of the nearby Rideau Canal and more notably it was the official residence of Lieutenant-Colonel John By until he returned to England in 1832. Once referred to as “Colonel’s Hill” Captain Daniel Bolton replaced Colonel By and he moved into his old house. Bolton was later promoted to “Major” and since then the area has been called Major’s Hill. The ruins of the original stone structure were later unearthed and are part of the park today.

Curiously, Google Earth has placed a 360 Sphere marker at the centre of the circle of the park’s oval.

After researching the odd elliptical concrete pad at the south end of the park to determine why it was built in such an intriguing manner, I found nothing about who designed or built it so I turned to aerial imagery to see what was going on. Sure enough, it has a very specific alignment. Applying the Sun Surveyor app to the site it was revealed the structure is part of some bizarre summer solstice monument that spreads across the park. 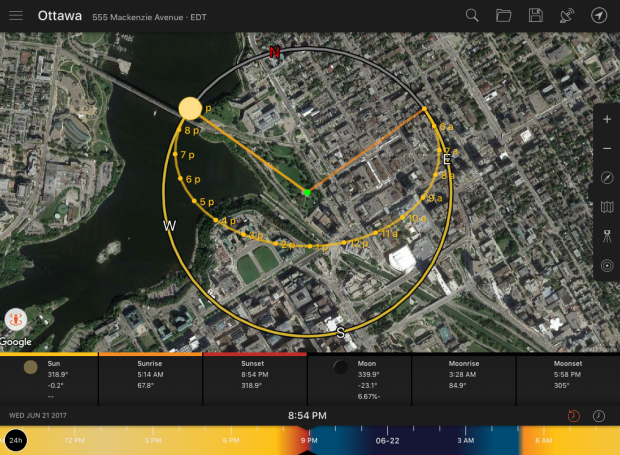 The calculated line of sight for the setting sun on the Summer Solstice from the primary concrete viewing pad that intersects three other structures. (Image: SunSurveyor)

The oval shaped concrete pad is divided into emanating lines from a marked circle with a distinct black line with dashed white lines that points to the north west. If you stand in the centre of the circle and look down that black line, your sightline carries across the park further away to a secondary concrete structure that also contains an odd “runway” that resembles an airport landing strip. This secondary runway area intersects with the stone ruins of Colonel By’s original home. 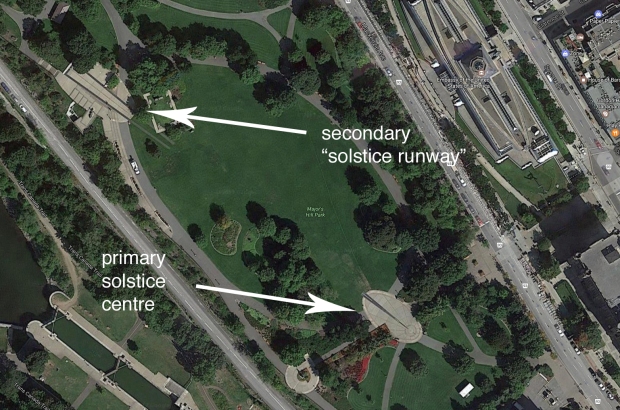 The view looking back towards the primary oval from the secondary solstice runway. Note Col.By’s home ruins to the left of the end of the runway strip. (Google Streetview)

Once the summer solstice date of June 21 has been computed into the application we can see that the whole structure is in alignment with the setting sun on the date of the Summer Solstice. What this means is that if you are standing in the centre of the circle on the primary concrete pad looking down the black line as the sun sets on the summer solstice you would see the sun disappear in alignment with the pre-calculated and constructed concrete “runway” that stretches across the park. 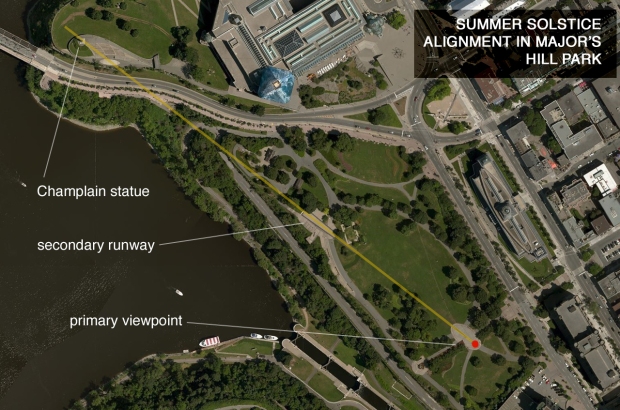 The path of the setting sun on the Summer Solstice as seen from the primary viewing pad showing the dark line pointing NW on the date of solstice. (Image SunSurveyor)

Now what is really fascinating, is that if you extend that sightline even further, past the secondary runway, the line perfectly intersects with ANOTHER curious structure: The statue of Samuel deChamplain at Nepean point. One alignment match could be coincidence, two is unlikely, but THREE alignment hits makes this a very planned, and deliberate calculated alignment. But why on the Summer Solstice would there be an alignment with the very prominent statue of Samuel DeChamplain on Nepean point? 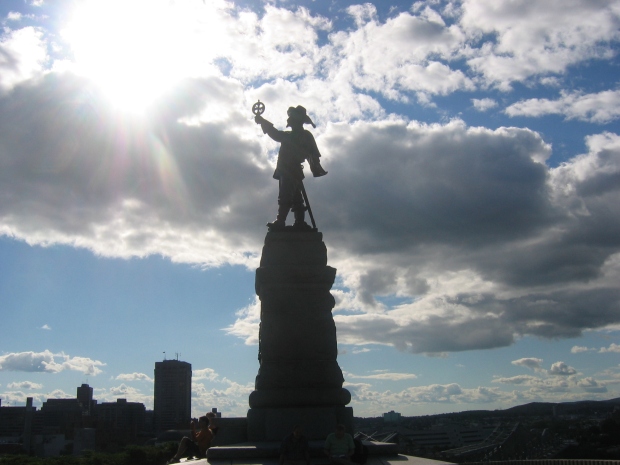 Statue of Samuel De Champlain at Nepean Point. On the Summer Solstice, an alignment with the sun and a viewing platform occurs. (Image: Wikipedia Commons)

Champlain is known as the “The Father of New France”, a navigator, cartographer, draughtsman, soldier, explorer, geographer, ethnologist, diplomat, and chronicler. He founded New France and Quebec City on July 3, 1608. This is what the history books tell us, but what could be one of his greatest secrets is that Champlain was a part of the ancient order of the Knights Templar, sent to North America to establish a new “base of operations” for the Knights of Malta, a derivative of the Templars after their disbanding in 1312.

The Knights Templar had a strong presence in a place called La Rochelle in France and it was their largest base on the Atlantic Ocean, also where they stationed their main fleet of ships. Whether by coincidence or by connection, Champlain inherited a substantial estate at La Rochelle.

CHAMPLAIN’S CONNECTION TO THE KNIGHTS

In a book written in 1890, “History of the Knights Templar of Canada”, compiled by the historians of the Order, there is a chapter devoted to the early knights exploits to North America. Champlain is stated to be the first of the Knights to reach Quebec.

Now what is completely fascinating is a detail of Ottawa’s Champlain statue, erected in 1915 and sculpted by Hamilton McCarthy, who incorrectly placed Champlain’s astrolabe upside down in his outreached hand. Why is the astrolabe so prominently displayed incorrectly and in perfect alignment with a series of other structures on the summer solstice? Is there a connection to the order of knights Champlain was associated with?

Well a closer look at the astrolabe shows a unique shape that curiously resembles another recognizable symbol, that of cross of the Templar Knights. Coincidence? 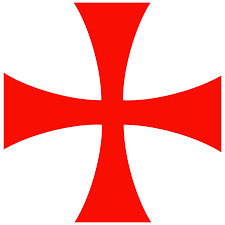 This is all fun speculation, but now we have FOUR odd coincidences all linked to Ottawa’s grand summer solstice monument. A day revered by the Templar knights commemorated with ceremony to mark re-birth and fertility, all part of the ancient Order’s doctrine.

It seems too much of a coincidence that all these elements are associated together, all at one place and at one very specific time. A very carefully constructed, but unknown solar solstice monument that aligns with the statue of Champlain in the Nation’s Capital seems to be the work of someone that knew full well of this occurrence and worked it into the landscape for reasons that are not clear.

A composite view of what the setting sun would look like setting on the date of the Summer Solstice, bizarrely in alignment with the park’s concrete runway structures.

Why anyone would go to so much trouble to construct a very esoteric unmarked solstice monument linked to Champlain is beyond me, but perhaps the NCC can can answer that question as they are the ones that own the park and constructed this unusual monument.

Is it a curious coincidence or is some organization positioning secret solstice markers throughout the nation’s capital?  As winter continues its icy grasp on the residents of Ottawa, one can only assume it is to celebrate the warmth and rebirth the summer solstice has brought to us for so many years.