In Tulsa, Oklahoma there is a museum that lies on the outskirts of town, and unbeknownst to many, it houses the world’s largest, most comprehensive collection of art of the American West.  Also within its collection is a book that one Thomas Gilcrease purchased from a bookseller in London, England back in 1949. The book turned out to be a rare, illustrated manuscript depicting life in New France in the 1600s as sketched by a French Jesuit by the name of Louis Nicolas on this travels throughout New France in the late 1600s. This fascinating manuscript over three centuries old remains in the Gilcrease Museum, and is one of its oldest documents. It is called the CODEX CANADENSIS. 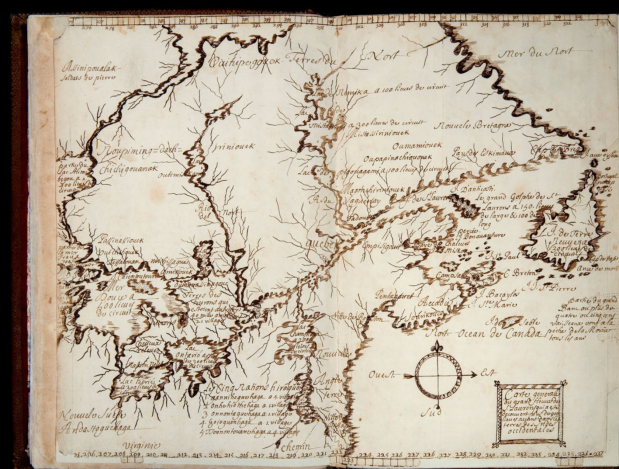 The inside of the book cover depicts a map of early Canada circa late 1600s.

The book contains 180 drawings that depict indigenous people of North America as well as the animals, birds and plants of New France in the late 17th century. These original drawings were sketched on parchment with brown ink and watercolour.

Such documentation of what Canada was like in the 1600s with pictorial representations are extremely rare, which makes the Codex canadensis an invaluable record of that time period in Canadian history. It is interesting that this significant artifact is not in a Canadian museum.

An interesting depiction of native sailing vessels, which you normally never hear about.

The Codex is an incredible compendium of indigenous life, with its sketches representing many different communities, from Algonquin to Iroquois, their dress, watercraft, cabins, and body decorations all wonderfully represented through Nicolas’ sketches. It is completely mind-blowing to know that such a record of this period exists.

I visited the Gilcrease Museum’s online resources, and the Library and Archives Canada, which has a digitized version of the Codex here. Oddly, all the images online are out of focus, low resolution images. However, if you manipulate the website address of each image by replacing the image number in the address bar with an X, you will get a high resolution version that allows a closer examination. I have done this to a select group of its pages, and I present these here for you to examine. Enjoy this amazing glimpse back in time!

UPDATE: Joesph from the Gilcrease Museum contacted me and provided this information for readers wishing to gain full access to the hi-res images of the Codex. Instructions are as follows:

1.Go to the object page: https://collections.gilcrease.org/object/47267
2.Select Download, just above the image (you will need to create a profile if you don’t have one).
3.Choose the option ‘Compressed archive (.ZIP)’ and click download.
These are 4000 pixel images on the longest side, but are downsized to 72dpi/ppi (so fairly similar to the ones you are finding using the method you described).
Hope this is helpful for people looking to download the whole set.
Kindest Regards,
Joseph (DBA at Gilcrease) 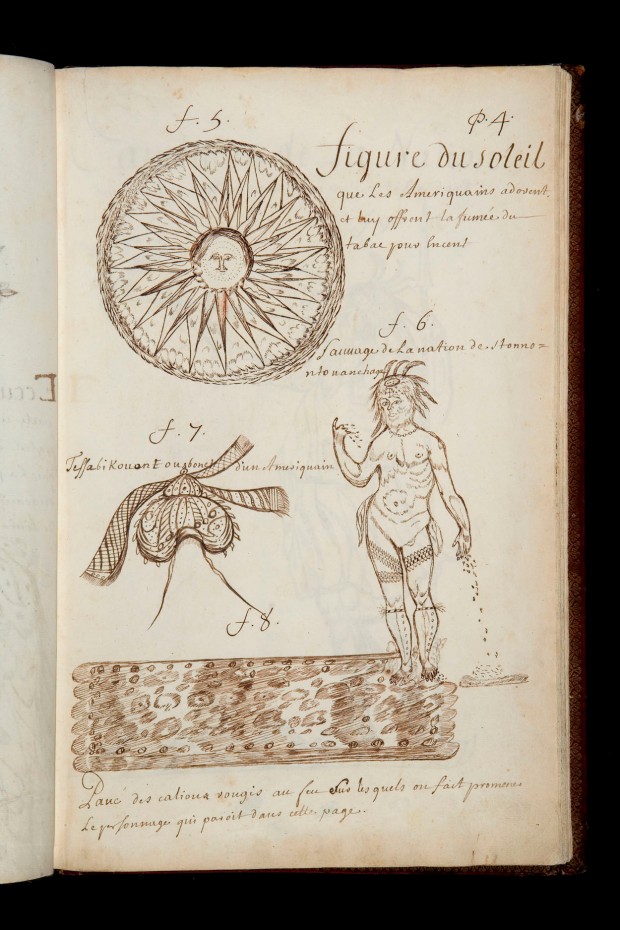 A sun diagram, with a native sowing seeds. 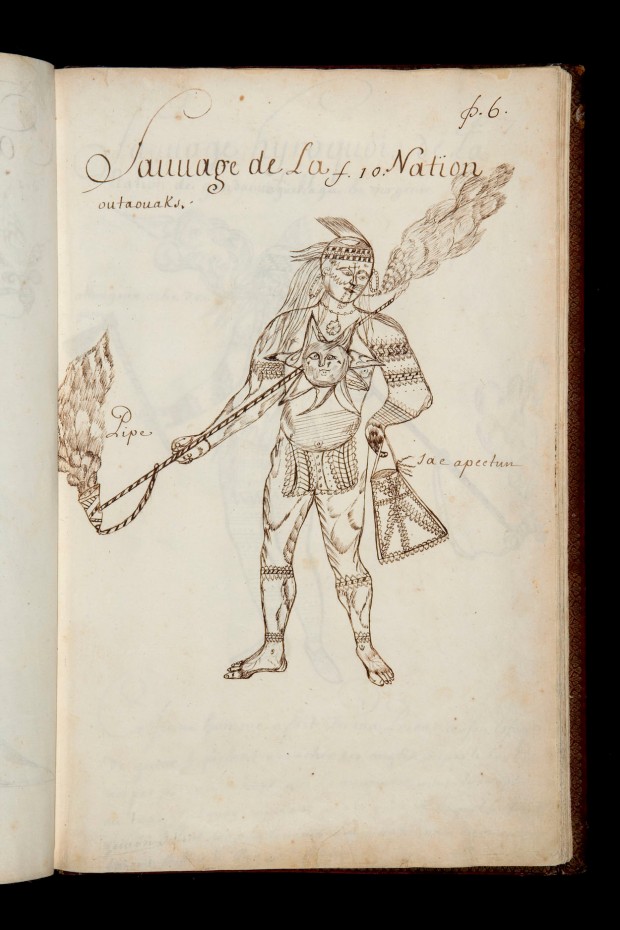 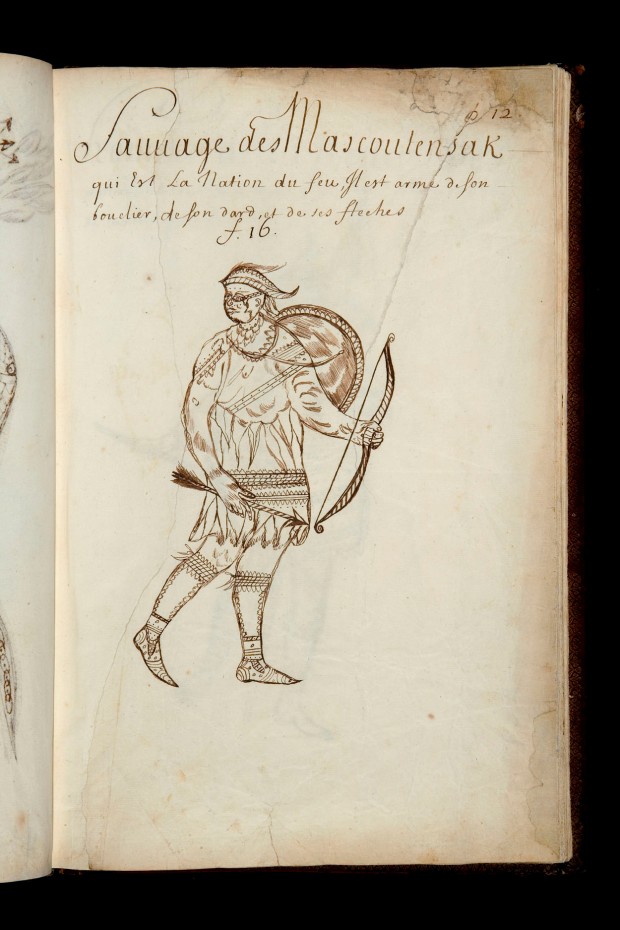 ummmmm. I guess we had unicorns in the 17th century here in Canada? 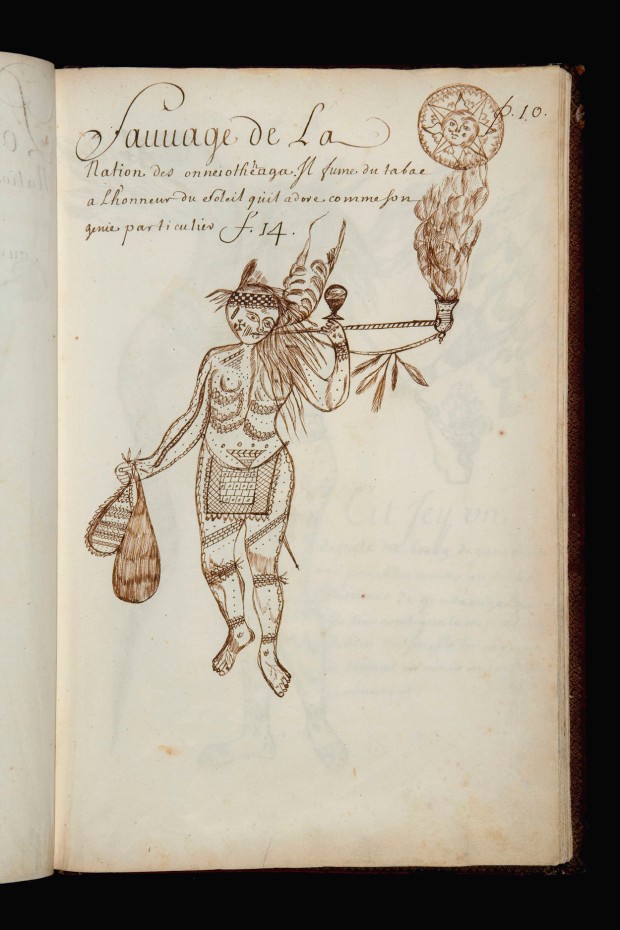 It is interesting to note that on all the images of the native people, there is a “cross” symbol marked on their heads…what would this be a representation of? The Jesuit cross? An indigenous symbol? 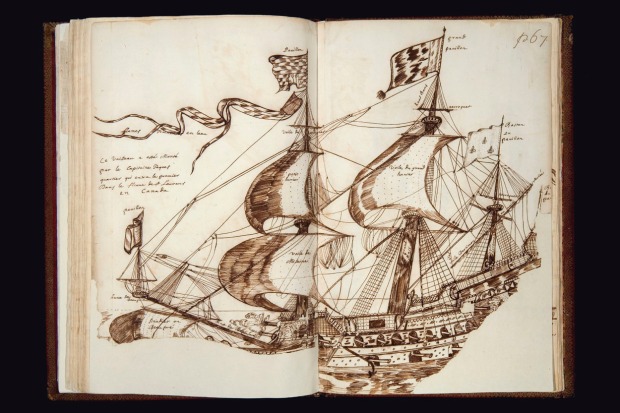 There’s even a drawing of Jacques Cartier’s ship that arrived in 1534!