Cairns are an interesting form of marking a special place. The word cairn comes from the Scottish Gaelic word, “càrn”, and have been used for a variety of purposes from prehistoric times.

In Prince Edward County, known for its blossoming vineyards, there is a winery called “Chadsey’s Cairns” named after Ira Chadsey, a late 19th century farmer who built stone cairns at the back of the property claiming they would guide him home in the afterlife when he returned as a white horse. The stone cairns were more likely fence posts of field rubble, piled there by Ira clearing his fields, but the story is a legend in the County. 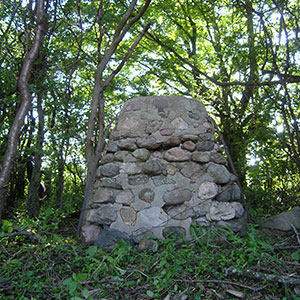 There is another cairn in the County with an equally interesting legend, that of a cairn being erected on the highest point in all the land. On a beautiful, sunny June day I thought it would be fun to try and find this cairn that marks the “Peak Of The County”.

A modern topographic map shows the “high” area in white.

Apparently located in Ameliasburgh Township on the west side of the island, our first stop was the Ameliasburgh Heritage Museum to look for clues. An amazing museum that recreates 19th century County life, many historic buildings from around the County were moved here, which you can enter and visualize what early life must have been like in the County.

Not finding much, I checked Google to see what kind of topographic map I could find that may show the highest point in PEC. A map from what looks to be from the 1950s shows the topography of the county and there on the map was the typical “pyramid” symbol that denotes some kind of survey marker. 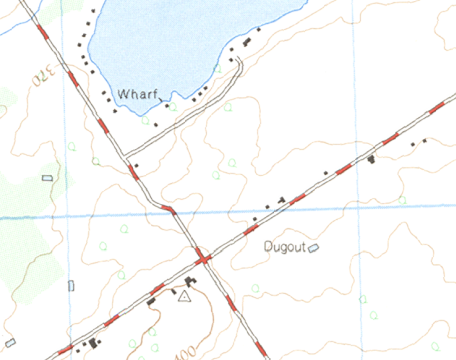 A “pyramid” symbol denotes a high elevation marker on this old topographic map of the County.

That pyramid likely marks the spot where a geodetic survey marker was placed, called a “horizontal control point” indicating the highest elevation in an area, this case being Prince Edward County.

Noting the location, just south of Ameliasburgh, we headed in that direction visually scouting the land looking for what could be the highest point. Guessing one side of the hill near Salem and Whitney roads, we scoured the scrub brush and scanning the overgrown field, an obelisk was soon visible. We had found the cairn.

Standing about 4 feet high, the concrete obelisk has now been consumed by nature, overgrown, and hidden from view. Unless you knew of it, it would be lost in time forever, sitting like a quiet sentinel on a windswept peak of Prince Edward County. Likely erected when the survey maps data was compiled in 1927, this almost one hundred year old cairn remains intact, yet concealed by the bushes that surround it. 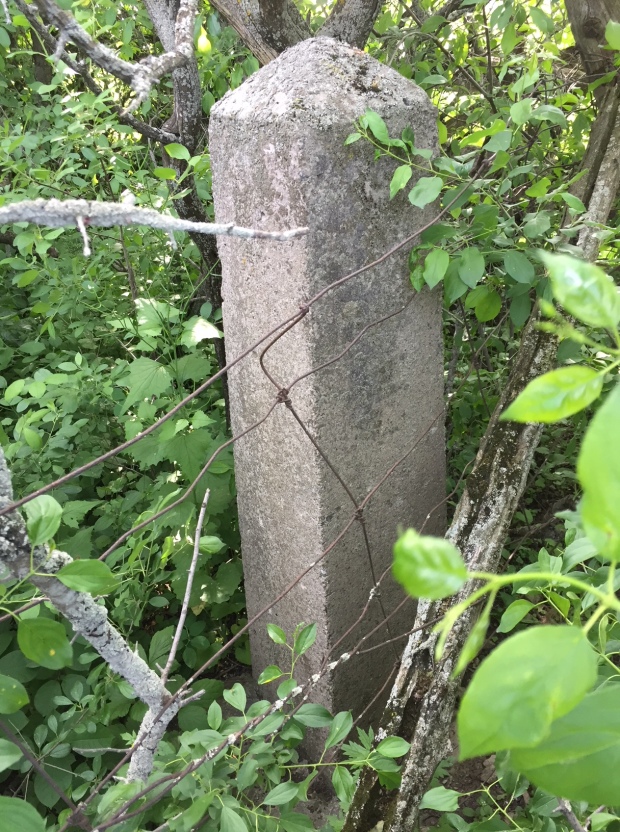 Likely built in the 1920s to mark the high elevation point, the concrete obelisk is quietly hidden in the overgrown hilltop south of Ameliasburgh.

However, a quick fact check as to whether this really was the highest point in the County showed that it was not, as it is noted to be at 122m elevation, but another pyramid on the map near Glenora showed an elevation of 156m!

This area near Glenora looks to be the HIGHEST point in the County, but if there is a cairn there, it is inaccessible by road.

Checking the old topographic map there is indeed another pyramid symbol near Glenora, but that cairn, if there, is in a completely inaccessible area. Perhaps another adventure for another day.

The Saint Lawrence Seaway, that opened for marine traffic in 1959, is a system of canals and locks that allows oceangoing vessels to travel from the Atlantic Ocean, down the St. Lawrence River and into the Great Lakes. 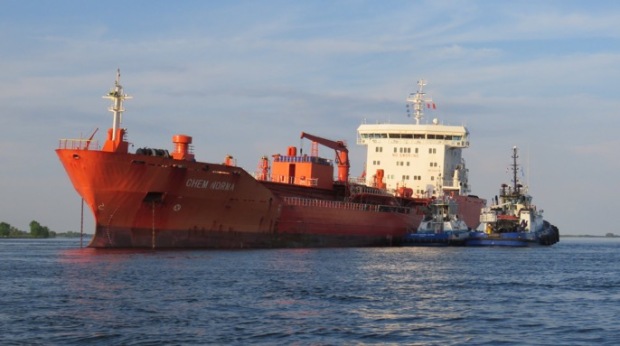 Listing to one side aground on the ruins of an old submerged village. (Image @SeawayNNY:Suzy Austin)

There is a currently a 145metre oil/chemical tanker that has run aground off the town of Morrisburg south of Ottawa, and it is still stuck there. What is trapping the vessel turns out to be the submerged ruins of an 1800s lock system, part of the now submerged ruins of a flooded village.

Trapped on the ruins of the old lock submerged below. (photo credit: @SeawayNNY: Suzy Austin)

In the 1950s in order to necessitate the building of the St. Lawrence Seaway, over 80 homes were moved and the entire downtown business district of Morrisburg was demolished and relocated to a shopping plaza. The CN railway line was moved 1.1 kilometers north of its original location. Countless historic buildings and other heritage artifacts were moved and assembled to create Upper Canada Village, a theme park tribute to the area’s first pioneers. 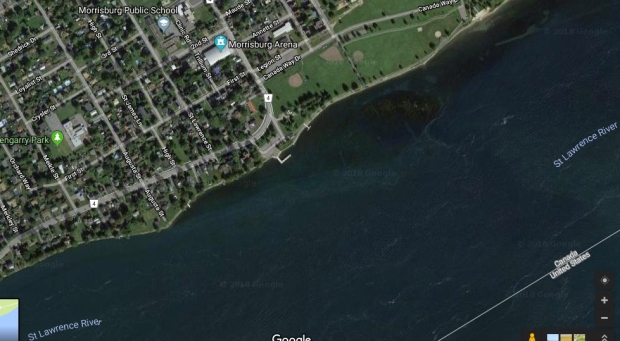 Current Google Map of Morrisburg, submerged portion of the village is shown in darker blue.

So how do we know if it has hit part of the old submerged village? We go to the maps.

I took a screen grab of the aground freighter’s position on Marine Traffic App, “The Chem Norma” is registered from the Marshall Is.

Then using that app map, we can overlay it on a current google map…to match it up where it is exactly. 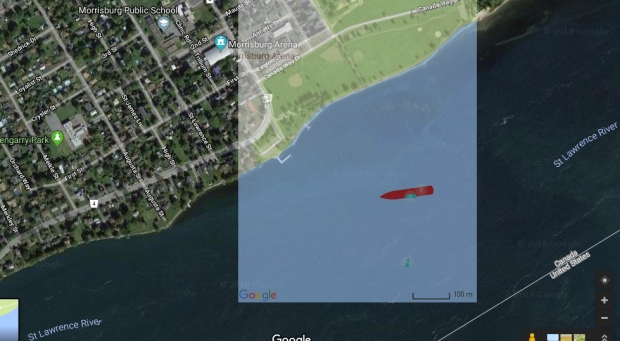 Then taking a pre-flooded aerial view of the town of Morrisburg, (it was partially flooded out for the St.Lawrence Seaway Project Of The 1950s) we can see what used to be there…

…and what used to be there was a massive OLD 1800s lock system and docks that serviced the old town of Morrisburg. It now lies submerged off the current shoreline, LOCK 23….and this is what the freighter has hit and is stuck on.

So there you have it, a modern day freighter ship trapped on the submerged remains of an old town and its locks, lying in the watery depths below. 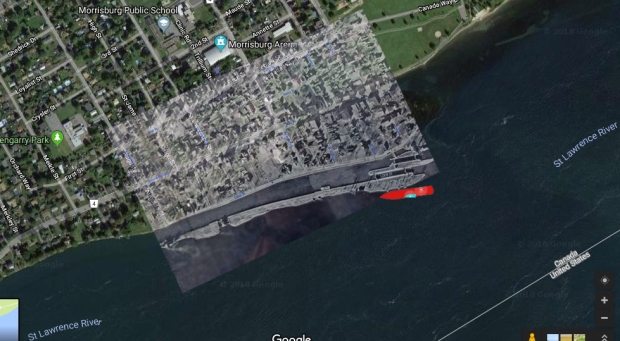 Here is a photo of what the freighter has run aground on, before it got flooded. (image: Morrisburgdivesites.wordpress.com)

It seems history has come back from the depths to take hold of a modern ship.