Setting sail on a clear sunny day in late June 1900, Captain Sidley along with his 12 year old son Vessy left Rochester, New York aboard the 100 foot schooner “Picton”. With a crew of five and a cargo of coal bound for Canada, the ship picked up speed heading across Lake Ontario with two other boats following close behind. A strong wind blew across the lake, taking the topsail off the Picton when the two following ships witnessed the Picton suddenly vanish before them, as if being sucked to the bottom of the lake. Catching up to where the schooner had apparently vanished, all that remained was a sailor’s cap and some floating deck debris.  No trace of the Picton or her crew were found until weeks later when a boy discovered a bottle bobbing in the waters off Sackett’s Harbour, NY. Corked and sealed with wrapped wire, inside was a pencil scrawled paper note with the words: “Have lashed Vessy to me with heaving line so will be found together. -J.Sidley, Picton”. This is the story as told by a plaque inside the Mariners Park Museum in Prince Edward County. 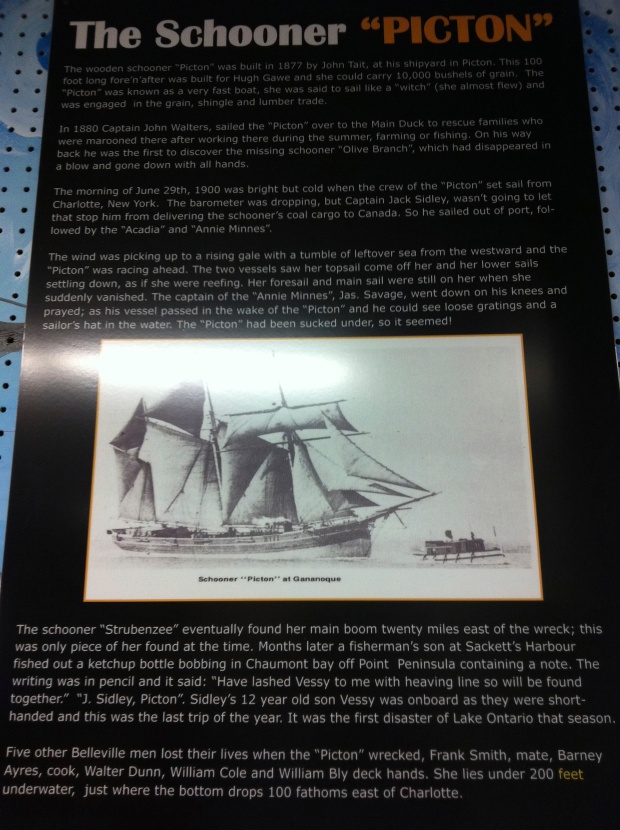 Along with countless other lost ships, the story of the ill-fated Picton is part of a local legend known as the Marysburgh Vortex, an area of Eastern Lake Ontario that has claimed over 100 vessels over the last two centuries. Bizarre tales of ships and their crew disappearing have been attributed to the Marysburgh Vortex, defying explanation for just as long. Having myself grown up with the legend living on these shores for most of my childhood, I decided to take a closer look at this “Bermuda Triangle of the North” to see what could possibly be behind this enduring folklore. 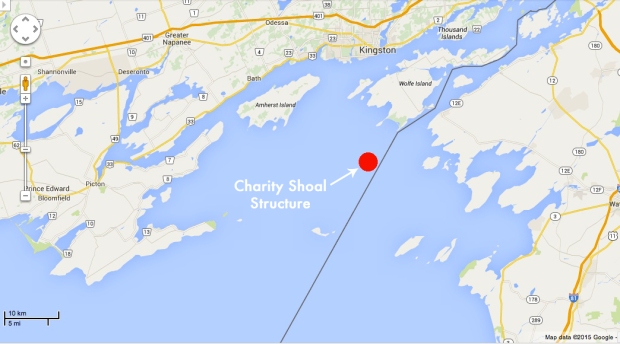 I grew up sailing with my family on eastern Lake Ontario, plying the waters of the “Marysburgh Vortex” and on numerous occasions witnessed our boat’s compass erratically alter direction along with terrifyingly swift changes in weather. Navigational charts become a trusted aid in making your way through these unpredictable waters, and on them is a warning: “MAGNETIC ANOMALY: ANOMALIES IN THE VARIATION OF THE COMPASS READINGS MAY RANGE FROM 27degrees WEST to 3degrees EAST”

This magnetic anomaly of the the area, and in other parts of the world, had both the Canadian and American governments looking into magnetic field disturbances under a program code-named PROJECT MAGNET. Initiated in 1950, PROJECT MAGNET was established by the Canadian Department of Transport, the Defence Research Board and the National Research Council (NRC) trying to determine characteristics of the Earth’s magnetic fields. A similar American study, also code-named PROJECT MAGNET, started a year later, and according to the website of the NATIONAL GEOPHYSICAL DATA CENTRE “The U.S. Navy, under its Project Magnet program, continuously collected vector aeromagnetic survey data to support the U.S. Geospatial-Intelligence Mapping Agency”. This US Navy led program continued operations until 1994 researching the nature of Earth’s magnetic fields using Lockheed Constellation aircraft equipped with highly sensitive electro-magnetic sensing equipment. The findings from this 60 year PROJECT MAGNET study according to the NGDC were assembled to simplify the work of scientists performing regional and global geophysical studies, including research into the nature of Earth’s magnetic field. 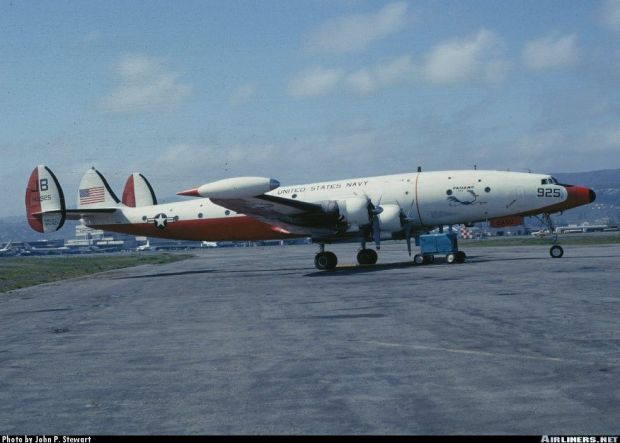 Looking at a current marine navigational chart of the area there is a noticeable and unusual feature that could provide an explanation for these odd magnetic anomalies. Noted as “Charity Shoal”, a ringlike shape 25 km south of Kingston, ON is clearly visible on the bottom of the lake. Charted at a depth of 25 feet the ring-like structure is 1km in diameter, and is almost perfectly circular. Recently studied by the National Geophysical Data Centre and the National Oceanic and Atmospheric Administration (NOAA) whose website indicates they “provide stewardship, products and services for geophysical data describing the solid earth, marine, and solar-terrestrial environment, as well as earth observations from space.” The NGDC study of the ring-like structure below the waters of the Marysburgh Vortex reveal the following, as obtained from their study document: 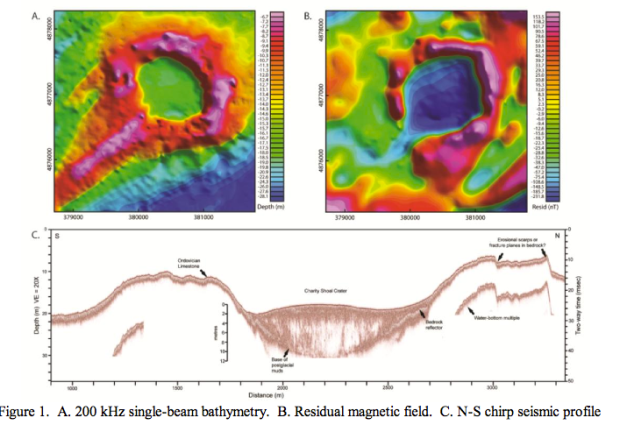 “A small equidimensional circular depression 1000 meters in diameter, with a continuous encircling rim, coincides with the feature referred to as Charity Shoal on nautical charts. An elongated ridge extends southwest from the feature, resembling the tail of a crag-and-tail feature common to some drumlin fields. The basin is slightly deeper than 18 meters and the rim rises to depths of 2-6 meters. The origin of the feature remains unknown. Although a sinkhole in the limestone terrane is a possibility, an origin related to a meteor crater, that was subsequently glaciated, seems more likely. Aeromagnetic mapping by the Geological Survey of Canada revealed a negative magnetic anomaly over Charity Shoal, which is a characteristic feature of simple impact craters.”

The Charity Shoal Structure (CSS) was studied even more recently in 2013 by the Universities Space Research Association, an independent, nonprofit research corporation who completed a comprehensive study of the ring shape. I obtained a copy of their research document that states “The origin of the CSS is uncertain but it has been interpreted as a an Ordovician age meteorite impact.”

That puts the underwater structure at about 460 million years of age. The 2013 USRA study conducted a detailed geophysical survey of the structure, creating a 2-D magnetic model to try and evaluate its origin. Their research shows that the underwater structure is defined by a ring-like magnetic high and central magnetic low with the total field magnetic anomaly being quite large which cannot be accounted for. The study then states “the anomalies large magnitude indicates a deep basin and/or demagnetization effects in the Precambrian basement rocks below the structure.” The conclusion of this study indicates that the structure is “consistent with a meteorite impact”. If this is the case, then the mineral deposits or deformation of the earth’s surface from a 460 million year old meteor impact could possibly give us further answers.

Contacting Dr. Richard Herd, retired curator of the National Meteorite Collection of the Geological Survey of Canada, Herd states the impact of such a meteor could “depress the earth’s crust and have brought up molten material from inside.” Herd also explains that meteors are of two types, a stoney meteor and an iron-nickel meteor, the latter being parts of small planets from when the solar system was formed.

If the structure is indeed a meteor impact crater, it would rival the Barringer Crater in Arizona, a structure of the same size with similar properties to the Charity Shoal Structure. The Arizona crater is the same size, and was formed when a nickel-iron meteorite about 160 feet in diameter hit the surface of the earth. An underwater study of Charity Shoal is necessary to provide the physical evidence of what the structure actually is and if it is indeed emitting a strong enough magnetic field to affect the navigational instruments of nearby vessels. 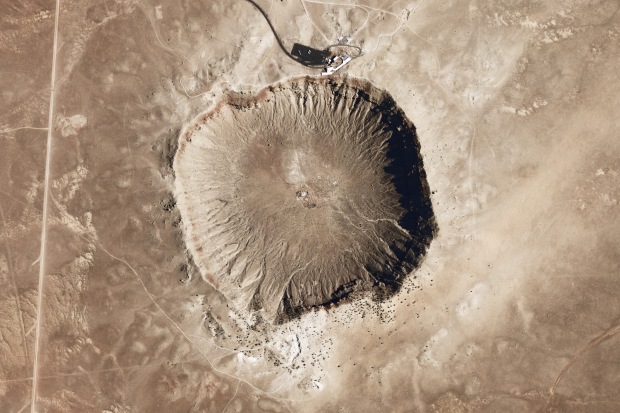 The legend of the Marysburgh Vortex continues to create mystery as recently as 2013 when it was reported that an unmanned sailboat was spotted drifting off the southern shore of Prince Edward County. A recovery crew was dispatched and found an empty boat, and according to the local newspaper The County Weekly News, the 32 foot sail boat “Persnickety” last sailed out of Sodus Bay, NY into Lake Ontario. The boat was found inexplicably drifting with no crew off Prince Edward County with all sails up, no signs of trouble and after a closer inspection by authorities, the operator’s drivers license, money, food, and ice in a cooler were found intact onboard. A three day rescue operation to locate the missing operator of the boat was unsuccessful and the operation was suspended with the reason for the disappearance unsolved. 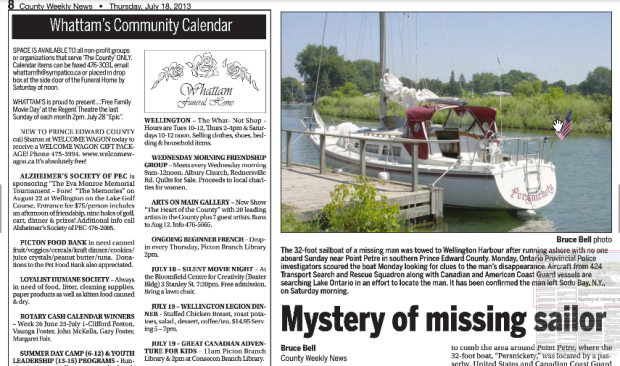 Perhaps this unique crater shaped structure on the lake floor is composed of meteorite minerals that affect the earth’s natural magnetic fields that in turn displace compass readings of vessels entering the vicinity, inadvertently sending them off course into unmapped shoals. With the advent of GPS and improved navigational aids, the frequency of ships disappearing has certainly diminished, but until what lies beneath is studied in greater detail, it seems the Marysburgh Vortex will continue to be a source of mystery for years to come.