“Deer Island” on the St. Lawrence River south of Ottawa is home to the “Skull and Bones” secret society initiation rituals. (image: BingMaps)

Steeped in historic secrecy for almost two centuries, the Skull and Bones society is an undergraduate secret society based at Yale University, New Haven, Connecticut. Under the corporation of the Russell Trust Association which owns the society’s real estate and oversees the organization and its “Bonesmen”, they also control an island 1.5 hours south of Ottawa.

The logo of the Skull and Bones Society with the number “322” underneath…supposedly signifying that members measure dates from the year 322BC instead of from the common era.

Founded in 1832 after a dispute among Yale debating societies Linonia, Brothers in Unity, and the Calliopean Society over that season’s Phi Beta Kappa awards, the Skull and Bones society has since had their assets managed by the society’s alumni organization, the Russell Trust Association, which was incorporated in 1856 and named after the Bones co-founder, Russell Gilman.

An early photo of the Skull and Bones Society with what is reportedly the skull and bones of Geronimo.

The first description of the Skull and Bones secret society was published in 1871 and it became known that Skull and Bones selects new members among Yale students every spring as part of Yale University’s “Tap Day” which it has done since 1879.

Deer Island, part of Skull and Bones lies in the St. Lawrence River about 1.5 hrs south of Ottawa. (Google Maps)

This society cloaked in secrecy, owns and manages Deer Island, an island retreat on the St. Lawrence River about 1.5 hrs south of Ottawa, where Bonesmen continue to initiate themselves on this island as they have done so since it was purchased by the Russell Trust Co. This forty-acre retreat is meant to give Bonesmen an opportunity to “get together and rekindle old friendships”, and it once boasted tennis courts and softball fields, surrounded by rhubarb plants and gooseberry bushes. It even hosted elegant meals, and it is said that all new Skull and Bones members still visit Deer Island as part of their initiation into the society. 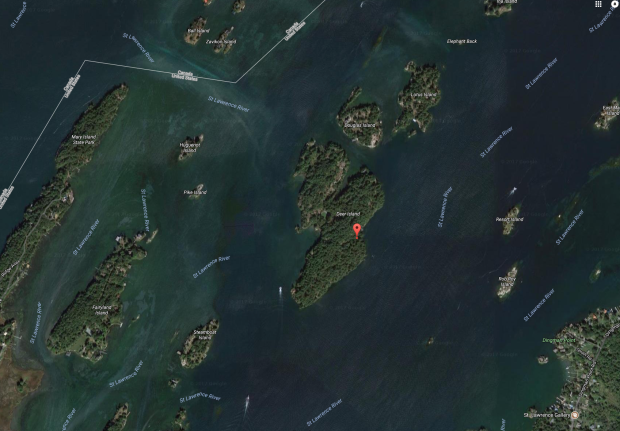 As seen from Google Maps.

Part of the  Thousand Islands, Deer Island is situated between mainland Canada and the United States, owned entirely by the Russell Trust Association.

It is rumoured that the remains of the Apache Chief Geronimo are housed on Skull Island who died of pneumonia 17 February 1909, at Fort Sill, Oklahoma.  Allegedly, grave robbers that were members of this secret Yale University Fraternity at the time, including Prescott Bush, father and grandfather of two Presidents of the United States, stole the skull and bones of Geronimo.

President Bush shown as part of the Skull and Bones Society.

The island of the Skull and Bones society has seemingly fallen into disrepair, most of its opulent buildings having been burned to the ground with its tennis courts lying abandoned and overgrown like something from the Great Gatsby.

Despite its decline, the island is still part of the Skull and Bones Society, and will continue to operate as a retreat for the Bonesmen, its mandate and operations shrouded in secrecy as they have been for over 150 years.