Canada’s “Loonie” coin was supposed to be much different than the one we know today, altered after a mysterious theft in 1986. The original dollar coin molds could still be hidden within Ottawa…

The “Loonie’ (maybe I should say “one dollar coin” since the Royal Canadian Mint in 2006 secured the rights to the name “loonie” according to the Canadian Trade-marks database and Canadian Intellectual Property Office) was conceived in 1982 when the Government of Canada wished to introduce a new dollar coin to eliminate the ol’ green one dollar bills.

Do you remember when a can of Coke cost $75 cents out of a vending machine but when the loonie® $1 coin came out, they magically went up to $1.00 in price? This is likely in part to the vending machine operators and transit system groups lobbying the Government of Canada to replace the old one dollar banknotes with a new dollar coin so their machines would not have to deal with the paper notes, just modify existing coin operated machines to accept dollar coins. Prices of everything from a can of pop to bus fare seemed to coincidentally go up to an exact one dollar amount, or loonie, after its introduction in 1987. That is another conspiracy for another time…

The government announced on March 25, 1986, that the new dollar coin would be launched the following year as a replacement for the dollar bill, thus saving taxpayers $200 million over 20 years. The new dollar coin was to be made so it matched the dimensions and weight of the American Susan B. Anthony dollar coin so it would be compatible with American manufactured vending machines being used in Canada.

The new dollar coin of 1986 was supposed to feature the Voyageur canoe that had been on coins since 1935.

A concept image of how the original Canadian one dollar coin was supposed to look when it was designed in 1986. (image by author)

The plan was approved, and the new dollar coin master dies were prepared in Ottawa to be sent to Winnipeg where they would be manufactured for circulation. But then…

In an effort to save $43.50 The Mint in Ottawa decided to use a local letter-courier firm instead of the usual high-security armoured service like Brinks to send the dies to Winnipeg. This decision would result in a historic turn of events.

As the dies were packaged to be shipped on November 3rd, 1986 the usual protocol of packaging each side of the coin’s dies separately was sidestepped for unknown reasons. The two dies were to be shipped in separate shipments. This security practice was in place so that if a die package fell into the hands of counterfeiters, they would only have one correct side of the coin. Yet, somehow, the new dollar coin dies were packaged TOGETHER and then went mysteriously missing. 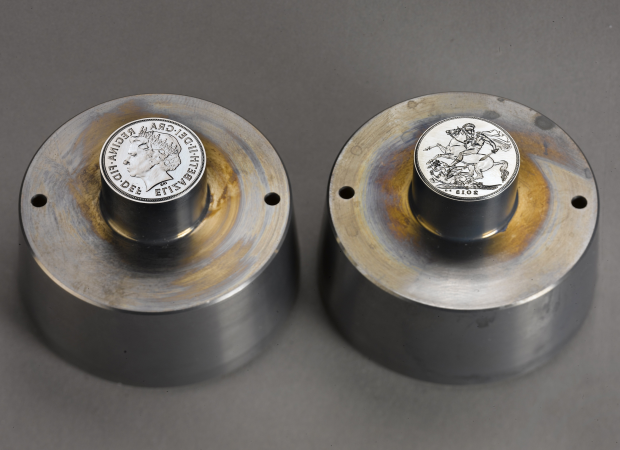 An example of a coin die pair, one for each side of the coin.

With the new coin dies supposedly in transit via this cheaper courier service, the Winnipeg officials waited 11 days but still no delivery. On November 14th the RCMP was called. The dies never made it from Ottawa. It seems they had been stolen before they even left the Nation’s Capital.

Scrambling, the Royal Canadian Mint decided to keep the heist under wraps from the public in hopes they would turn up, but alas they did not. They even withheld the theft from Monique Vèzina, the minister of the Department of Finance, which was responsible for the mint’s operation.

For several weeks, the lost coin stymied officials who considered making a minor variation to the voyageur design that could possibly reveal the thief’s location. It was thought the risk of counterfeiting was too great so it was quickly decided to use a new design, replacing the voyageur with a loon.

Robert-Ralph Carmichael who created the “Loonie” image for the coin (image: Canadian Geographic)

That loon image was done by artist Robert-Ralph Carmichael who had submitted it in 1976 for a $100 gold coin, but it was rejected. In desperation to get the new dollar coin in production, Carmichael’s once discarded image of the loon was decided upon for the new dollar coin and soon its dies were rushed off to Winnipeg (not using a discount courier) to be minted.

Six months behind schedule due to the Ottawa heist, the new “loonie” as we know it today was launched on June 30th, 1987. The bronze-plated nickel coin had 40 million units introduced into major cities across Canada that year. 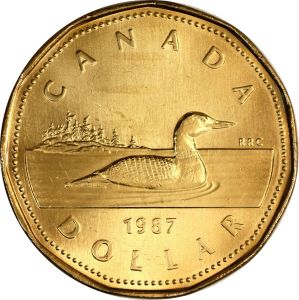 The “loonie” coin as it arrived in 1987 and now a familiar sight in pockets and change jars across the country. Note the artist’s initials “RRC” on the horizon.

How the original one dollar coin was supposed to look.

The original Voyageur Dollar Dies are still missing to this day, whether they were sold on the coin collector black market, thrown into the Ottawa River or still hidden in someone’s basement here in Ottawa has yet to be determined. (if any readers know anything, please contact me, as an anonymous source of course!)

The scene of the coin caper…are the original coin dies still in Ottawa? Bottom of the river? Your attic? (Image: Google Streetview)

Our loonie is a coin made from hasty necessity, a product of a government mishap, which propelled a rejected artist’s work to iconic status. His work has now made it into the Great Canadian lexicon, vending machines, arcades and laundromats across the country. Carmichael, who died in 2016, lives on through his initials, RRC, which are visible directly under the loon’s beak, between the ripples on the surface of the water.

Currently our loonie coin is no longer a bronze plated nickel coin but now made out of brass plated steel. This means that it is not being accepted in some older vending machines, but The Mint states that it produces an electromagnetic signature that is harder to counterfeit and by using steel instead of nickel it provides some cost savings….wait, isn’t that how we got into this whole situation in the first place?

The winter solstice usually falls on December 21st of any given year, it is a day with the shortest period of daylight and the longest night of the year in the Northern Hemisphere. The Sun is at its lowest elevation in the sky and since ancient times the winter solstice has been seen as a significant event for many cultures. Celebrated with festivals and rituals, it marked the symbolic death and rebirth of the Sun. The seasonal significance of the winter solstice is in the reversal of the gradual lengthening of nights and shortening of days. Cultures built monuments to recognize this special celestial day, such as at Stonehenge and within the pyramids of the Maya. The term ‘solstice’ derives from the Latin word ‘solstitium’, meaning ‘Sun standing still’. On this day the Sun seems to stand still before daylight lengthens again.

In recognition of the Winter Solstice tomorrow I’d like to share with you certain aspects of Canada’s Parliament Buildings that I discovered that seem to have been designed to honour this event. In 1859, The Legislative Assembly in Ottawa voted for the construction of a House of Parliament and the winning bid was made by Thomas Fuller.  The cornerstone was laid under the rituals of the Order of Freemasonry by the future King, Albert Edward, who later became Grand Master of the Convent General of the Knights Templar.

The cornerstone of the Parliament Buildings being laid under Freemason ceremony on Sept. 1 1860 by Fuller and the Prince Of Wales.

It is my belief that certain solstice secrets were built into the Parliament Buildings and surrounding area that can be seen by studying certain aspects on the Solstices using the app “Sun Surveyor” that maps out the position of the sun on specific days.

Parliament is in alignment with the sunset axis on Solstice day. The overall layout of the Parliament Buildings is aligned east-west along the axis of the setting sun on the Winter Solstice.

Second, the downtown core of Ottawa is laid out in alignment with the Winter Solstice. Wellington, Sparks & east-west streets all align with the setting sun on Winter Solstice. You can stand & watch the sunset down each street. This is why the sun is in your eyes driving west.

Third, & most interesting of all, is that the Library Of Parliament which was designed to resemble a Templar church, has a statue of the Queen at its centre. The Queen faces the entrance doorway where at noon, on the Winter Solstice, she watches the sun exactly above it. Note the special “runway” from the statue on the floor and also the bizarre geometric patterns built into the wood floor. 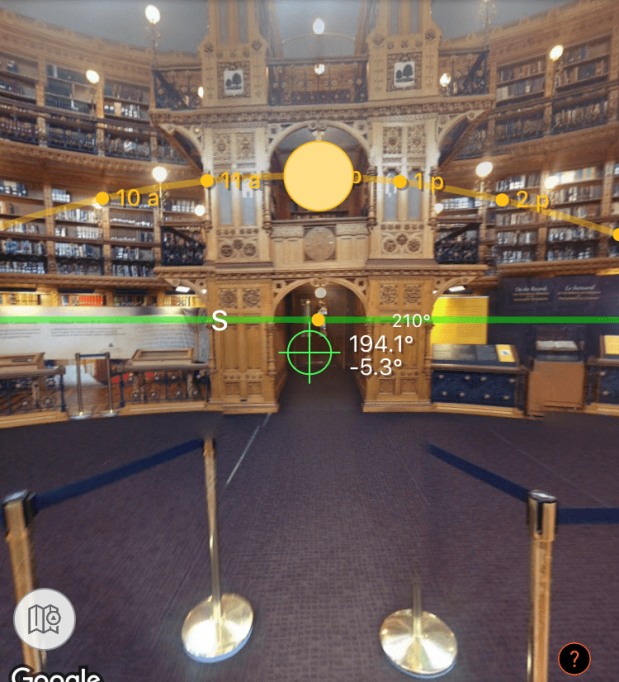 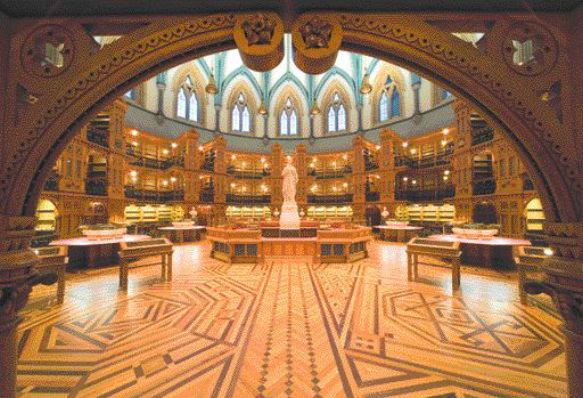 The statue of Queen Victoria as she gazes down the wooden runway awards the noon hour sun on the Winter Solstice. Note other curious geometric patterns on the floor.

And finally, the statue of Colonel By at Major’s Hill Park has been positioned so if you are there on the Winter Solstice you will see that he watches setting sun through the Peace Tower, & finally the Library Of Parliament. There is even an axis line built into the pad. 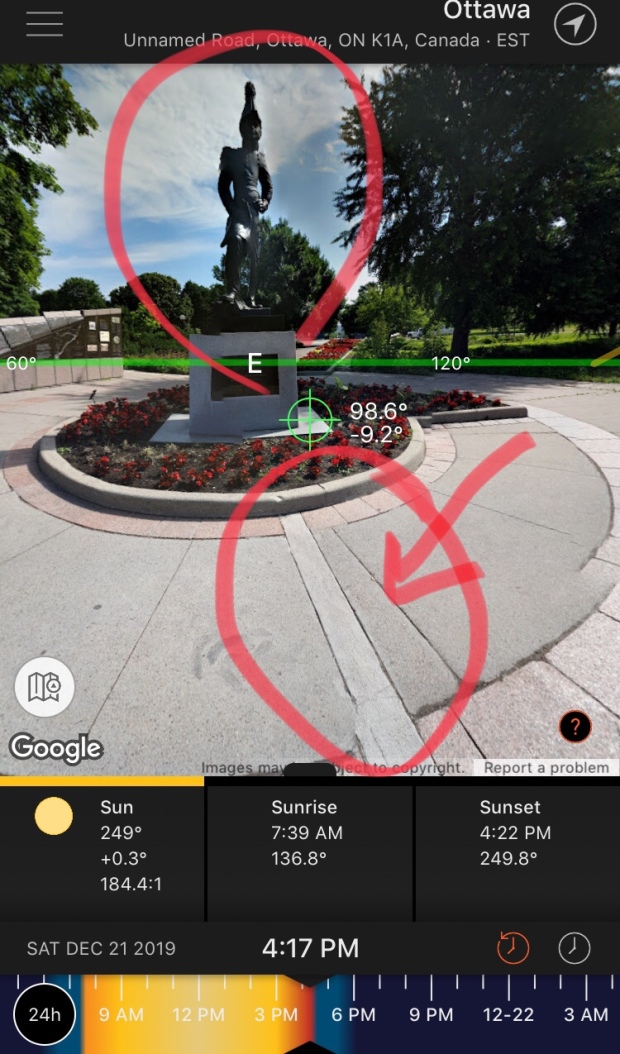 Call it coincidence, or call it a very specific and concerted esoteric effort to honour the Solstice event through the structures of the Parliament Buildings and the surrounding area.