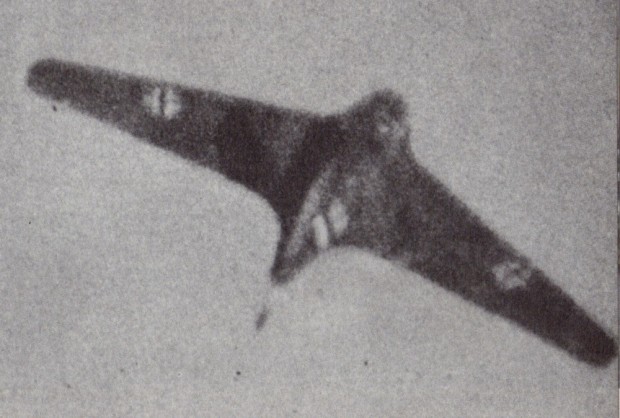 In flight WW2 gun camera photo of a ME163 Komet

During the last days of World War II, the German Luftwaffe was getting desperate in designing new aircraft that would stop the increasingly effective Allied air attacks. The Luftwaffe believed developing advanced new technologies in aviation would help them win the war. One of their more radical last ditch effort designs was the Messerschmitt Me163 Komet. Designed by Alexander Lippisch, this strange interceptor was a rocket-powered fighter aircraft. Being the only rocket-powered fighter aircraft ever to have been operational, the design was revolutionary, and the Me 163 was capable of performance unrivaled at the time. Using a two part highly flammable liquid rocket fuel as propellant, the Komet reached speeds of almost 1000km/h and was armed with two 30mm cannons to bring down attacking Allied aircraft. The Komet proved too little, too late and the war soon ended with 300 Komets being produced. Most were captured by Allied forces and due to the advanced technology of the design, were sent back to North America for further testing, studying and analysis.

Schematic drawing of the Me163 Komet

Three of these advanced rocket planes made their way back to Canada after the war, and through various sources, it looks to me that one ended up 30 minutes away from Ottawa in Arnprior, On…its final fate unknown. Of the three captured Komets in Canada, one (serial 191659) is currently on display at the National Aviation Museum here in Ottawa.

The Komet currently on display at the Canadian Aviation and Space Museum. Serial #191659

A second one, serial #191095 was as a gate guardian at RCAF Station St Jean, Québec, until taken over by the Canadian War Museum where it was restored and later given as a gift to the USAF Museum in Dayton, Ohio where it resides today. 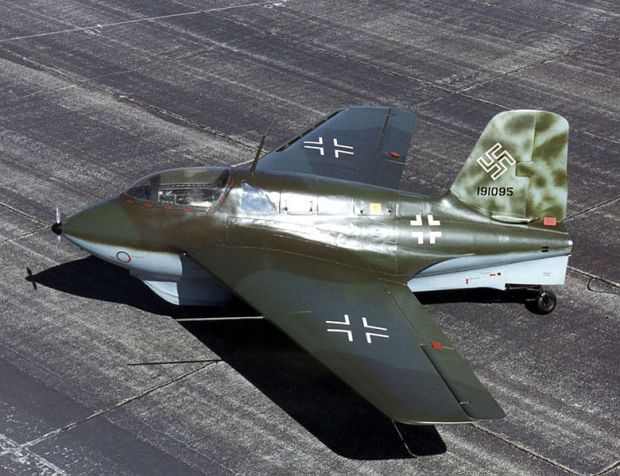 The third captured Komet, serial #191452 apparently ended up in Arnprior. After the war, it was brought over from Germany where it was put on a boat bound for Montreal. From there it somehow ended up at RCAF Station Arnprior where it was tossed in a pile of old aircraft stored there. Here is a photo of it from 1957 as it appeared in the Arnprior scrap heap:

The third Komet, sitting in a scrap pile in Arnprior…fate unknown. Serial#191452

In 1946 the Arnprior airport became the National Research Council (NRC) Flight Research station. The Komet was most likely brought here for study and research by the NRC. In 1951 the facility was re-named the “National Aeronautical Establishment” providing support to the NRC and secret experiments for the Defence Research Board. It is probable the advanced rocket propulsion system of the Komet was being studied here during this time and afterwards, scrapped into the pile of parts we see in the above photo.

Aerial view of present day RCAF Arnprior air base. It is currently a public airport.

What happened to it after 1957 is a mystery. Was it sold to a local scrap metal dealer, taken to a salvage yard? No one seems to know the final fate of this highly advanced rocket plane..maybe it still exists somewhere in Arnprior, waiting to be discovered.

The only remaining WW2 RCAF buildings at Arnprior airport. They have since been demolished after this photo was taken.

There is a nearby scrap yard that may provide some clues to this mystery, but I will wait until the spring when the snow melts and the sun is warm before investigating further. Until then, any further info on this interesting piece of aviation history is welcomed.