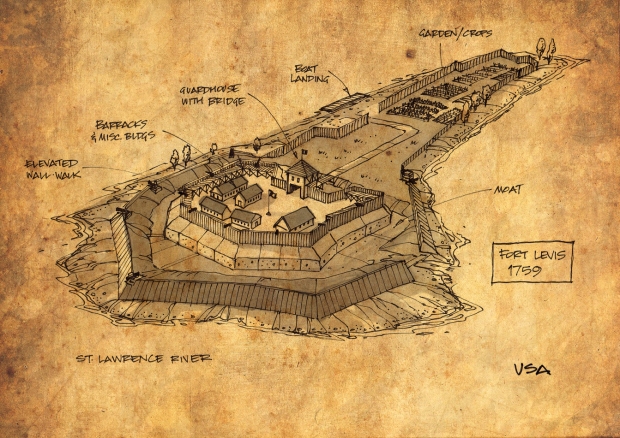 A concept sketch of how the fort would have looked on Isle Royale in 1759.

Flooded by the St. Lawrence Seaway project, whatever remains of the 1759 island fort are currently underwater.

A 250 year old island stronghold underwater near Prescott, On

Driving south of Ottawa on the 416 for about an hour you can cross the border into the United States over a bridge which spans the St. Lawrence River near Prescott. Like thousands of others travelers, I’ve crossed the suspension bridge at a great height over the water and islands below, gazing in wonder at the mighty river that connects the Atlantic Ocean to the Great Lakes. But it is only now that I am discovering there is a submerged fortress island of great historical significance in the waters below.

When you think about old forts in the area, you usually think of Fort Henry in Kingston, but there is a much older fort, and its remnants lie under the waves just an hour away. While doing some research on another topic I came across an excerpt from a 1876 book on forts. The old book mentions  ruins of a fort called “Fort Levis” near Prescott.

Excerpt from 1876 book mentioning ruins of a Fort near Prescott.

Upon further investigation it turns out this island fortress was the final stronghold for French forces during the Seven Years War with Britain in 1760 and was flooded out in 1959 along with countless other islands during the construction of the St. Lawrence Seaway. Today only a small portion of the island is visible above water. Most of it, including the fort area lies underwater. Let’s rewind time and take a closer look…

Flooded out in the 1950s, Chimney island was once Isle Royale.

Called “Isle Royale” by the French in 1759, a decision was made to build a fortification on the 800 foot island in the middle of the St. Lawrence to repel any invading British ships making their way up the river from Kingston. Abandoning a previous fort near Ogdensburg the French built the island fortress as a last ditch effort against the advancing British ships trying to take Montreal. Armed with cannons, a moat, ramparts, palisades and other fortress features, it was called FORT LEVIS. The island army even grew a their own vegetables in a garden on the east end of the island. 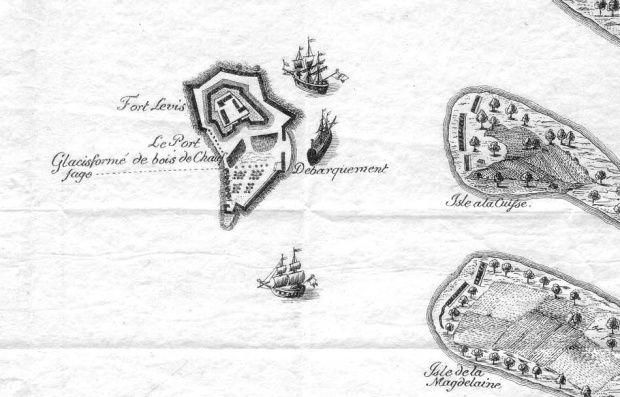 A French map from 1759 indicates Isle Royale and Fort Levis built upon it.

Originally to be built of stone, plans changed due to time restraints and Fort Levis was built out of wood and measured about 350 square with bastions in each of the corners. A loading dock area for supplies was on the north shore facing the Canadian side of the river. French Commander Pierre Pouchot took command of the island fort and prepared to defend what was soon to be a short lived fortress.

Sketch showing the island as it appeared in 1759 with the defensive features of Fort Levis.

It didn’t take the British long to begin their advance up the St. Lawrence River in their gunboats towards capturing Montreal so the fort was put into immediate action. French lookouts near Alexandria Bay saw two approaching British gunships, the Mohawk and Onondaga, and raced back to the fort and braced for impending attack. 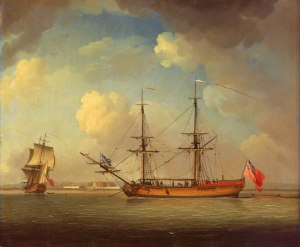 British gunships, Mohawk and Onondaga advanced up the St. Lawrence through the 1000 Islands towards Fort Levis.

The two British ships got lost in the maze of the Thousands Islands for a week, giving the French time to prepare for battle. The British ships managed to capture a French gunboat along the way, hoisting a British flag and re-naming it the Williamson and adding it to its fleet of now three ships to take on the newly constructed Fort Levis ahead. Surrounding the island fortress were other islands, now held by the British with cannons stationed and aimed at the French fort. Under the command of Major-General Amherst, the three British ships arrived at Fort Levis on August 19 1760 and a fierce Battle Of The Thousand Islands began.

The island fortress threw everything it had against the looming British trio of ships, blasting the newly captured Williamson 48 times with cannon fire. Amherst called a ceasefire and retreated for the night. At dawn the fort once again rained cannon fire upon the British ships while also repelling invading troops trying to storm the shores of the island. During the skirmish the fort managed to sink both the Williamson and the Onondaga to the bottom of the St. Lawrence. The island fort did not let up its defensive attack and Commander Pouchot pummeled the remaining ship, the Mohawk, with cannon fire, sinking it also. Three ships sunk. The British had nothing left to attack the fort with except their island cannons surrounding Fort Levis.

Surprised at the unbelievable tenacity of the island fort to protect itself from all angles, Amherst gave the go-ahead to switch the cannons to “hotshot”, balls of fire that would set ablaze whatever they impacted. British hotshot rained down on Fort Levis, and with the fort on fire and having exhausted all their ammo, Pouchot finally surrendered the besieged island to the British. Originally armed with 300 soldiers, the French lost 275 men during the battle. The British lost 26 men. The fierce week long island battle was to be a decisive and final fight between French & British troops on the continent. The island fort was rebuilt and renamed Fort William Augustus under the British, with Amherst carrying on to join other British troops that surrounded Montreal. On September 6, 1760 Montréal was surrendered by New France’s governor, the Marquis de Vaudreuil which brought an end to the French empire in Canada. The island fort was the last stronghold for the French and its loss to the British signaled the end to the war.

a 1954 aerial photo shows the outline of the fort wall ruins. 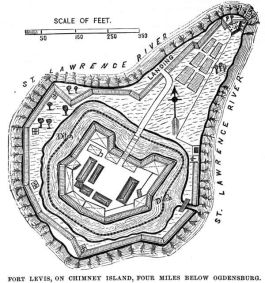 It is unclear what happened to the fort between 1760 and 1950 when the St. Lawrence Seaway began construction.  A study of aerial images produced in 1954 reveals the outline of the fort ruins were still visible on the island before it was submerged. Whatever remained of the original fort slowly slipped underwater in 1959 when flood waters raised levels for the new seaway.

Comparison of the island fortress then and now.

All that remains today of this important and decisive piece of Canadian history is a small patch of rock and grass now called Chimney Island which can be seen just east of the Prescott International Bridge. Whatever remnants of this 250 year old island fortress and its fierce past now rests quietly under the waves of the St. Lawrence River.