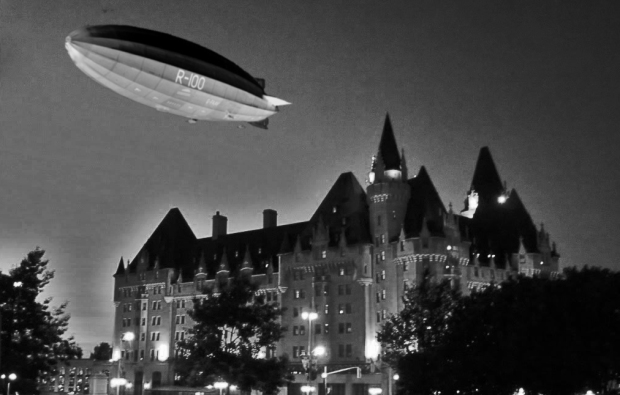 How the R100 may have looked as it hovered over the Chateau Laurier on the night of August 10 1930.

One summer’s eve in 1930, the warm night air became filled with the roar of engines as a colossal object hovered over the downtown Ottawa skyline. Cars stopped in their tracks, thousands of people ran from their homes, restaurants and movie theatres, staring skywards at a massive shape that was slowly filling the night sky…it was the Night Of The Zeppelin.

The age of the mighty airship arrived in Canada in the summer of 1930 when the newly constructed R100 completed its maiden voyage across the Atlantic Ocean from Britain to Montreal. Built as part of the Imperial Airship scheme to have a fleet of giant airships that could reach all corners of the British Empire around the globe, the 720 foot R100 was powered by six V12 Rolls Royce Condor engines housed in three gondolas. Each gondola contained two engines, one for pushing and one for pulling propulsion to give the R100 a maximum speed of 80mph or 130kmh. 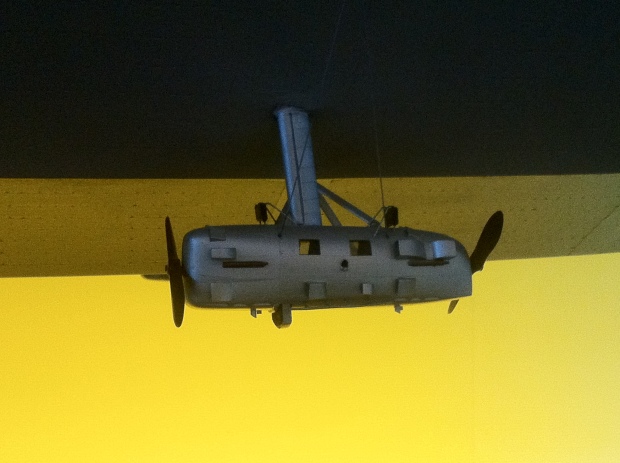 Constructed of a lightweight aluminum rigid airframe and filled with hydrogen gasbags, the outer skin of the R100 was made of an aluminum dope coated linen. Completed in 1929, the R100 made a number of test flights before it was decided Her Majesty’s Airship would prove her airworthiness to the world by completing a trans-Atlantic journey to Canada in 1930. Two years earlier the Germans had successfully crossed the Atlantic to the United States in their Graf Zeppelin, and now it was Britain’s turn.

With a crew of 37 and a passenger capacity of 100 guests, accommodation was arranged on three decks inside the ship. The first decks were crew quarters, the second deck housed the dining room, which doubled as the passenger lounge, plus the kitchen, 18 four-berth passenger cabins and a gallery on either side for passengers to enjoy the view through the windows built into the skin. The third deck consisted of a gallery running around the dining-room and 14 two-berth cabins. 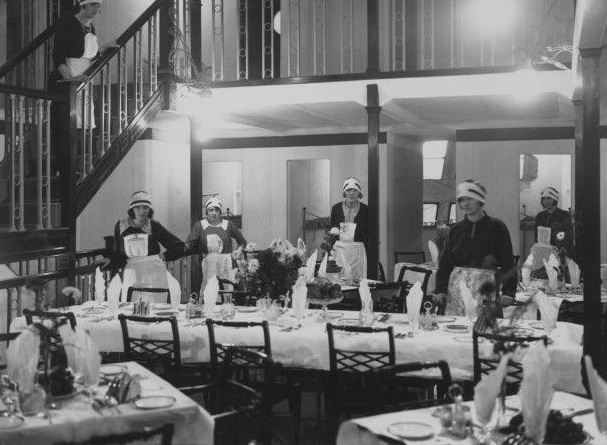 The R100 dining room and staff ready to make your Zeppelin voyage an enjoyable one. 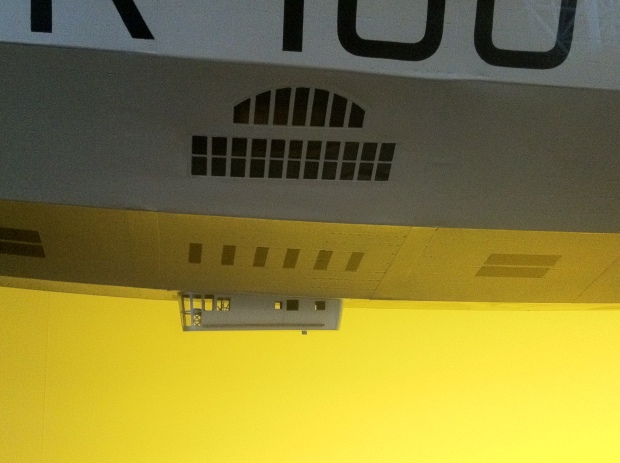 After leaving England on July 29 1930, the R100 successfully crossed the Atlantic and arrived in Montreal in just 78 hours at an average speed of 68kmh. A special mooring 200 foot Art Deco mast was built specifically for the giant airship’s arrival, the only one of its kind in the world outside of England. Docking at the new mooring mast at an airfield in St. Hubert, over 100,000 people a day rushed to view the future in Zeppelin transportation.

The specially built mooring mast tower for the R100 at St. Hubert airfield just outside Montreal. 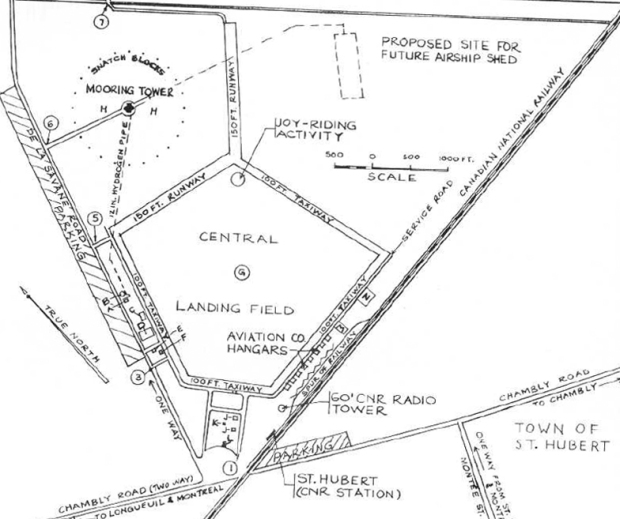 Original map showing the St. Hubert airfield with the location of the airship mooring mast and hopeful future hanger. 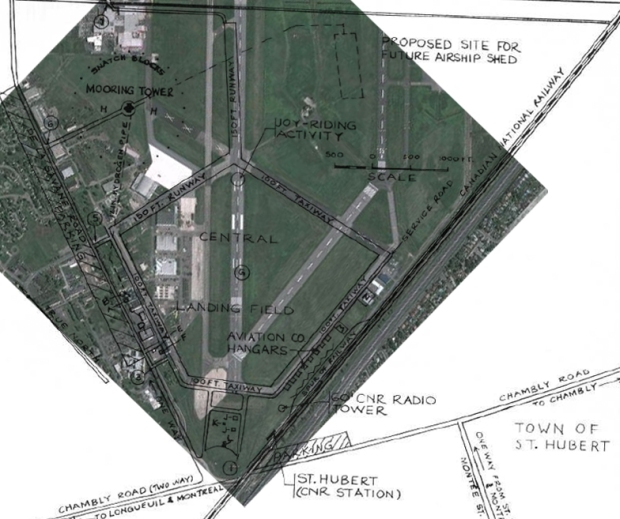 The same map overlaid on a current map of the St. Hubert airport. Note the tower has since been demolished.

Location as it looks today of where the airship mooring mast would have been located.

Long since destroyed, a composite image showing the R100 and the mooring tower ghosted over the same view today.

The majestic airship, three times the size of a modern 747 jet, soon left Montreal with VIPs from Ottawa and headed out for a 24 hour tour of Ontario. Departing Montreal the R100 sailed west and under a bright moon, hovering quietly over the Nation’s Capital, arriving at approximately 9:50pm. The entire city was swept up in “Zeppelin-mania”, with thousands rushing out of their homes, restaurants, and even abandoning cars in the middle of the streets to catch a glimpse of Her Majesty’s massive airship now over Ottawa. With the Peace Tower carillon playing “O Canada” and powerful searchlights targeting the R100 in the night sky, the R100 passed low over Parliament, The Chateau Laurier, and then sailed on towards Carleton Place and Smiths Falls. The age of the airship had arrived. (Sadly, no photos are readily available of this momentous visit to the Nation’s Capital due to the photographic technology of the time that limited proper night-time photography.) 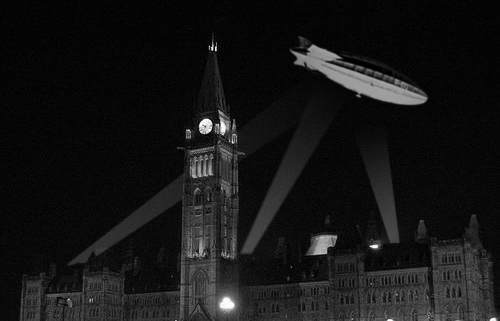 Rendition of how the R100 may have looked hovering over the Parliament Buildings with searchlights on it as it passed over Ottawa August 10 1930.

Continuing its silent passage through the night skies, the R100 reached Toronto at 5am the next day, passing over St. Catherine’s and even Niagara Falls. It made a brief appearance over the Thousand Islands and into New York State, before making the necessary preparations for a return to England.

Guests aboard the R100 would enjoy the finest in airship travel, as seen here in the lounge. 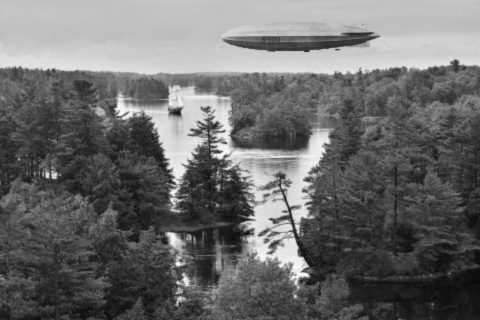 Rendition of how the R100 may have looked crossing over the Thousand Islands.

After a successful return flight across the Atlantic back to its base in Cardington, the British Air Ministry was confident their airships were ready to travel the world. The R100 had a sister ship the R101, that was outfitted with heavier, but safer diesel burning engines geared for tropical travel. Orders were given to send the R101 to India, to show the world they were the new Zeppelin masters of the world and that the Imperial Fleet was capable of reaching any destination they choose. Unfortunately, the hasty and over confident orders resulted in disaster. Just weeks after the R100 arrived safely back in England, the R101 left for India outfitted with its heavier diesel engines, but soon faced a violent storm over northern France and for reasons unknown, hit the ground, igniting its volatile hydrogen gas, exploding into a ball of flames killing 48 of the 54 people aboard. Humiliated and now unsure of the great Imperial Airship Fleet, the British Air Ministry ordered the remaining R100 grounded. After a year of contemplation it was decided the age of the airship was over for the British Empire, and in 1931, the once majestic symbol of a new era in aeronautics was pulled from her hanger in Cardington into a field where it was unceremoniously destroyed, flattened by a steam roller into a pile of aluminum that was later sold for the scrap metal value of around $1,200. 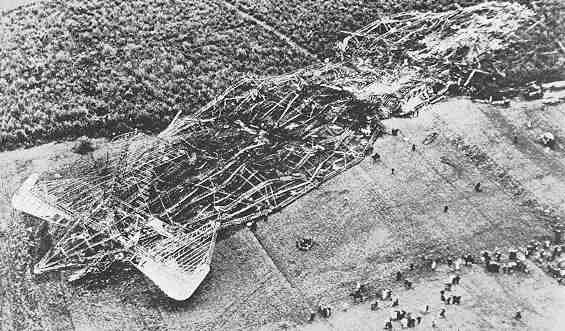 The R101 destroyed after its fiery crash in France just weeks after the R100’s successful voyage to Canada.

Hoping other countries like Germany and the United States would bring their continuing airship programs to Montreal, the St. Hubert airfield maintained their Art Deco mooring mast, expecting one day a visiting airship would once again return. No other airship ever returned to Canadian skies, and now just a sad reminder of a once romantic period in aeronautics, the airport demolished the 200 foot tower in 1938, bringing an end to the age of the airship in Canada. 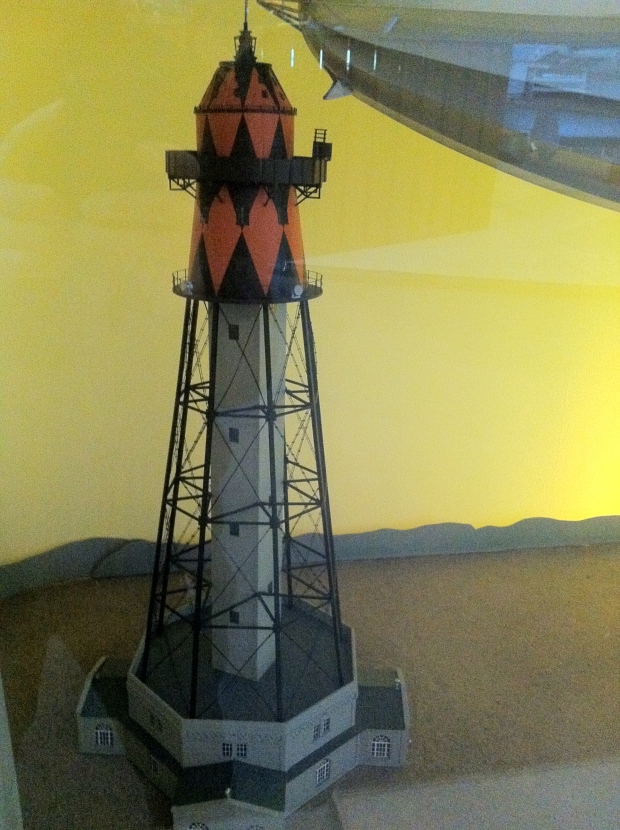 All that remains of the R100 today are few items on display in the Aviation & Space Museum in Ottawa, including the original control steering wheel, a bed frame, and a fragment of its outer linen covering. Some other components and the original airship hangers remain in Cardington, England. 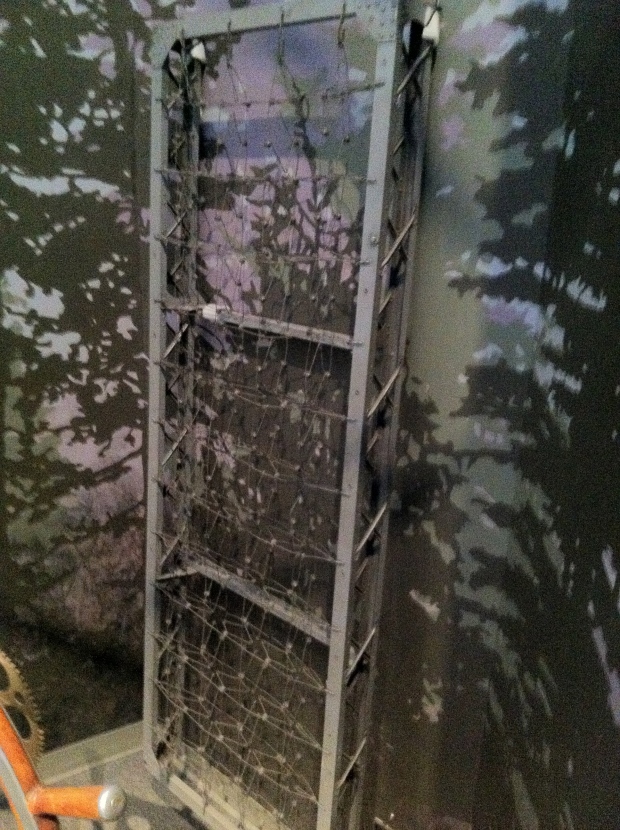 A lightweight aluminium bed frame from the R100 airship on display at the Aviation Museum. 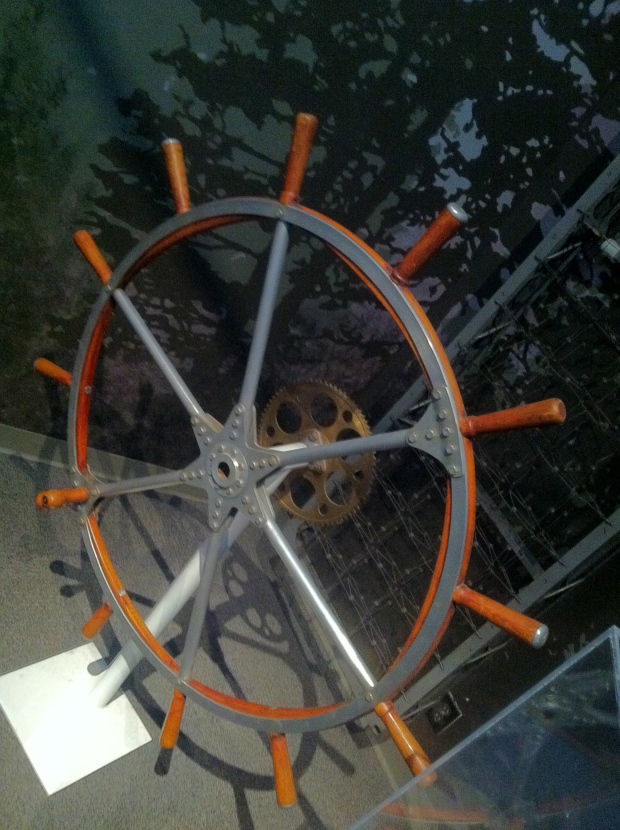 One of the original R100 control steering wheels on display at the Aviation Museum. 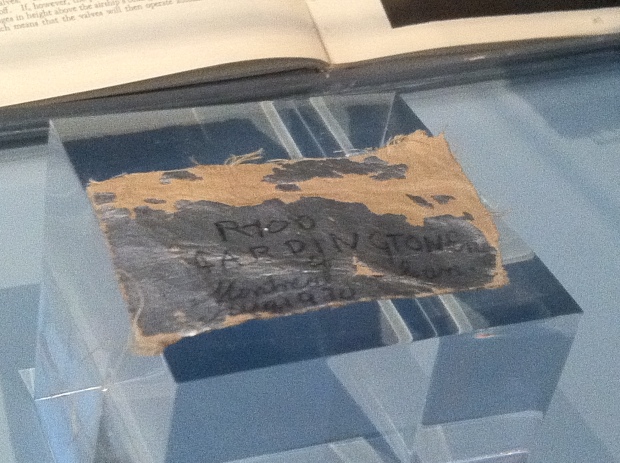 Fragment of linen covering from the R100 at the Aviation Museum.