A Smiths Falls landmark for over a hundred years, the giant iron bridge on the outskirts of town that once spanned across the Rideau Canal sits like a massive sentinel, forever poised at a 45 degree angle.  Built by the Canadian Northern Railway over the course of the year 1912-13, the bridge was part of the Toronto to Ottawa connection of the CNR. Designed in Chicago and built by the Dominion Bridge Company, this massive iron bridge showcased a new style of bridge engineering fairly new to North America called the bascule bridge. 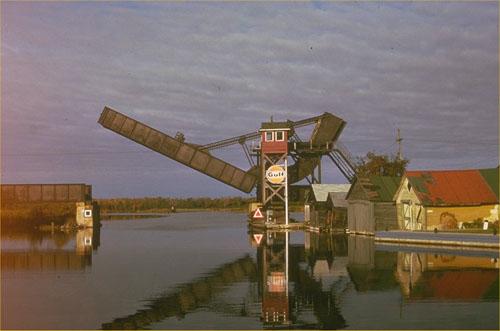 Called the Schrezer Rolling Lift Bascule bridge, after the Chicago company who designed it, these bridges were designed for areas where a high rail bridge or swing bridge could not be implemented. “Bascule” is French for “see-saw”, the principle used in its design and operation. Using a massive concrete counterweight perfectly balanced, the bridge lifted up with relative ease by either manual or electric operation. The bridge first began operating by manual fashion, but in 1914 a DC electric motor was installed to raise the bridge, but in 1915, the town of Smiths Falls switched to AC electric current, making the bridge motor useless. It went back to being manually operated until 1978. The CNR line later closed, and the bridge was put in a permanent “up position” which is how it remains to this day.

The bridge in its fixed upright state. (photo Wikipedia) 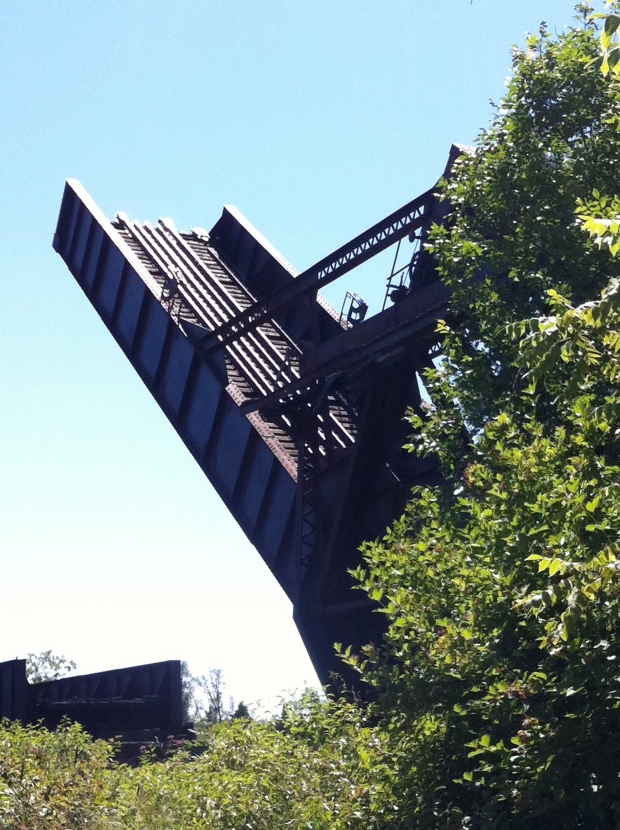 The Iron Giant in Smiths Falls.

The bridge is the oldest surviving structure of its type in Canada and is in the care of the City Of Smiths Falls who claimed ownership of the bridge in the mid-1980s. It can easily be visited by foot and every year hundreds of boats pass beneath its  ironwork as they travel under this looming iron giant on the Rideau Canal system. It was designated a National Historic Site in 1983.