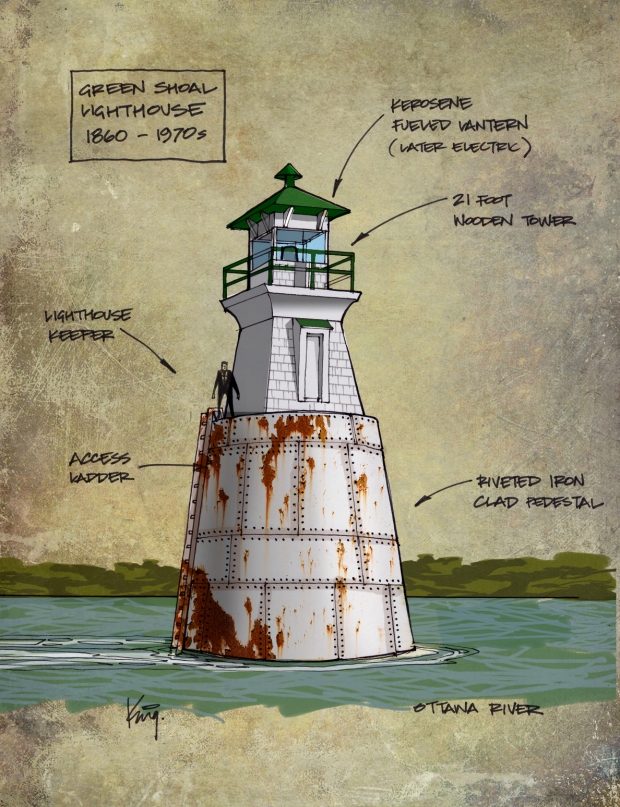 A concept sketch of how the lighthouse in the Ottawa River may have looked based on a photo taken by Lou Bouchard and aerial images from the 1960s.

The east-Ottawa community of Beacon Hill has a history of celebrity upbringing since the early 1970s when the suburban neighbourhood was originally developed. Tom Cruise, then known as Thomas Mapother, lived in Beacon Hill in the early 1970s along with another Hollywood Tom, the home-grown comedian Tom Green. Bryan Adams and former Saturday Night Live cast member and Weekend Update anchor Norm MacDonald also spent their youth in this east end suburb located a few kilometers downstream from the Nation’s Capital.

Having attracted a number of celebrities, the area also has a history of keeping people away from its shores with the construction of a warning beacon, the very beacon that gave the community its name.

This old 1880 map clearly shows a lighthouse in between the Duck Islands on the Ottawa River. (Gloucester Township Map 1880)

A few hundred metres north of the shore near Beacon Hill lie the remains of one of the Ottawa River’s lost lighthouses. Constructed in 1860 between the gaps of the the Ducks Islands near the provincial border, the lighthouse structure was built as a navigational aid to warn sailors of the dangerous reef of rocks known as “Green Shoal”. Navigating ships on the Ottawa River was a relatively new adventure in the mid-19th century, but with the construction of the Rideau Canal in 1832 and the Carillon Canal in 1833, the Ottawa River became a busy shipping and tourist route between Ottawa, Lake Ontario and Montreal before the advent of area rail travel. The waterway was busy with steamships plying the waves between cities, but a number of shoals and islands created hazards for the vessels and required the need for warning lights to mark their location. The government at the time gave the order for the construction of approximately 30 lighthouses on the Ottawa River to assist in the safe passage of growing river traffic. Pre-Confederation Canadian lighthouses were usually built of stone or brick, but with the need to build so many new structures in time, the newly formed Department of Marine and Fisheries required cheaper and faster lighthouse construction techniques.

A 1904 map shows lighthouses in red, a number of which were on the Ottawa River. The Beacon Hill lighthouse, on Green Shoal, is the furthest red dot on the left. (bytown.net -Department of the Interior, Atlas of Canada 1904)

Built as four sided tapering wooden clapboard towers, these structures had the advantage of being cheap to build, and in some cases could be relocated if the site needed attention. The water hazard known as Green Shoal would seen see the construction of such a beacon structure in 1860 on a conical pedestal sheathed in iron boiler plates, riveted together like some kind of Jules Verne rocket to withstand the strong river current and sheets of crushing ice carried downstream. Atop this iron clad pedestal was placed a 4 sided white wooden pyramidal tower 21 feet in height. Using a standard design used for many of the Ottawa River lighthouses, the structure housed a fixed light that was initially fueled by Kerosene, a fuel invented by the Canadian geologist Abraham Gesner in 1846. The Green Shoal light was visible to passing ships from a distance of nine miles and eventually was rebuilt in 1900 when it was most likely converted to using an electric lamp.

In 1862 the Sessional Papers of the Province of Canada reveal a house was requested to be built for the keeper of the lighthouse, yet its location or fate is unknown. In 1891 the lighthouse keeper by the name of A. Laberge earned an annual salary of $250 for his duties maintaining the light at Green Shoal.

A close-up of a 1965 aerial image shows that the beacon was still in place on its pedestal on the Ottawa River. (geoOttawa)

The beacon remained in operation for more than a hundred years, being dismantled and replaced by an automated light marker sometime in the 1970s. It was at this time that a new suburb was being developed nearby, and from atop the hill on what is now Naskapi Drive, the neighbourhood got its name from the old beacon that was visible on the river below. 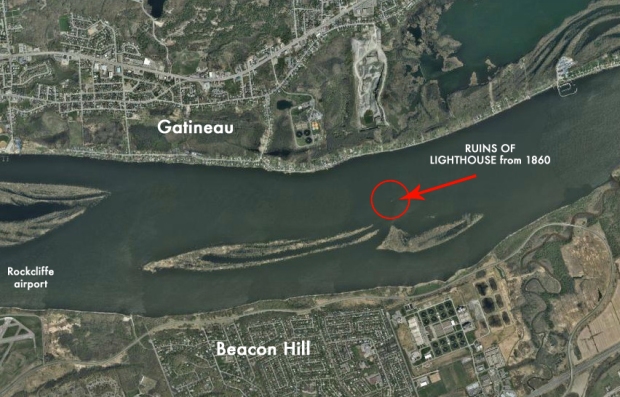 The location of the ruins of the lost lighthouse that gave Beacon Hill its name. (Google Maps)

Today Beacon Hill residents and those on the Quebec side of the river can catch a glimpse of the iron-clad lighthouse ruins sitting in the Ottawa River. Bashed by years of crushing river ice, the rusty remnants now list to one side, a forgotten sentinel literally frozen in time during the winter months. 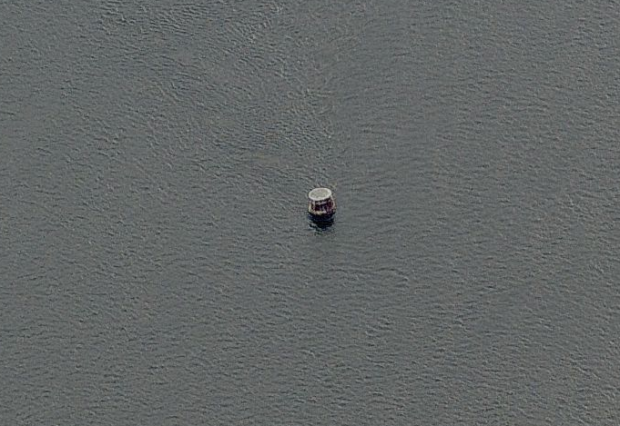 All that remains of the lighthouse are the iron-clad rusty remnants of the beacon’s pedestal. (Bing Maps)

The rusting beacon ruins, literally frozen in time, encased in ice on the Ottawa River. The neighbourhood of Beacon Hill, which got its name from this very lighthouse, is in the background.

Beacon Hill, a neighbourhood that could also be called “Celebrity Hill”, continues to carry the name of the structure that once warned sailors to keep away. What’s left of this namesake slowly slips under the waves from where it emerged.

1862 Sessional Papers Of The Province Of Canada