A 1968 postcard shows Ottawa’s “bunnies” as they appeared at The Riverside Hotel in Vanier.

The back of the postcard gives an indication of what the Riverside Hotel offered its guests.

During the late 1950’s and 1960’s the “Playboy” phenomenon was sweeping the nation as Hugh Hefner’s magazine Playboy took society by storm and created a new sexual revolution. The magazine’s trademark “Playboy Bunnies” graced the pages of the gentleman’s magazine, and soon Playboy clubs were opening across North America, staffed by waitresses dressed up as the “bunnies” as portrayed in Hefner’s publication. 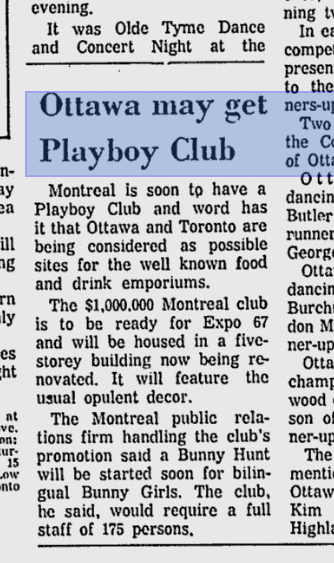 Ottawa was slated to get its own “Playboy Club” as shown in this 1967 Ottawa Citizen article. It never happened.

With the first Playboy Club opening in 1960, Canada only saw one Playboy Club open on its soil, and that was in Montreal which opened in 1967 for Expo67. Rumours in newspapers hinted Ottawa might also get its own Playboy Club, but this was never realized so Ottawa created it’s own version of “bunnies”…at a place called The Rib.

A 1962 Ottawa Citizen ad illustrates the tantalizing appeal of The Rib.

Located within the Riverside Hotel on what is now River Road N. in Vanier, the listed address in the 1960s was 399 Riverside Drive. The hotel boasted a “Businessman’s Buffet” at the restaurant called “The Rib” and it was also reported to be Ottawa’s very first and “best” steakhouse.

A vintage postcard of The Rib at The Riverside Hotel. Note the “gentlemen” conducting important business meetings over cocktails and steak.

Postcards and newspaper ads touted The Rib as the place to eat and be entertained, served cocktails and steaks by “45 lovely bunnies” similar to the Playboy Club in Montreal.  A discotheque and live music venue also graced the Riverside Hotel and was a popular attraction for those wishing to have, er… business “meetings”.

Another 1960s Ottawa Citizen ad for the Riverside Hotel and their Businessmen’s Buffet and entertainment options.

Straight out of the Mad Men era and what looks like a set piece from the show, The Rib’s atmosphere was that of gentleman’s entertainment and a source for the associated business trip expense account receipt. A special “Businessman’s Lunch Buffet” was offered at The Rib and it continued operation until the hotel closed. The bunnies left the building and it was subsequently demolished in 2006 to make way for the EdgeWood Care Centre. 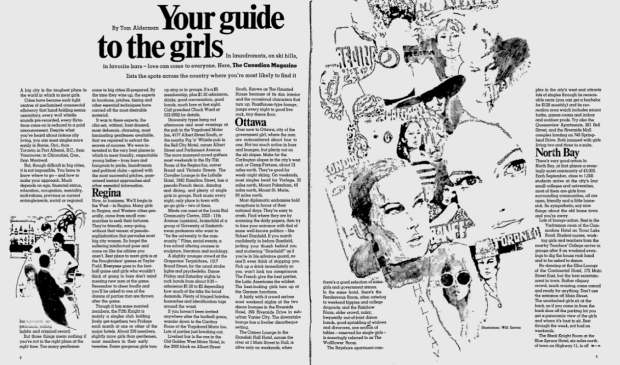 A 1969 Montreal Gazette article explains how The Riverside Hotel was the place to meet girls in its “Guide To The Girls”.

Description of how The Riverside Hotel was a happening spot to meet the ladies.

The Riverside Hotel was a relic of different era and of a different mindset when it came to entertainment, all of which disappeared when it was removed from the Ottawa landscape.

A 1965 aerial image of The Riverside Hotel. (geoOttawa image) 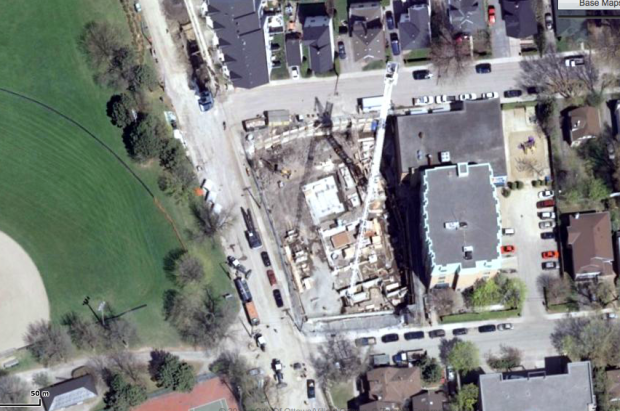 The hotel and its outdated image were demolished in 2006 to make room for the Edgewood Care Centre.

The site of the former Riverside Hotel as it looks today. (Google streetview)