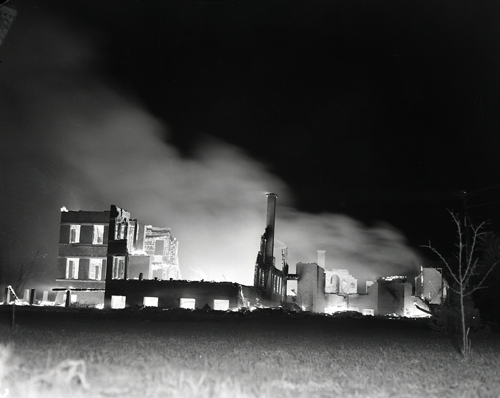 60 years ago on May15 1956 a fighter jet screamed into an Orleans convent burning alive 11 nuns and a priest. (photo: City of Ottawa Archives)

Sixty years ago to this day the flames of hell consumed the souls of 11 nuns and two airmen when a fighter jet screamed down from the heavens and exploded into a remote Ottawa convent in the fields of Orleans. On this 60th Anniversary of what is called The Convent Crash, let’s take a closer look at the events and aftermath of this gruesome chapter in Ottawa’s history.

Here is an Ottawa Uplands air base CF-100 being loaded with fuel tanks, the same jet that would have slammed into the convent

On the evening of May 15, 1956 two CF-100s were scrambled from their base at RCAF Station, 445 Squadron Uplands to intercept an Unidentified Flying Object heading towards Montréal. The time was 10:37pm and the Canadian built CF-100 Canucks quickly reached their target which turned out to be a RCAF North Star flying from Resolute Bay to Dorval Airport. The two planes then decided to ascend to to 33,000 feet to practice interception techniques and burn off excess fuel before returning to base.

Ottawa’s 445 Squadron markings on the CF-100 that slammed into the convent.

One of the planes then landed but the other jet reported they were going to continue flying, burning off their excess fuel. This was to be the last communication received from the aircraft.

CF-100s from Ottawa’s Uplands base flying in formation.

The plane was piloted by F/O William J. Schmidt (age 25) and F/O Kenneth D. Thomas (age 20), two young men who would soon scream downwards and take eleven nuns and a covent into a fireball from hell. No one is quite sure what happened at 33,000 feet that night sixty years ago, but one explanation says that the oxygen masks of the two crewmen malfunctioned and they lost consciousness, sending the jet into a death dive. (Here is a short video of a real CF-100 fighter jet I filmed at RMC Kingston.) 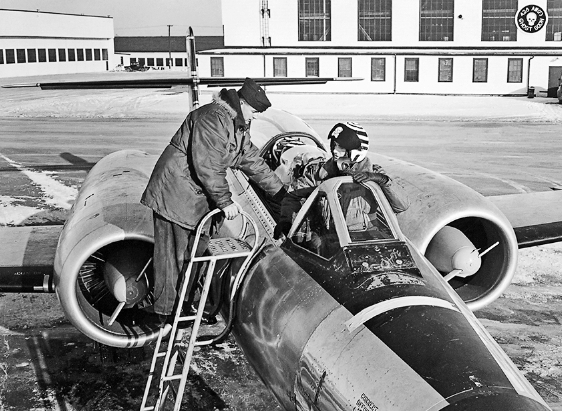 a CF-100 pilot prepares for a mission.

Below, on the outskirts of Ottawa, The Sisters of Villa St. Louis were getting ready for bed in their convent located on the shores of the Ottawa River. In the heavens above, a fighter jet was screaming down at 680mph and slammed into the remote convent, ironically one of the few buildings in the area at the time.

The convent is the the unmarked building complex near the shore of the Ottawa River.

Upon impact, the jet exploded into a ball of flames, igniting the jet fuel and weapons munitions aboard the plane, vapourizing the three storey, 70 room building, and instantly killing the airmen. What happened next was a scene from hell as burning nuns jumped from windows, while others screamed as they were trapped and frantically trying to open windows. Those unable to escape their rooms died of smoke inhalation. 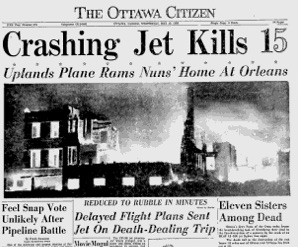 Headlines in the Ottawa Citizen report the grisly scene of the scorched earth scenario in Orleans.

Nearby neighbours rushed to help at the gruesome scene, but little could be done to save the trapped nuns inside. When the flames were finally extinguished, 25 people had made it out alive, but 11 nuns, a priest, a servant, and the jet crew perished. In what was one of the worst air disasters in Ottawa’s history, the RCAF began an investigation into the disaster but could not determine what had happened. The jet’s crew had given no indication that they were in any trouble, and there was no attempt to eject from the aircraft. The plane could have easily hit the vacant fields or the empty waters of the Ottawa River, but for some ironic reason it slammed into the nuns convent like a godforsaken curse.

The two airmen killed in the crash (Ottawa Citizen)

The RCAF cleaned up the site and today the Bruyere Centre Saint Louis sits on the scene of crash. A memorial marks the location where 15 souls lost their lives the night hell fell from the skies.