The Macintosh Apple from Dundela, On, one hour south of Ottawa, was the favourite apple of Apple employee Jef Raskin, who named his 1984 computer after the crisp apple. (wikipedia)

In 1984, Apple launched the Macintosh, the first personal computer to be sold that featured an integral graphical user interface and mouse. It was a turning point for Apple Inc. that would later develop the popular iPhone that so many of us use today. The Macintosh helped launch Apple’s success, and that name has its roots, literally in a small town south of Ottawa. Within the woods of Dundela is where the McInstosh apple was first discovered in the early 1800s that would later become Apple computer designer Jef Raskin’s favourite apple. The Macintosh would grow to be one of the world’s most recognized computers, and a legal dispute resulted in the apple name being spelled “Macintosh” instead of “McIntosh”.

Steve Jobs and the 1984 Macintosh Computer.

Back in 1811, John McIntosh, a transplanted American from New York discovered an apple sapling on his farmland about an hour south of Ottawa. While clearing the overgrown plot of land, McIntosh discovered some wild apple seedlings on his farm. He transplanted the seedlings next to his house. One of the seedlings bore particularly good fruit and his son, Allan, learned about grafting tress and began cloning apples so the McIntoshes could maintain the distinctive properties of the fruit from the original tree. 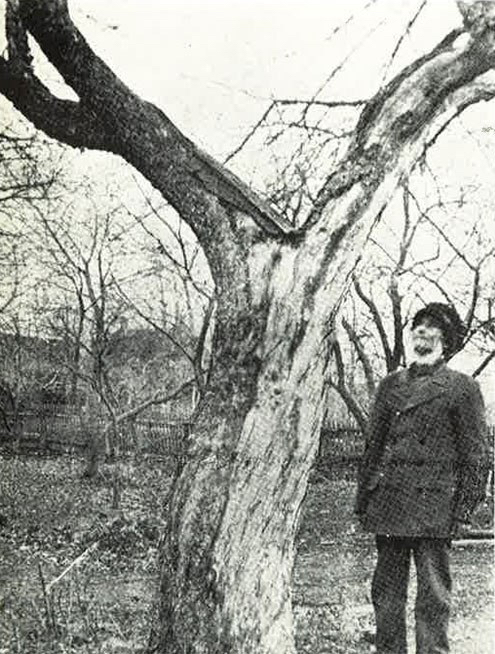 Farmer Macintosh, standing next to the original Mac tree, circa 1900.

The “McIntosh Red” entered commercial production in 1870 and the apple became widely popular after 1900. Sadly, a fire damaged the original McIntosh tree in 1894 and it last produced fruit in 1908, then died and collapsed in 1910. The original tree discovered by John McIntosh bore fruit for more than ninety years, and horticulturalists from Upper Canada Village Heritage park saved cuttings from the last known first-generation McIntosh graft before it died, and have produced clones that now grow in a fenced garden in their heritage park.

Now 207 years old, the McIntosh apple still has highly desirable taste, texture, aroma, and appearance, and is also suited for growing in this country’s cold climate. Hybrids, such as the Cortland, Empire, Lobo and Spartan, were all derived from this original tree.

It’s popularity as an apple certainly resonated with Apple Inc. employee Jef Raskin, who in the late 1970s envisioned an easy-to-use, low-cost computer for the average consumer. It would be a few years later that the “Macintosh” or “Mac” computer was introduced in January 1984 named after his favourite fruit…the Macintosh apple. It came bundled with two applications, MacWrite and MacPaint, and later MacOffice. So that old apple tree south of Ottawa is responsible for not only years of being the product of pies and school lunchboxes, but also the current iMac desktop computers and laptops, the MacBooks.

Next time you take a bite of one of those fresh McInstosh apples this fall season, remember its literal roots south of town, and the computers it spawned.