A recent drive back to my hometown along the 401 highway brought back memories of the same trip 30 years earlier with my family in our little Volkswagen Beetle. Like most family road trips in the late 1970s we’d stop in at one of the rest stops along the 401 to go to the bathroom, grab a bite to eat and fuel up the tank. Spending less than few minutes at these rest stops, I now think I took for granted what was a remarkable piece of lost architecture.

My re-collection of these rest stops was of a unique dome shape that I distinctly remember as a 10 year old kid. Of course, the ten year old me could care less about the architecture at the time, my thoughts were more focused on the green Jello in the glass display cases housed underneath this great domed 401 oasis. With fond memories of these restaurants with their vinyl clad fake wood panelled booths and smell of sizzling burgers, I hoped to re-visit one of these places, but unfortunately they have all been recently demolished and replaced with the new, modern “On Route” rest stops.

This new OnRoute rest stop in Port Hope replaces the original domed “spaceship” design that was demolished at this location. (photo: Google Streetview)

There is little record of these once grand domed rest stops, but I did manage to find some background info on what I think was an important part of our Canadian culture and a unique architectural icon.

These unusual rest stops, looking somewhat like a landed UFO, were designed by a Toronto architect by the name of Harry B. Kohl. Kohl was one of the premiere architects of the 1960s, having designed cutting edge pre-fab model homes for the National Home Show. After graduating from University of Toronto in 1947 Kohl designed a number of homes, apartment towers and eventually, the Millhaven Maximum Security Penitentiary . Kohl died in 1973, but many of his designs still live on in the Greater Toronto Area.

A 1960s postcard of a Kohl’s rest stop describes locations in Kingston, Port Hope and Woodstock.

Kohl was into the use of architectural geodesic domes, of which he incorporated into his design for the 401 rest stops that he was awarded in the early 1960s when the newly built 401 highway system was opened. Kohl believed circular shapes accommodated the circulation of people better than square shapes, and his designs, including the 401 rest stops, reflect this theory. 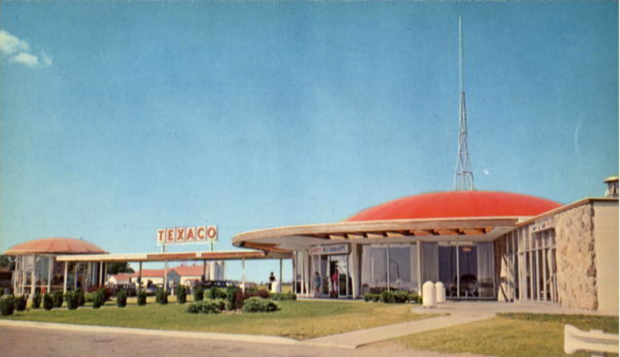 A 1960’s postcard of Kohl’s domed spaceship rest stop in Woodstock, On 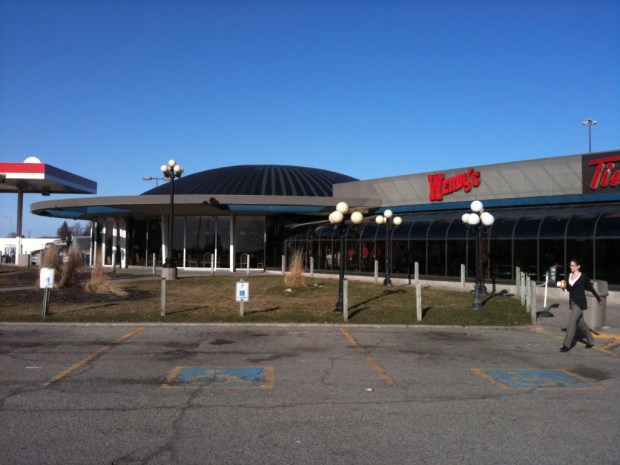 A closer view of the 2009 version of Kohl’s rest stop. (photo: Google Streetview)

Built of wood and stone in typical mid-century modern fashion, Kohl designed his 401 rest stops in a unique shape with a domed red roof that included a tall spire to catch the attention of passing motorists. Teaming up with the Texaco Oil Company, Kohl’s rest stops were completed in 1962 and usually contained a restaurant that was either an independent diner with typical 1960s decor, or a Scott’s Chicken Villa Kentucky Fried Chicken, as the case was at the Kingston, Port Hope and Woodstock locations. 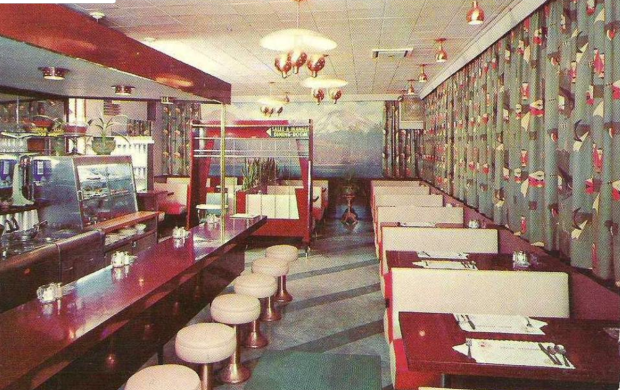 The decor in 1962 inside the rest stop restaurant was very similar to this. 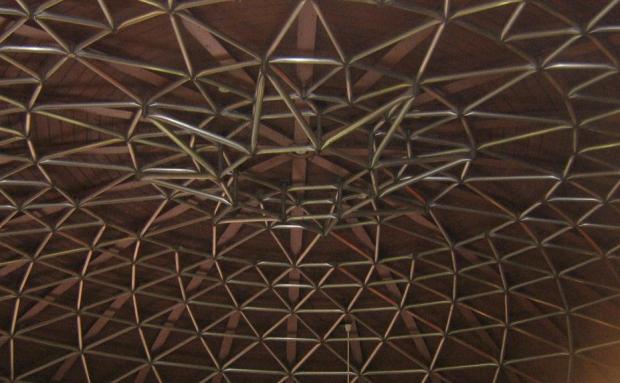 I remember vividly pulling up to Kohl’s domed masterpieces as a kid in the back of the car and being in awe of the futuristic space age design and its fascinating exposed geodesic dome above the restaurant as I ate my Jello and greasy burger. As a I grew up and moved to Ottawa, I still stopped into these domed stations on my way home or on road trips, but they evolved over time and were drastically altered to try and keep up with current, more modern design trends. The original spires were removed, the dome was painted brown, the covered breezeway from the gas station removed, and the independent restaurants were replaced with typical fast food chains.

Drastically altered and with fast food chain restaurants, this 2009 photo of the Kohl rest stop looks nothing like its original 1962 incarnation. (photo: Google Streetview)

Location of now demolished Kohl 401 rest stop in Odessa, On.

Eventually, the Kohl stations slowly began to be demolished in the early 2000’s to make way for new “On Route” stations, until all of them eventually disappeared. Google Streetviews still show the Kohl rest stops from their 2009 streetview photo collection, which is possibly the only remaining record of these Ontario icons. None remain, all traces of them wiped off the 401. They will remain for me a valuable part of my childhood memories and continue to be a rest stop in my mind when I daydream of days gone by.