As a kid growing up on the shores of Eastern Lake Ontario, I had always heard tales of old ships and gunboat battles that occurred in the waters in front of our house near Millhaven, On. With Kingston being a strategic military location throughout Great Lakes history, I always imagined the vessels that may have plied the waters offshore from my home. Tales of mighty gun battles between opposing sides from the 18th and 19th centuries always filled my imagination with shipwrecks, cannon fire and buried treasure. One such tale, perhaps more of a legend, was that of lost gold from a French gunboat during the Seven Years War that apparently still lies buried in the sands of Prince Edward County, about one hour west of Kingston. The gold was reportedly buried in 1758 and never recovered, fuelling local folklore since then. Now, with time I had over the Christmas holidays, and resources never before available, I finally researched this legend of lost gold and hit the sands on a quest for lost gold…

The Seven Years War pitted British and French against each other on the Great Lakes in a battle to secure Upper Canada and control the area north of the the United States. Gunships from both sides sailed the waters of Lake Ontario, exchanging cannon fire in an attempt to gain lake superiority.

French gunship fleet on Lake Ontario during the same period of 1758.

On such incident had a French gunboat sailing across the southern shores of the Eastern end of the lake near what we call the “Gap”, an open space between two of the larger islands on that end. Laden with military documents and a barrel of gold headed to Fort Frontenac (presently Kingston) the French ship was nearing the gap when a Bristish ship under the command of Captain Bradstreet spotted the French vessel on his way across the lake from Oswego, NY.

Captain Bradstreet. British commander of the ship who spotted the French gunboat near Kingston, On.

The Lake Chase Incident of 1758

Not giving up, Bradstreet chased the French ship into the bay, and with their fate almost certainly sealed, the French captain beached his ship, ordered the crew to evacuate with the documents and gold, then torched his ship to the ground to avoid it being captured by the British. The captain and crew then headed inland towards their destination of Fort Frontenac on foot, and as the story goes, buried the heavy barrel of gold to return with reinforcements from the fort to retrieve it later. They arrived at Fort Frontenac only to find it had been attacked and destroyed by the British. The gold, now on British controlled land, was never recovered and apparently still lies buried where it was placed over 250 years ago.

A British map from 1759 of the same area soon after they captured Fort Frontenac.

Over the years, the story of the lost gold has evolved through many incarnations, some more fanciful than others, but they all tell of how the gold remains buried and is waiting to be discovered. Always ready to solve a “history mystery”, I thought it would be fun to re-visit the story in more detail and use some new resources that we may not have previously been able to use. One such resource was a book I came across from 1892 that outlines the story in exacting detail…a story I have never seen written down before, which adds some credibility to the story. Next, we can use old maps and overlay them with current satellite imagery to pinpoint exact areas that are mentioned in the 1892 story. Regardless of what we find, it is a fun and interesting exercise with some fascinating results that I will share with you below… 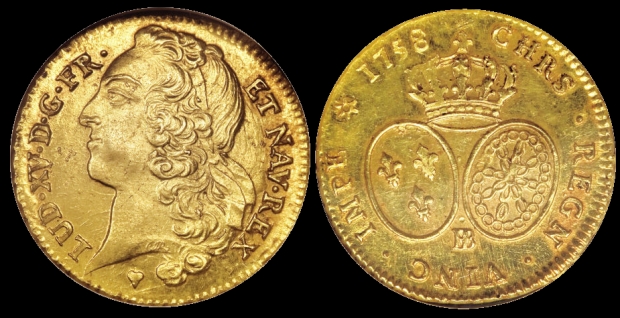 French gold coins from 1758 that may be the ones still buried in the sands of Prince Edward County.

Using the text from the book “Picturesque Prince Edward County” from 1892 that outlines the story, I studies the details mentioned in the account.

Carefully noting details in the story, I was able to create a list of landmarks mentioned, and using a map of the same time period in the 1870s, mark them on the map.

A map of the area the French ship apparently entered with the gold. Circa 1878.

“Little Sandy Bay” is shown on the map as well as a bridge and cabin, mentioned in the story where the tale tells us the gold was buried “half-way between the bridge and the bay”…

Now using a current Google satellite map we can overlay it on the old map:

This gives us an approximate location which we can zero in on to explore for more clues…mostly being the location of the “Old Bridge” which no longer exists since new roads have been built since 1878. 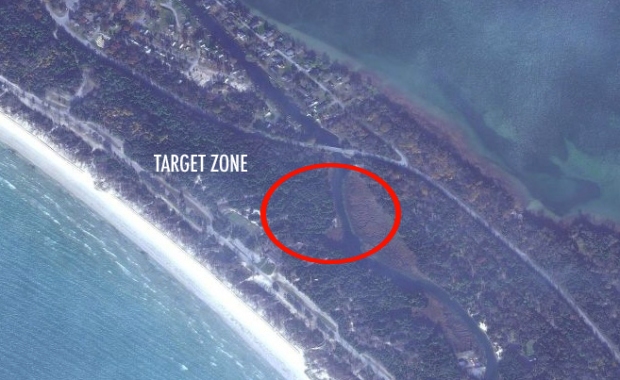 So with some rough ideas of where the bridge and the half-way point could be, I went off with a neighbour in search of some real evidence to help confirm their existence. 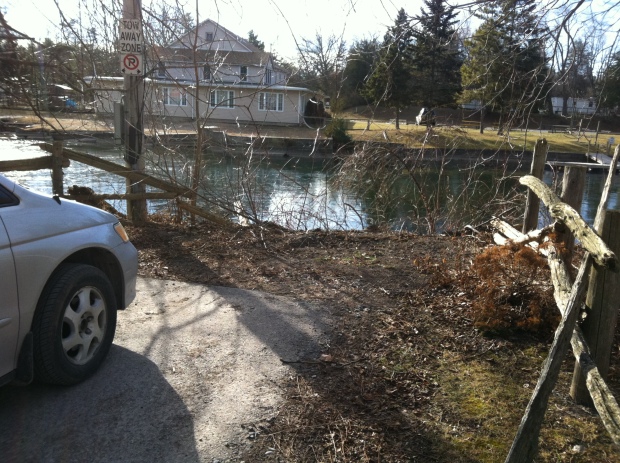 Where the “old bridge” is supposed to be located…sure enough, the foundations remain of this old bridge. 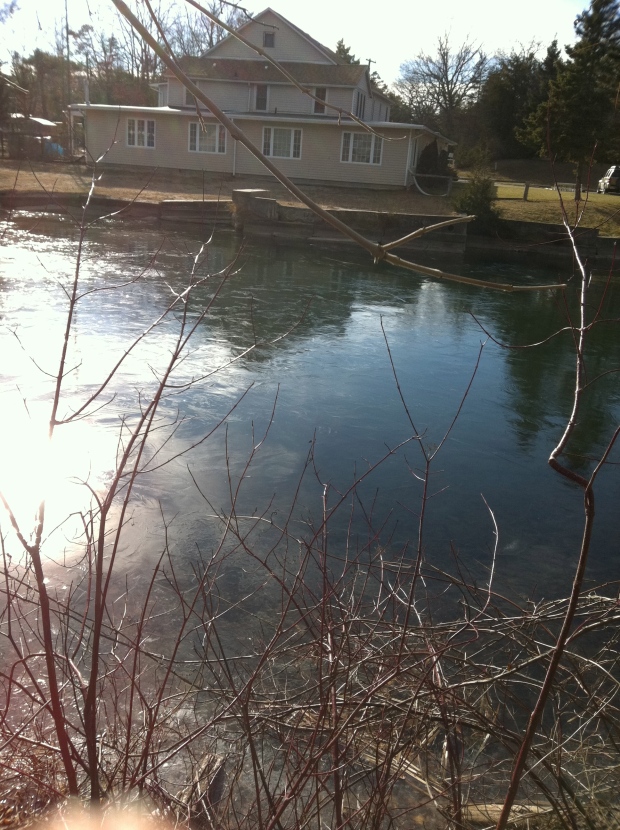 Remnants of the old bridge can be seen where it was indicated on the map.

close-up detail of the old map that shows both the old bridge and the log cabin location.

So now that we have confirmed the location of the old bridge, we can now mark the “halfway” point where the gold was buried near a “cofferdam”, which is a small dam that would have built from stones.

Heading to the halfway point and where the cofferdam should be, there are some collapsed stones….

…but they are now replaced with a modern bridge.

Could this new bridge have been built upon the old cofferdam location which was the half-way point where the gold is supposedly buried? I decided to explore the rest of the area and see if anything else unusal could be found that may give us some further clues. If not, then at least it would be fun to re-trace the supposed steps of the French captain back to the bay where he burned his ship in 1758. 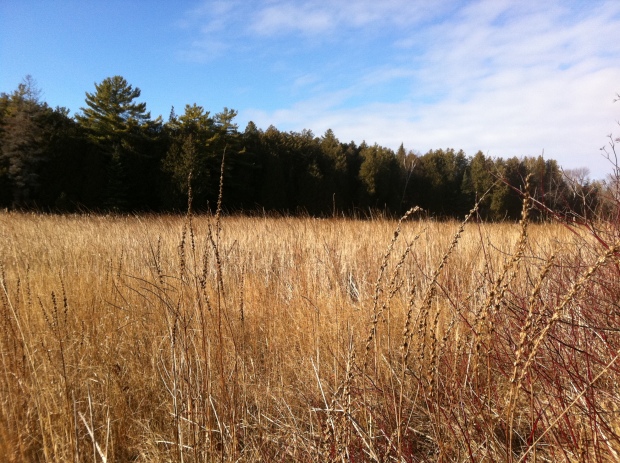 I explored the riverbanks and re-traced the path of the French captain back to the bay where he burned his ship in 1758.

The area is very sandy, and is now part of Sandbanks Provincial Park.

A large man-made mound was discovered on the shoreline walking towards the bay.

Further along the river, I came across what looked to be a man-made mound in the forest on the banks of the river. Some cut logs were supporting it, but the date of this structure is unknown.

Some cut logs were supporting the mound structure. Date unknown. 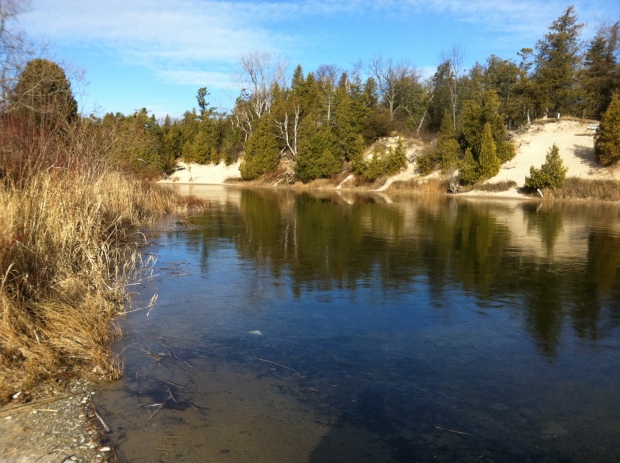 Following the river to where it empties into the bay, this is where the gold-laden French ship apparently was beached and burned.

This is the beach where the ship apparently was burned to avoid being captured.

Looking out towards Lake Ontario and Sandy Bay.

Reaching the end point of the quest, which was actually the start point for the French captain in 1758, no gold was recovered nor were there any further clues to investigate. The empty land is part of Sandbanks Provincial Park, and remains as a beautiful place to walk and fuels the imagination as to what may have happened all those years ago according to the recorded tale below from 1892:

Having successfully re-traced the reported path of the French captain from 1758, the gold could very well still be buried under the shifting sands of the area, and perhaps it will remain as it has for the past 250 years….a LEGEND OF LOST GOLD.