The Spectra-1 made in Ottawa in a photo from the 1971 sales brochure of it on the Ottawa River. Note the Champlain Bridge in the background (from decastris.com)

The year was 1970 and on River Road south of Ottawa a company was building hovercraft vehicles. Dubbed the “Spectra-1”,  this unique vehicle was straight out of a James Bond film of the same era. The product of Modern Hover Vehicles, a company that existed on paper at the address of 1078 Queensdale Ave.in Blossom Park, but that address has apparently never existed. 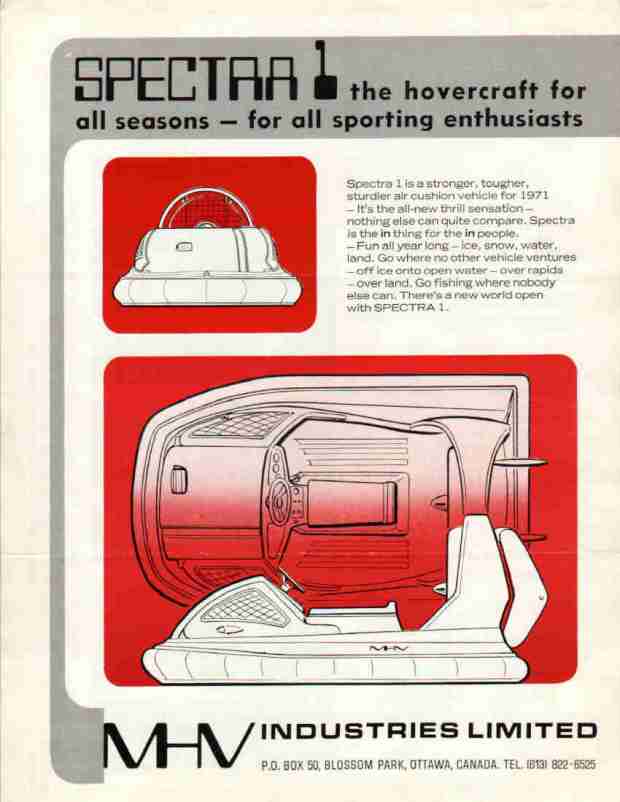 Sales brochure of the Spectra-1 (from decastris.com)

Introduced in 1970 as the “Spectra-1”  with an air cooled 18.5 HP Single Cylinder hover engine and similar propulsion engine, this orange fiberglass bodied hovercraft would travel at speeds of up to to 45 MPH on land and on water up to 40 MPH, yet over ice the Spectra would reach a blazing 60 MPH.

More info on the Spectra-1 made in Ottawa.Note Champlain Bridge in photos. (from decastris.com)

The Modern Hover Vehicle sales brochure touted the Spectra-1 as the “in thing for the in people” and photos show the hovercraft traveling over the rapids of the Ottawa River at the Champlain Bridge area.

A provocative image from the Spectra-1 sales brochure with a frozen Ottawa River in the background (from davidsleds.mysite.com)

This Ottawa company building these craft on River Road then improved on the Spectra-1 by introducing the Spectra-2 which was developed in 1973. The Spectra-2 used bigger 2 stroke engines and incorporated an enclosed plexiglass cockpit windshield for the driver.

The Spectra-2 was, according to their sales brochure, “The most advanced light hovercraft in the world” and was for applications in the geological, armed forces, police and rescue fields of use.

The Spectra-2 with enclosed canopy. (from decastris.com)

The company, Modern Hover Vehicles, had an address of 1078 Queensdale Ave. but that address does not seem to exist according to Google Maps. A fellow on Twitter said he had acquired a Spectra-1 in a trade and is in the process of restoring it, but that is the only one I have ever seen. 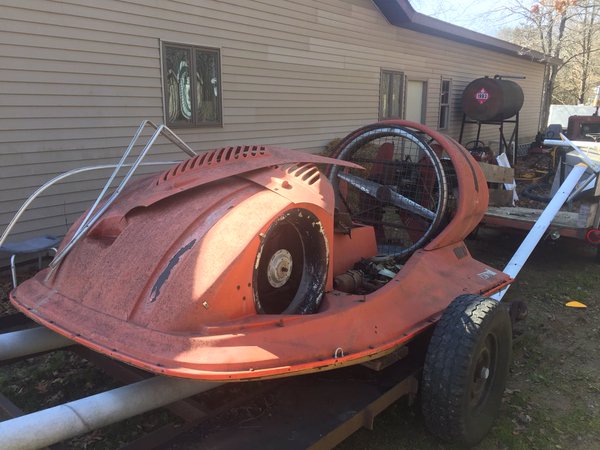 A Spectra-1 in the United States awaiting restoration. (photo submitted by Matt Norman via Twitter)

It is unclear what ever happened to the mysterious Ottawa born Spectra Hovercraft, the company that made them, or if any others are still in existence.