Much has been written, explored and theorized about Oak Island, a modest sized island in Mahone Bay, about an hour;s drive from Halifax, Nova Scotia. The word “mahone” can be traced back to early 18th century settlers in the region, but the world can also be seen as a derivative of the French word “mahonne”, which is a type of ship. In Spanish, “Mahon” is a harbour port, oddly what this bay area is, but this is likely a coincidence.

One of the over 350 islands in Mahone Bay, Oak Island covers 140-acres and is privately owned. The Mik’Maq natives of the area soon saw an influx of  Europeans, which were French fishermen who, by the 1750s, had built a few houses on the future site of what is now Chester. In the late 1750s the British who had taken over Acadia from the French, enacted a series of measures to encourage settlement of the area by the European-descended New Englanders.

In 1762 Oak Island was officially surveyed and divided into 32 four-acre lots, but was known as “Smith’s Island” after a settler of the area. In 1778 it was re-named “Gloucester Isle”. Later it became “Oak Island” and in 1784, the government made additional land grants, this time to former British soldiers, which included parts of Oak Island.

Oak Island Tours now operates on the island, a partnership between Dan Blankenship, brothers Rick and Marty Lagina, Craig Tester and Alan J. Kostrzewa that started in 2007. In 2013 Prometheus Entertainment and The History Channel started producing “The Curse of Oak Island”, which follows these partners in their continued exploration efforts.

The first time there was ever any concept of something being buried on the island comes from Daniel McInnis, who at age 13 in June of 1795, discovered on Oak Island a clearing in the forest, with many old oak stumps surrounding a huge single oak tree with a sawed-off limb and a block and tackle hung from it, about 16 feet off the ground. Underneath the limb was a noticeable bowl-shaped depression about 13 feet in diameter suggesting something was buried below, the ground having settled. Information on this first account can be found in newspaper articles of the years 1861-64.

The next day Daniel McInnis returns to the site with friends John Smith (age 19) and Anthony Vaughan (age 16). This time they find the remains of a road from the oak tree to the western tip of the island. Digging into the depression that was found they find at a two foot depth below the surface there is a layer of flat stones. Now at ten feet down, a platform of rotting oak logs is encountered, with ends embedded in the clay walls which show signs of previous pick axe digging.

Underneath that oak platform is a gap of two feet from soil settling and then another platform at twenty feet. Once the boys get to 25 feet after several weeks digging, they stopped and refiled the hole, looking for help.

Later that same month, one of the boys, John Smith buys Lot 18, the site of the pit, and builds a house.

Schematic of the dug pit on Oak Island.

It would not be until 1804 when a group of interested gentlemen who called themselves “The Onslow Syndicate” begins excavations on the Pit. Work begins again and they find notches in the sides every ten feet down, where oak platforms were originally embedded. At 30 feet, charcoal is encountered, likely used in a ventilation furnace. At 40 feet, a lot of putty is encountered, likely used for sealing an air vent or to plug water leaks. At 50 feet, beach stones are encountered, likely used for backfilling a flood tunnel. At 60 feet, much coconut fibre is found, perhaps used for rope, or caulking with putty. At the 90 foot level, a large stone slab weighing 175-500 pounds measuring 24-36 inches by 12-16 inches is found, with an inscription. Now at 90 feet, water is slowly seeping through the clay. Hitting the 93 foot level, the ground is probed with an iron bar where at 98 feet, they hit a another wood platform. The extent of the wood goes to the the sides of the pit. Work is halted, but when they return a couple of days later, they find the fit has now filled with water, up to a 33ft. depth. 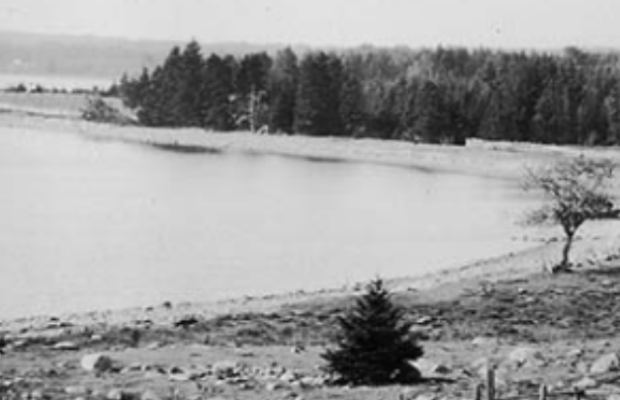 This would be the start of an unbelievable amount of future endevours, loss of life, and millions of dollars spent on trying to solve the mystery of what is actually on Oak Island. These tales are best left to the myriad of books out there, which I encourage you to read.

I only wanted to give a brief background as we will focus on something completely different than the infamous Money Pit.

When at the 90 ft. depth, a stone with odd symbols inscribed on its surface was found face down in the dug out shaft. Not much is known about the stone because it has since disappeared, but it is reported to have been 2-3′ long by 12-16″ wide. 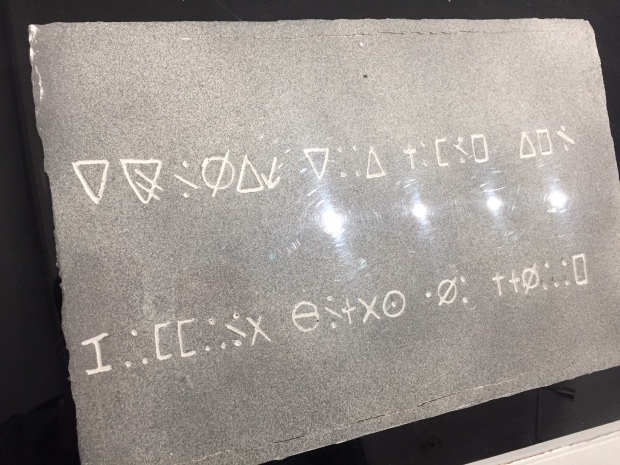 The inscribed stone, a replica of it as the original has gone missing.

The stone was was first reported in a July 2, 1862 Halifax Sun and Advisor article, which mentioned a June 2, 1862 letter that talked about the inscribed stone. A description of its discovery during the 1804 excavation recalls:

“Some [layers] were charcoal, some putty, and one at 80 feet was a stone cut square, two feet long and about a foot thick, with several characters cut on it.”

The odd symbols defied explanation for years and it was not until 1949 when Edward Rowe Snow’s book, “True Tales of Buried Treasure” translated it into something special.

The stone evaded location but in an 1863 newspaper article, the stone was said to have been built into the “chimney of an old house near the pit”. That chimney of the house was the house of Smith, the original discoverer who had purchased the area of the pit and built a house nearby, as mentioned previously. It was described then to have some unusual features:

“There were some rudely cut letters, figures or characters upon it. I cannot recollect which, but they appear as if they had been scraped out by a blunt instrument, rather than cut with a sharp one.”

Later, inquiries in 1864 discovered that the said chimney had been enclosed in wood and surrounded by a staircase

It was later reported that the stone was removed and taken to Halifax. Among those who worked to remove the stone was Jefferson W. MacDonald. According to another source, the stone was taken out of the chimney and moved to Halifax where it was said to have been deciphered, saying:

Fast forward to 1911 when the stone was now being used at Creighton’s bookbindery in Halifax. Apparently a generation later, with the inscription nearly worn away, the stone went to a bookstore in Halifax, and then disappeared altogether from history.

No tracings or rubbings of the original have survived although it was said to have been viewed by hundreds of people. The only symbols that can be seen today are those recorded from a secondhand source, and a replica stone exists in the Oak Island museum.

Because of its lack of of authenticity, I will forgo trying to theorize what the inscription says, although it does look similar to the “Pigpen” ciphers used by the Knights Templar and later the Freemasons (more on them later) and also the the Rosicrucian brotherhood. 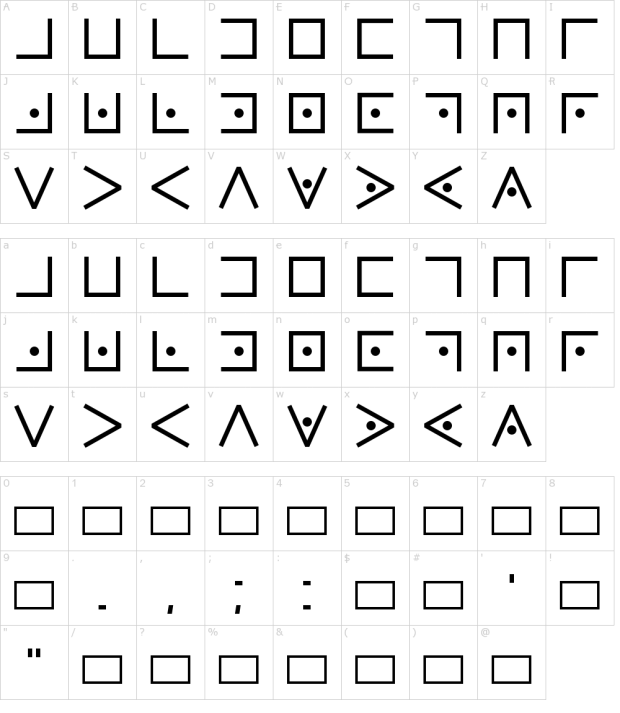 The Templar cipher was used by the Knights Templar during their era of activity to keep messages secret between brothers of the Templar. It uses the Templar cross as its cipher basis. Freemasons began using the cipher in the early 18th century to keep their records of history and rites private, and was used for correspondence between lodge leaders.

Tombstones of Freemasons can also be found which use the system as part of the engravings. One of the earliest stones in Trinity Church Cemetery in New York City, which opened in 1697, contains a cipher of this type which deciphers to “Remember death” and George Washington’s army had documentation about the system, and during the American Civil War, the cipher system was used by Union prisoners in Confederate prisons.

It is remarkable the similarities between the Templar/Freemason cipher and the Oak Island stone which lends itself to the theory that the Templars/Freemasons were involved with Oak Island…but more on that later.