The “Silver Saloon” …Canada’s first “Air Force One” that flew Prime Minister Mackenzie King out of Ottawa and around the world between 1945-48. (At Rockcliffe airport)

During World War Two, Ottawa was home to 168 Squadron based in Rockcliffe, a special air transport group that was responsible for carrying mail back and forth between the troops serving overseas and home. This squadron of aircraft included converted B17 Flying Fortress bombers and later, B24 Liberators. (more info on these planes can be found at an earlier post here)

On June 30, 1944, the Rockcliffe aerodrome received a special aircraft delivered from the United States Air Force with serial number 44-10583. Built at the Consolidated Convair B24 factory in Fort Worth, Texas, this plane was immediately given a special designation: to become Prime Minister Mackenzie King’s personal transport aircraft.

The B24 was quickly modified for the special purpose of transporting the Prime Minister of that time and other dignitaries around the world. Modifications to this WW2 bomber included fitting it with a comfortable VIP interior that accommodated 10 passengers and a special office for the PM and his secretary. Windows were installed along the each side of the fuselage as well as an extra side door. A galley kitchen and washroom were also installed in the Prime Minister’s new aircraft. A special highly polished aluminum exterior finish and lightning bolt paint scheme was given to the PM’s new plane and by August 30, his Silver Saloon was ready for service.

Mackenzie King’s plane sported a newly designed roundel that was to become the future symbol of the RCAF. The RCAF used this roundel on all their aircraft from 1946-48.

One of the first plane’s to sport a newly designed roundel on the fuselage (which later became the official RCAF symbol) B24-574 was ready to transport the Prime Minister of Canada and his staff anywhere around the world. This new “Royal Canadian Air Force One” soon prepared to take Prime Minister Mackenzie King on a very special journey to San Francisco. In June of 1945 the Prime Minister and his staff flew from Ottawa to San Francisco to help organize the newly formed United Nations. Representatives from 50 countries met at the United Nations Conference on International Organization to draw up the United Nations Charter. The Charter was signed on the 26th of June 1945 by representatives of the 50 countries, including Canada’s Prime Minster Mackenzie King who arrived at the signing in his new Silver Saloon. 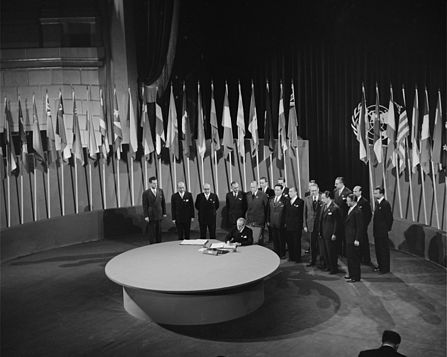 Representatives from around the world gathered in San Francisco in 1945 to form the United Nations. PM Mackenzie King flew there in his new plane to sign the charter.

RCAF-574 later carried the Governor General The Earl of Athlone and his family in March 1946, and then The Viscount Alexander of Tunis to Winnipeg in September 1946.

In 1947 it carried General H. D. G. Crerar on tour of the far east, flying across the Pacific to Hawaii, Johnston Island, Kwajalein, Tokyo, and Nanking. The Prime Minister continued to use the plane as his VIP transport, but when Mackenzie King retired in 1948, his plane was flown from its home in Ottawa to CFB Trenton where it was put into storage.

After only four years of service flying Canada’s Prime Minister and other dignitaries around the world, the Silver Saloon was put into surplus storage in Trenton, On. 1948

Unused, and sitting in a Trenton hanger, the plane was sold as surplus to Chile in 1951. In Chile it was given a new paint scheme and operated under the Chilean designation “CC-CAN” with the “Air Chile” that operated there.

Purchased by the Chilean airline “Air Chile” in 1951, the Silver Saloon was put into airline service after being in storage at Trenton for 3 years. (note new paint scheme)

Flying across Chilean skies for the better part of four years, the former PM’s plane was soon to make it’s last flight.

A local paper in Santiago, Chile reporting the crash of the former Canadian Prime Minister’s plane in 1955 after a landing gear malfunction.

Landing at an airport in Santiago, Chile on February 21, 1955 the plane suffered a landing gear malfunction that resulted in it running off the runway. Local newspapers reported the crash of the former Canadian PM’s plane, and salvage crews were brought in to assess and possibly repair the damaged aircraft. Sadly, the plane was deemed beyond economical repair, and was dragged off to sit idle in storage.

Chilean repair crews assess the damage to the former PM’s plane after the crash, but it was deemed to expensive to repair and dragged away to sit idle for 4 years before being chopped up for scrap metal in 1959.

Four years later the plane met its final fate when it was chopped up for scrap metal in 1959. Mackenzie King’s Silver Saloon was no more, and Canada’s first “Air Force One” disappeared into history.