At an intersection in suburban east Ottawa, Scully and Mulder, the paranormal investigative duo from the hit sci-fi TV series “The X-files” have their names emblazoned on City Of Ottawa street signs. According to a 2008 Ottawa Citizen article the names ‘Scully Way’ and ‘Mulder Road’ were given to these two intersecting streets by Claridge Homes which developed the neighbourhood in 2001, a time when the hit FOX show was at peak popularity. Paul Rothwell the former planner with Claridge Homes said that the old City of Cumberland provided a list of street names not yet taken, one of them being “Scully”. Rothwell reflected in the Citizen article that “At the time, I guess, the TV show X-Files was a big hit and I said, OK, well, there was a name that had been approved, and “Mulder” was the obvious choice for a street to go with it.”

A fun suburban tribute to television’s fictional special agents makes for an interesting landmark, but what’s even more fascinating is that Ottawa has its own real “X-File” incidents, events that stretch beyond that street corner and into the realm of the unexplained. Here are some of my favourites:

In November of 2005 the City of Ottawa experienced an event where hundreds of residents were affected by a mysterious signal that jammed automatic garage door openers across the city. The phenomenon jammed automatic garage doors within a 25 mile radius, including embassy gates and residential garage doors between Aylmer and Casselman. Almost all automatic garage door openers operate with a remote that uses a radio signal on the 390 MHZ band, but on that day were rendered inoperable. Further investigation shows that the 390MHZ signal is also employed by Land Mobile Radio Systems used by the United States government, and a December 2005 US Government Accountability Office report coincidentally states:

“To address homeland defense needs and comply with government direction that agencies use the electromagnetic spectrum more efficiently, the Department of Defense (DOD) is deploying new Land Mobile Radios to military installations across the country. The new Land Mobile Radios operate in the same frequency range–380 Megahertz (MHz) to 399.9 MHz—as many unlicensed low-powered garage door openers.”

This seems to easily explain the phenomena in Ottawa but both the Canadian military and the US Embassy categorically denied any involvement using this new technology of radio signal jamming. It seems the mystery signal that affected Ottawa garage doors for 10 days defied all explanation until it suddenly vanished as quickly as it appeared. Industry Canada inspectors arrived in Ottawa to study the signal jamming but as they began to investigate the problem it disappeared and all systems returned to normal. No organization has claimed responsibility and it continues to defy alternative explanation. 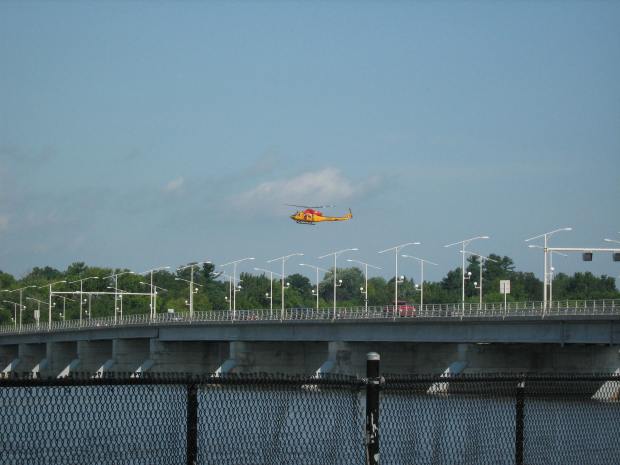 In 2009 an extensive search operation involving military and police equipment scoured the Ottawa River for what was reported to be a crashed UFO. (this photo I snapped is from that search near the Champlain Bridge)

I recall in July of 2009 a number of military helicopters were circling near the Ottawa River at the Champlain Bridge and in typical Spielbergian fashion, I grabbed my bike and hastily pedaled my way down to the river to see what all the commotion was about. Search and rescue helicopters and military vehicles as well as city police equipment had gathered around the river in what looked like a complex recovery operation. Further investigation revealed that the previous night people in Ottawa and in Gatineau reported they saw an object streak across the night sky and crash into the Ottawa River with a “thunderous boom.” The object reportedly had lights on it and appeared to change course several times before it hit the water.

Multiple witnesses called authorities which prompted police, firefighters, paramedics and a helicopter from CFB Trenton to scour the waters for a downed aircraft. Using sonar and underwater cameras the investigation continued into the next day when an object was discovered about 30ft below the surface. An Ottawa Sun article stated that local police constable Alain Boucher said something was down there. “The size and the shape doesn’t lead us to believe it’s any piece of an airplane or fuselage or anything like that. It could be a rock, it could be a bunch of logs stuck together, it’s hard to say.”

Soon police remarked that due to a strong current in the river and because no aircraft were reported missing, there was no debris or oil slick the search was to be terminated. No known further investigation into what happened in the river that July night has been reported and the incident remains a mystery.

The legend of the chupacabra states the beast preys viciously on livestock.

Earlier this year a “mystery creature” viciously attacked a horse in Ottawa near Barrhaven within the NCC Greenbelt. Officials only described the animal as “wildlife incident” and closed off trails in the area to lay traps in an effort to capture whatever attacked the horse. The owner of the horse and neighbours told media that it was “no coyote” and the ottawa sun reported that Dr. Brent Patterson, “a wildlife expert with the Ontario Ministry of Natural Resources and the Environmental and Life Sciences professor at Trent University, also studied the photos of the horse’s wounds and ruled out coyotes, bobcats or cougars as the culprits.”

So what attacked the horse with such severity? A nearby farmer reported a cougar was spotted in his barn, but that animal had been ruled out as the attacker. The traps never caught anything and the area was soon re-opened. Speculation ranged from a bear, rabid dog, a fisher and even the legendary “chupacabra”, an odd beast rumoured to inhabit parts of the Americas. The name comes from the animal’s reported habit of attacking and drinking the blood of livestock. Described as a heavy creature, the size of a small bear with a row of spines reaching from the neck to the base of the tail. Eyewitness sightings have been been reported as far north as Maine but most experts say they are simply coyotes infected with a parasite whose symptoms would explain most of the features of the chupacabra. The attack and the perplexing case of the Barrhaven Beast remains unsolved.

During the 1950s reports of Unidentified Flying Objects grew each day with both the general public and government agencies from around the world quickly reacting. Canada was not without its own concerns over these new “alien spacecraft” roaming the skies, and set up a special investigation unit in Ottawa under the name “PROJECT MAGNET”. An UNIDENTIFIED FLYING OBJECT (UFO) study program was established by the CANADIAN DEPARTMENT OF TRANSPORT (DOT) on December 2, 1950, under the direction of Wilbert B. Smith, senior radio engineer for the DOT’s Broadcast and Measurements Section. Smith, the Defence Research Board and the National Research Council (NRC) were trying to determine that if UFOs did really exist, they might hold the key to a new source of power using the Earth’s magnetic filed as a source of propulsion for their vehicles. The top secret project in Ottawa also worked with their American counterparts in the CIA to determine if this new UFO “power source” could be studied and harnessed.

Smith’s geo-magnetic studies grew, and in 1952 the investigation was moved to Shirley’s Bay, a government facility on the Ottawa River approximately 15km west of Ottawa. UFO detection equipment was installed and by the end of October of 1952 the installation was complete. It became the world’s first UFO research facility. The 12 foot by 12 foot building housed instruments such as a gamma-ray counter, a magnetometer, a radio receiver (to detect the presence of radio noise) and a recording gravimeter within a 50 mile radius from the station.

Smith and his UFO research team at Shirley’s Bay conducted a number of experiments trying to attract UFOs to the area using their newly installed equipment. After months of potential UFO activity being recorded in the area, the facility soon had their most unusual occurrence.

At 3:01pm on August 8, 1954 the instrumentation at the Shirley’s Bay installation registered an unusual disturbance. In Smith’s words “the gravimeter went wild”, as a much greater deflection was registered than could be explained by conventional interference such as a passing aircraft. Smith and his colleagues rushed outside their research building at Shirley’s Bay to view the craft that was creating such a enormous reading on their equipment. Once outside the building they were disappointed to find a heavily overcast sky with limited visibility. Whatever kind of craft that was up there was well hidden under the cover of clouds. The only evidence the researchers had of this large UFO was the deflection registered on the chart recorder paper.

Two days later Smith and the Shirley’s Bay research facility were abruptly shut down upon orders from the Department Of Transport. Many speculate the findings and strange occurrence at Shirley’s Bay prompted the project to go “underground”, with all findings entering the “TOP SECRET” status of operation elsewhere. Smith was allowed to remain if he chose to, but all government funding to conduct his UFO research was halted. Without government subsidies. Smith continued his research, funded by “other sources”. Smith carried on working at Shirley’s Bay, developing what he claimed was a breakthrough anti-gravity device. In a 1959 presentation Smith stated “ We have conducted experiments that show that it is possible to create artificial gravity (not Centrifugal force) and to alter the gravitational field of the Earth. This we have done. It is Fact. The next step is to learn the rules and do the engineering necessary to convert the principle into workable hardware.”

Wilbert Smith, who headed the Ottawa UFO research lab was stricken with cancer and died before he could complete his studies.

As Smith was about to finish work on this anti-gravity device he was stricken with cancer and died at the age of 52 on December 27 1962. The research facility at Shirley’s Bay was closed. The Project Magnet building he worked in existed until 2011 at the Shirley’s Bay Department of National Defence complex now known as “Defence Research and Development Canada” off Carling Avenue. It was simply marked as Building 67 but has since been demolished.

Odd events occur in many communities, usually later explained through logical explanation; a mysterious light becomes a plane, a loud sound turns out to be an icequake and so on. Yet there are some events that defy explanation, and Ottawa is no exception to being host to some of these interesting “X-files”. Perhaps it is because our city is the Nation’s Capital and the frequency of these unexplained events lends itself to being a perplexing anomaly. Or maybe the truth is here.