Before security and safety issues were of concern, Ottawa had a number of publicly accessible underground tunnels that allowed residents to escape the frigid above-ground winter temperatures and move about in conditioned comfort.

The most famous of these underground tunnels is probably the one that links The Chateau Laurier with the old Union Station, once connecting train passengers to the hotel without ever having to step outside. Now closed to the public, this tunnel will most likely never be accessible again after the old tunnel becomes part of the new Senate Building. Accommodating  the Senate chamber while the Centre Block undergoes major rehabilitation work, it is expected that the Senate will remain there for up to 10 years. 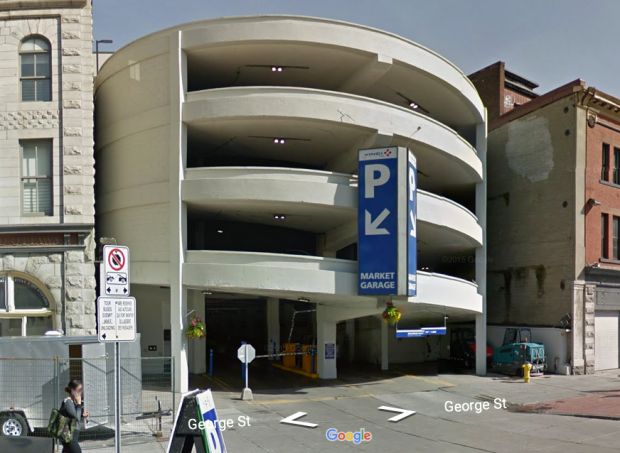 The former Freiman’s Parkade where the subterranean tunnel was accessed. (Google Streetview)

A lesser known tunnel under Ottawa is a sealed mid-century tunnel that once connected Freiman’s Shopping Mall (now Hudson’s Bay) to their own Parkade facility on George St. This tunnel was closed sometime in the early 2000’s but I was fortunate enough to record the tunnel on video back in 1999 when I filmed a chase scene for a short film I was working on. 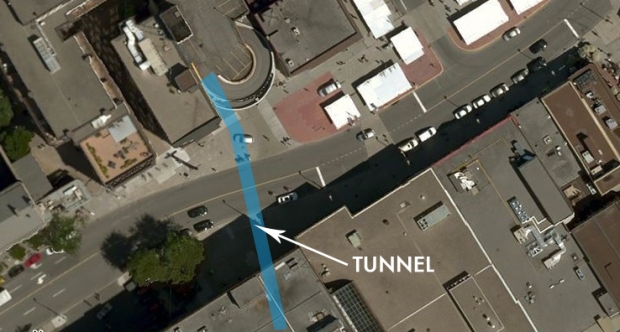 Having recently stumbled across the closed off entrance in The Bay basement while looking to buy a Hudson’s Bay wool blanket to escape the cold, I was reminded to dig out the old VHS tape that documents this tunnel also used to escape the cold. 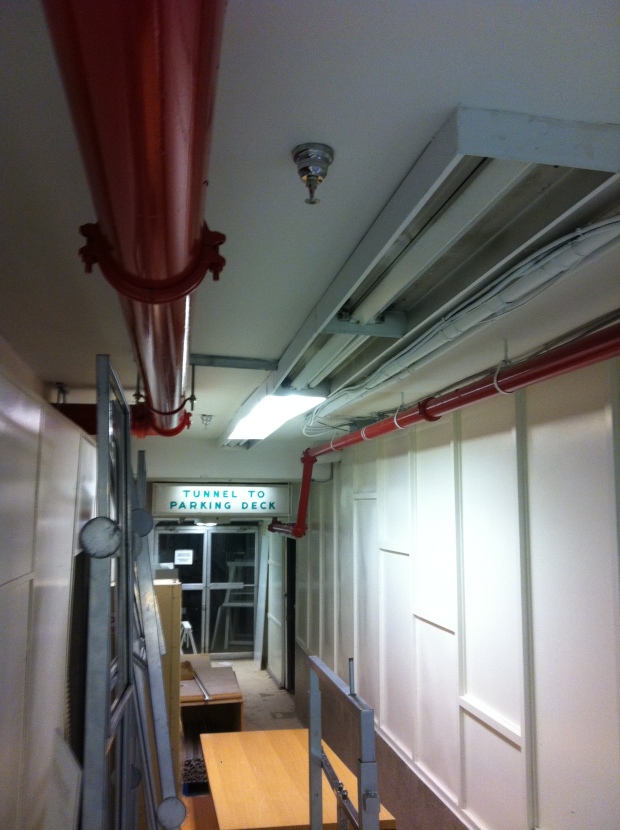 The now sealed entrance to the tunnel from The Bay that is now used for storage. Note the painted over coloured acrylic panels.

The tunnel is actually a phenomenal piece of mid-century architecture, utilizing materials and an aesthetic that provides a unique glimpse back to mid-century shopping conveniences. Resembling a colourful set piece from the TV show “MadMen” I dusted off the poor-quality VHS tape of the tunnel and have posted this piece of subterranean history below. 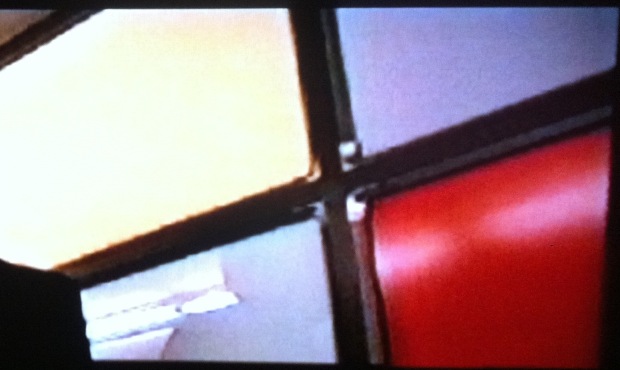 On November 4 1959 Freiman’s Department Store opened their “ultra modern” parkade on George street, a Guggenheim museum inspired spiral parking garage that linked to their store across the street by an air-conditioned and heated tunnel. In a ribbon-cutting ceremony that saw the Mayor and other community leaders attend, guests toured through the 231 foot tunnel that was finished in glazed subway tiles and a kaleidoscope of coloured acrylic panels that also acted as storage compartments for seasonal store decorations in Freiman’s.

A still from the film that shows the coloured panels and storage area behind them.

After Freiman’s department store was acquired by the Hudson’s Bay Company in 1972, the tunnel remained opened and in service until sometime in the early 2000’s, probably just after 9-11 when security concerns likely forced the tunnel to close. 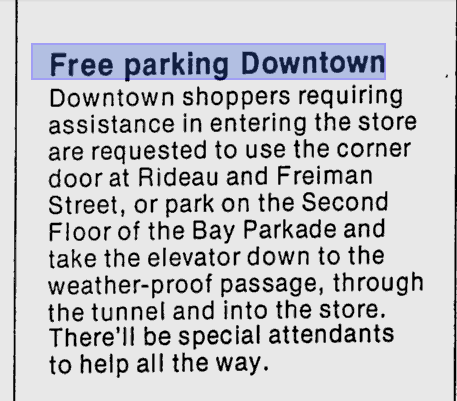 Ads in the newspaper entice shoppers to use the “weather-proof” passage. (GoogleNews)

It has remained sealed since then, and The Bay has closed off the tunnel entrance and used the area for storage but the original 1959 illuminated sign can still be seen. The entrance from the Parkade side has also been sealed and locked.

With this unique time capsule of a tunnel forgotten below the city, lets take a closer look with some stills of the scene filmed there in 1999. If you would like to see the full film clip of the tunnel chase scene you can see it here.

The 231 foot length of the tunnel was finished in glazed tile and multi-coloured acrylic panels.

The ceiling of the tunnel was a typical 1959 tunnel ceiling with odd pipes and eerie clinical fluorescent lighting.