South of Ottawa, just past Smiths Falls, there is a curious old log cabin for sale near a place called Plum Hollow. Recently restored from its decrepit state, this little Victorian era cabin now offered for sale was once home to a respected real-life witch, THE WITCH OF PLUM HOLLOW.

In 1857 Queen Victoria chose Ottawa to be the capital of Canada and the parliament buildings on the west side of the canal were opened in 1865. When the Dominion of Canada was established in 1867,  Sir John A. MacDonald became our first prime minister. These two important parts of history, Ottawa being chosen as the capital, and Sir John A. MacDonald are mysteriously connected to the Witch of Plum Hollow. 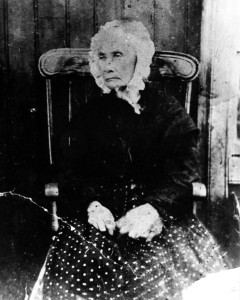 Elizabeth Barnes, better known as the “Witch Of Plum Hollow”

Arranged to marry a British officer, Elizabeth was deeply in love with another man, a  forbidden relationship in her family’s eyes, so she and her lover fled to North America. Once on the continent, the two lovers were married and gave birth to a son, but their love was to be cut short with the untimely death of her husband. She would later re-marry a shoemaker, David Barnes in 1843 and move to the hamlet south of Smiths Falls called Sheldon’s Corners. Here the two would raise a number of children before the husband left her without reason in the 1850’s. Elizabeth Barnes was left with her children to raise and needed money. It was then that her mystic abilities came into play… 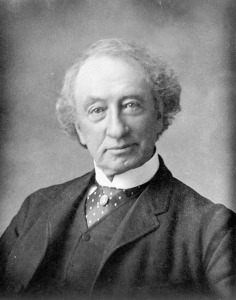 Charging 25cents to tell one’s fortune, Elizabeth was soon nicknamed “Mother Barnes” and had crowds of followers coming to her door seeking their future. Based on her incredible reputation of being accurate in telling one’s days to come, she accumulated enough money to buy a small log cabin of her own near Plum Hollow and entertained hundreds of people from all walks of life from all parts of the continent who sought out Mother Barnes mystic abilities. Farmers, doctors, lawyers, police and anyone else upon entering the tiny cabin would go upstairs to a small room where the witch would be sitting at a table with some tea. 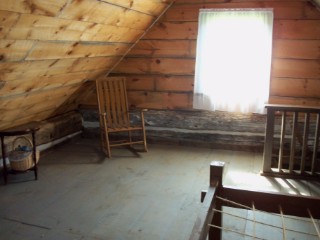 The upstairs room of the cabin where the witch would see the future. (Photo Re/Max Realty website)

Here the guest would have their fortune told in the tea leaves, a common Victorian practice of fortune telling. One of these customers was a young Attorney General by the name of John. He asked the “witch” as she was called, where the new capital of Canada would be located. Gazing through time she told John that the capital would be a town near a river called Bytown. She also told John that he would become the first Prime Minister in the capital city. John was John MacDonald, better known as Sir John A. MacDonald, and years later both prophecies would come true, Bytown would become the capital of Canada and he would indeed become prime minister.

Barnes clairvoyant abilities foretold that the body of Morgan Doxtader would be found and claimed it was the dead man’s cousin who murdered him.  That cousin was later convicted and hanged for the crime. The Witch Of Plum Hollow would also reveal the location of buried treasures, crimes of passion, locate lost personal items, and even reveal future loves. Her powers were always in demand, and she used them with great effect until she died in 1886 at the age of 92. Buried in an unmarked grave, the Witch of Plum Hollow would later receive a proper headstone put there by locals who revered their mystical witch. 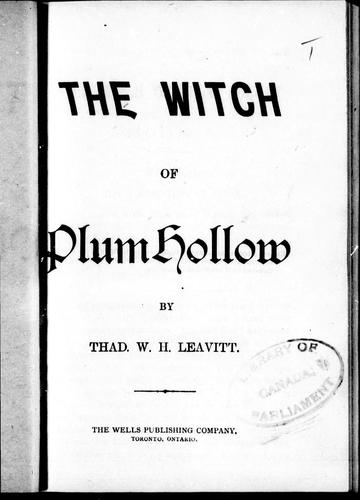 A novel in 1892 was based on Mother Barnes, the witch south of Smiths Falls.

The original log cabin of Witch Barnes still remains on a gravel road called “Mother Barnes Road” south of Smiths Falls. Previously collapsing and in disrepair, the 19th century cabin has since been lovingly restored by new owners. It is now listed with Re/Max Realty for sale at $249,000. The link to the realtor website is here. 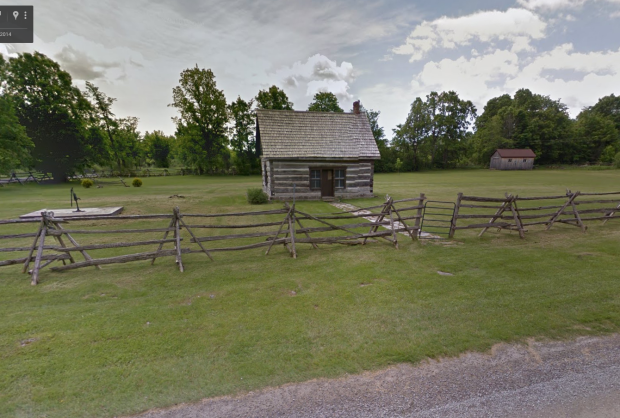 It is unclear if the cabin’s new owners have sensed the presence of the old Witch of Plum Hollow in her old abode, but what is for sure, the fantastic tale of the clairvoyant witch will now live on into the future. 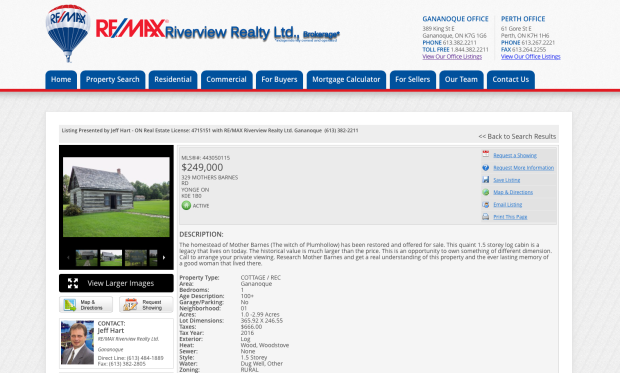 The realtor website listing for the Witch of Plum Hollow’s house now offered for sale.