The Glebe neighbourhood of Ottawa is home to many things, including Lansdowne Park, a place that has been host to many large-scale events throughout history. Yet the largest event is one that seems to be lost in time, the great Marian Congress of 1947.  It involved the construction of one of the world’s largest outdoor churches on the grounds of Lansdowne park but nothing remains to remind us of this grand mega-structure.

Like something from Metropolis, the massive Lansdowne structure hosted nightly religious ceremonies.

With a capacity to seat 75,000 visitors, this massive compound was constructed in 1947 and rivalled the megalithic architecture of German architect Albert Speer, creating a 500 foot long structure on the banks of the Rideau Canal.

The massive monument built on the edge of the Rideau canal at Lansdowne. (Ottawa Citizen)

Part of the “Marian Congress” the huge structure was the centre of Ottawa’s greatest pilgrimage that brought over a quarter million people to the city, making it the only event in Ottawa’s history to bring that many people from all over the globe. However, this epic spectacle is largely forgotten, except for what is recorded on a 70 year old film clip that showcases this gargantuan event in the Nation’s Capital. 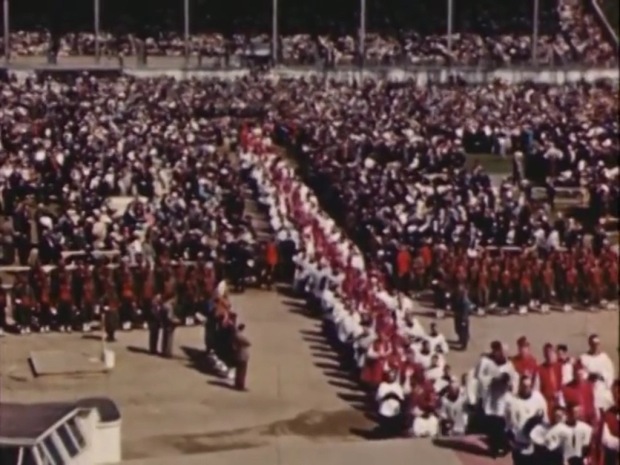 A still from the 1947 film that showcases the huge crowds of the Marian Congress in Ottawa at the Lansdowne super-structure. (YouTube)

With its over 75,000 seats and 500 foot stage, the Marian Congress was not only one of the world’s largest outdoor churches, it also hosted one of North America’s largest fireworks displays and a singing performance by the Dionne Quintuplets. Between June 18 and June 22 tens of thousands of people crowded Ottawa streets in hopes of attending Catholic mass at this Lansdowne super-structure.

Photo from the Ottawa Citizen, June 16th 1947 showing the magnitude of the structure in model form. (Ottawa Citizen)

The sanctuary was constructed by the Ottawa contractors Collet Freres Ltee. and was painted in the colours of the Blessed Virgin Mary which were white and blue. The giant white compound was a meeting place for the crowds of thousands of Catholic pilgrims that had come to Ottawa to pay tribute to their faith and pray for everlasting world peace.

The main stage area of the mega-church at Lansdowne. (YouTube)

The event concluded with a procession of illuminated boats on the canal and a massive fireworks display. The structure was eventually torn down, the seats removed and within a short time the whole thing disappeared without a trace. Nothing remains today to remind us of this mega-structure that once stood in the heart of the city.