Ottawa’s thirst for craft beer seems unquenchable with close to twenty craft breweries now operating in the Nation’s Capital which is pretty good for a town others like to call “The Town That Fun Forgot”. Since Ottawa’s first tavern opened in 1819 (see previous story on that pub here), Ottawa has always been a burg of beer drinkers, so it’s no surprise to see our local breweries doing so well. As these new breweries open and pour their wares at an alarming rate, let’s not lose sight of our important beer history and see if we can find Ottawa’s first brewery, a brewery that I believe was located at the base of this nation’s government, Parliament Hill.

In researching the W5 of this city’s very first brewery, I came across an excellent account of Ottawa’s food and drink lineage titled “Ottawa Food: A Hungry Capital” published in 2014 by Don Chow and Jennifer Lim which examines the history of food and drink in the National Capital Region. They mention it was difficult to pinpoint exactly Bytown’s (Ottawa’s former name) first brewery, but they believe it was “The Victoria Brewery” that operated from 1829 to 1899 at the corner of Rochester and Wellington St, in the now flattened Lebreton Flats neighbourhood. Built by John Rochester, it produced a double stout and an India Pale Ale. By delving into further research I think I have uncovered further information that reveals there may have been an even earlier brewery operating in Bytown. 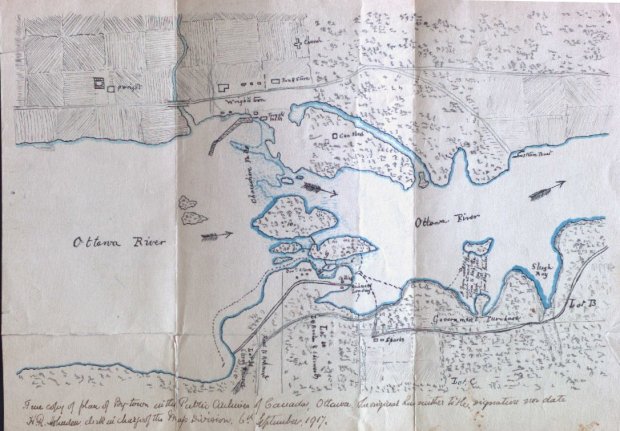 An early sketch of how Bytown looked in 1825.

A great piece at Bytown.net shows that in 1819 a Ralph Smith from King’s County, Ireland built a house near Richmond Landing. An excerpt from the book by Nicholas Davin “An Irishman in Canada” published in 1877 reveals that this Ralph Smith built the first house on the south shore of the Ottawa River, the second being the hut of Nicholas Sparks. After arriving on the shore near Richmond Landing in 1819 and building his house there, Smith got to work operating a brewery and a ferryboat to take people and things across the river to Wrightstown (now Gatineau/Hull).

So that means if Smith built a brewery in 1819, that pre-dates the Victoria Brewery by ten years, making it the very first. Now you may say, that’s all fine and dandy to say he was the first, but as we all know, the proof is in the pudding.

MAPS TO THE PAST 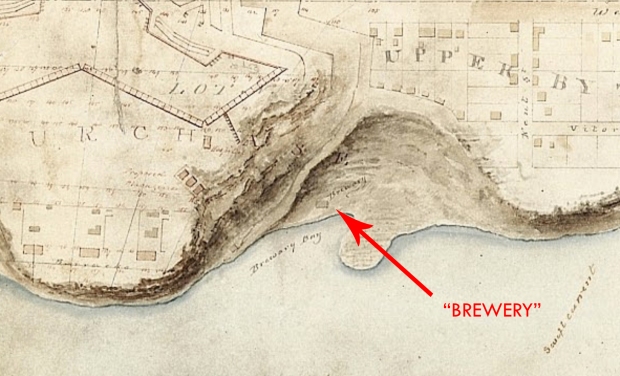 The map from 1831 of Bytown at the Library and Archives Canada shows a brewery just west of what is now Parliament Hill. (MIKAN 4135481)

Old maps of Bytown/Ottawa have always fascinated me, providing a glimpse back in time through their carefully inked information, recording places in a time that was never photographed. I can sit down and pour over old maps for hours, studying the fascinating places that came and went in Ottawa, and one such map is the one at the Library and Archives Canada labelled MIKAN 4135481 Bytown 1831.

Overlaying the 1831 map over the current Google Map.

This map drawn to show the topography of the riverfront of what is now Parliament Hill, back then “Barrack’s Hill” because it was a military outpost, clearly labels a body of water on the south shore, just west of the Hill as “Brewery Bay”. A closer look reveals that there is a small building labelled “Brewery”. Bingo. This is likely the proof of Smith’s south shore brewery that he started twelve years earlier. But hang on you say, not so fast Mr. King, because another source says that a certain Mr.Burke opened the first brewery in that area. Yet that was not operational until 1844, well after the 1831 brewery that is marked on the map. My money is always on maps, and that 1831 map is showing Smith’s brewery, the first one.

WHERE EXACTLY IT IS 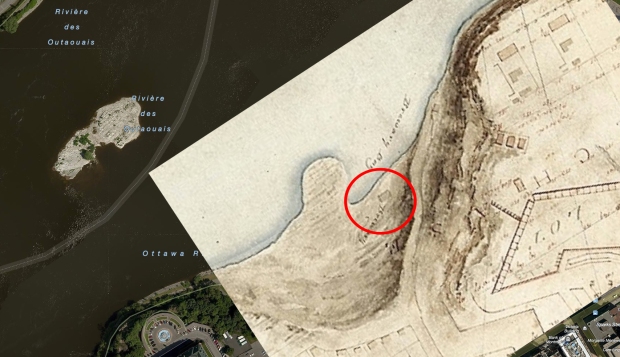 If we use that map from 1831 as proof of Ottawa’s first brewery, we can then extrapolate through time and find its current whereabouts using GoogleMaps and overlays of each.
Doing so reveals that the shoreline behind parliament went through a rise in waters, I’m guessing from the Carillon Dam being built downriver in 1964 and put much of the river shoreline upstream from it underwater.

The first brewery itself seems to have been located just inside Brewery Bay, escaping the flooding waters which submerged the peninsula, which can sometimes be seen at low water time during the year. If this location is correct, then the ruins of Ottawa’s first brewery either lie in the wooded area off the bike path, as shown in the images below, are submerged underwater, or were demolished by some government works building parking lots or whatever else they built down at the river.

The area of “Brewery Bay” looking east…note the submerged peninsula to the left, just a few inches underwater. (Google)

There are some rocky blocks visible through Google Streeview in that area, I’m not sure if those are part of the former brewery or some other post-brewery structure. Once the warmer weather returns and the snow melts it might be a good idea to scope it out for any signs of the brewery, which of course I’ll bet is on NCC property.

If anyone else would like to confirm or deny that this is the first brewery location, then please feel free to chime in. In the meantime, let’s pour a cold beer and enjoy remembering where exactly Ottawa’s first brewery was located.