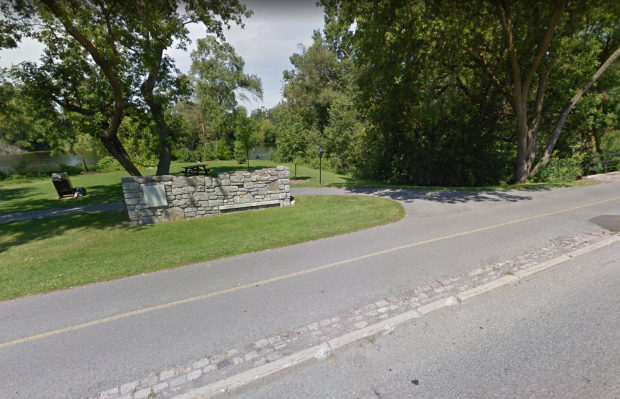 All that remains of Ottawa’s oldest structure. (Google Streetview)

Recently I was passenger in a car driving west along Riverside Drive and noticed something out my window as traffic dragged to a halt at the intersection of Riverside and Bank streets. There, at the side of the road was a wall of old stone. A faded plaque was mounted on it, but the light turned green and we sped away, the mysterious stone wall of unknown origin left behind. What was this puzzling old wall that lies obscurely at the side of a road passed by thousands of motorists each day? A quick Google Streetview visit reveals it is a “Frankensteined” wall hobbled together by the NCC made up of the ruins of a cabin built by one of Ottawa’s oldest settler’s to the region: Braddish Billings. These are the ruins of Ottawa’s oldest remaining structure. 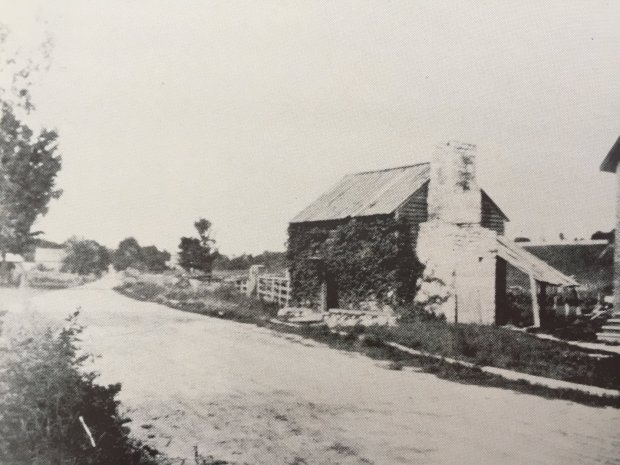 A photo from the late 1800s of Braddish Billings cabin, the chimney of stone being what the wall currently at the side of the road is made from. (Image: “Bytown: the Early Days of Ottawa”)

After the nomadic indigenous people harmoniously lived in the region of the Nation’s Capital for centuries, the first to build a permanent structure here was an American by the name of Philomen Wright, who in 1800 built a cabin over in Gatineau (ruins are on NCC property, unmarked…that story here). Next to arise was a shanty trading post operated by Jehiel Collins near the Chaudiere Falls in 1809. Nothing remains of this cabin, property now owned by the NCC. In 1810 Ira Honeywell built a log cabin in Nepean. Nothing remains of this cabin either, just an NCC plaque hidden off Woodroffe Ave. near the Ottawa River that vaguely tells us of Honeywell’s cabin nearby.  Next to arrive was Braddish Billings who built his place in 1812 at what is now the intersection of Bank St. and Riverside Drive. A cabin was built by Billings along with some farm buildings. These would become the first permanent structures built in Ottawa after the Collins and Honeywell cabins. 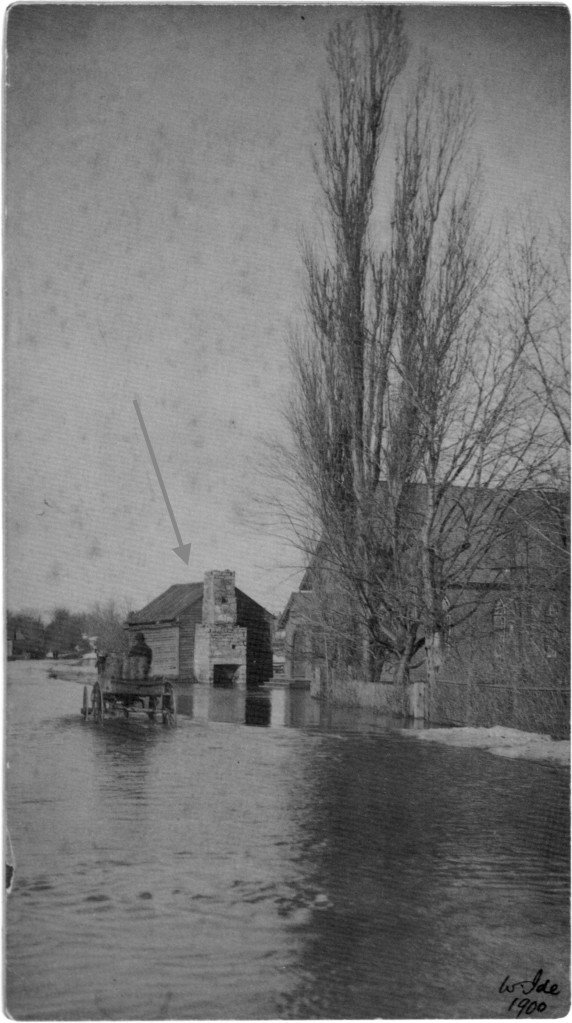 The early Billings cabin with stone chimney that was later made into a wall at the side of Riverside Dr. seen during a 1900 flood on the Rideau River. Methodist church beside it. (Image: Library and Archives Canada)

Billings made his cabin of round logs with no windows with an opening without a door. Billings was likely attracted to the riverfront site because of its close proximity to the Rideau River, its abundant timber, its creek, and its fertile soil. Along with building a sawmill, he began clearing the land and planted potatoes, hay, corn, and turnips. He also continued lumbering for Philemon Wright. His ventures proved successful and in 1829 he built a substantial estate on the hill above his original cabin, what we now know as the Billings Estate Museum, owned and operated by the City Of Ottawa. 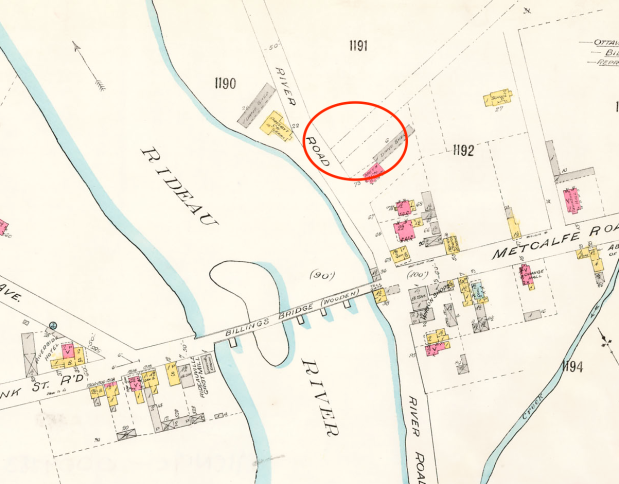 The location of the Methodist Church in 1912 and the Billings cabin that would have been beside it (Image: Ottawa Fire Insurance Plans, Carleton University)

With his new big estate house, the original cabin structures Billings built in 1812 fell into disrepair, neglected and falling to ruin. A Methodist church was constructed next to one of Billings cabins, a wooden structure, that one book says is Billings first house, with a stone chimney that remained on site until 1960 when the NCC demolished it, and the church, for a new Riverside Drive. Taking stones from this old cabin, they built a small wall out of it, which is what we now see at the side of the road. 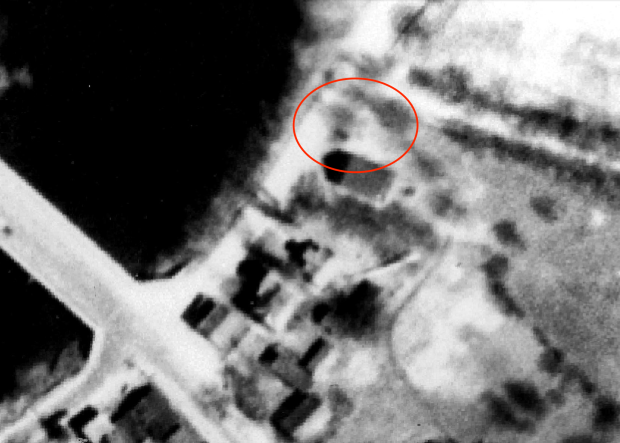 With such few remains of Ottawa’s first permanent structures, I find it odd the NCC would demolish our oldest structure to build a wall out of it. Why not keep the original chimney and build a replica cabin around it, instead of a sad wall? I guess in 1960 the history of Ottawa was not as important as we view it today, but still, it seems unfortunate the original chimney of Billings first structures that lasted so long was demolished and made into an obscure wall at the side of the road. 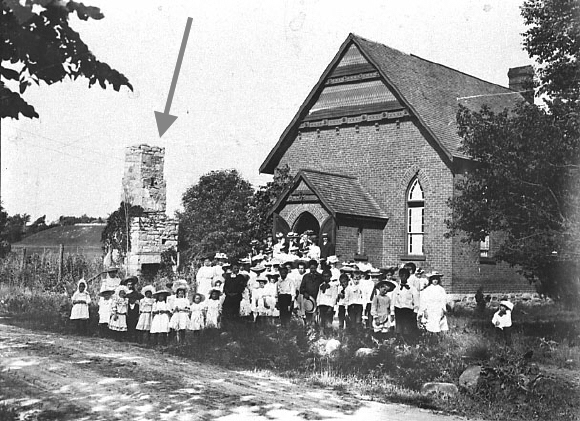 A photo from 1890 of the Methodist church shows the old 1814 ruins of the Billings cabin. (Photo: City of Ottawa) 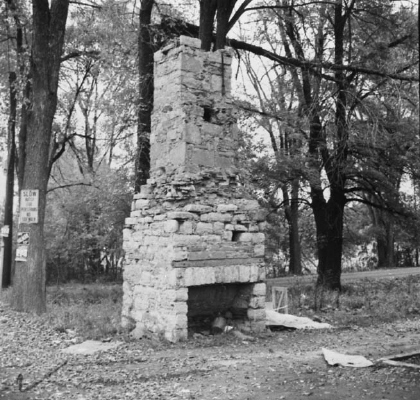 The 1814 stone ruins of the chimney that was demolished in 1960 and made into the current side-of-the-road wall. (Image: City of Ottawa)

Being the Nation’s Capital we have very few reminders of our inception, nothing remains of the Collins’ or Honeywell’s cabins.  Yet, at the side of the road near Riverside and Bank we have some pieced together stones from our past. 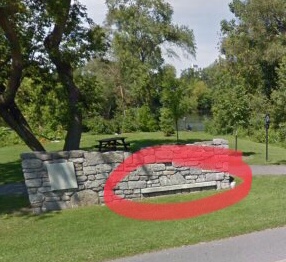 If you looks closely, you can see the stone slab of the original chimney mantle. 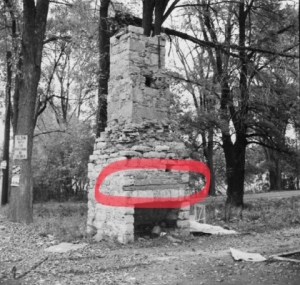 If you pass along Riverside heading west, (you can’t see it if you are heading east) or, if you are travelling on the path along the east bank of the river, take a moment to observe what remains of one of Ottawa’s oldest structures.