Hidden behind Lincoln’s head on Mount Rushmore in South Dakota there is a sealed chamber containing a vault with sixteen historical porcelain enamel panels. In Washington, DC numerous secret tunnels, hidden vaults and concealed chambers exist underneath its streets and monuments. Being the capital of the United States of America, these secret areas undoubtedly need to exist for the protection of important national assets and/or sensitive material. But what about Canada’s capital, Ottawa? Do we have the same hidden chambers underneath our feet, passed over each day without us even knowing it? After an in-depth study of historical maps and other reference material, Ottawa may indeed have its own underground secret vault dating to 1876.

In 2014 a worker that was part of a government contract to address concrete issues at the National War Memorial downtown was quoted in the Ottawa Citizen saying there was a big “cavity” under the memorial that would be filled by 24 concrete trucks worth of cement.

“It’s all hollow down there and the job is to secure the base,” said the worker, who did not want to be identified. 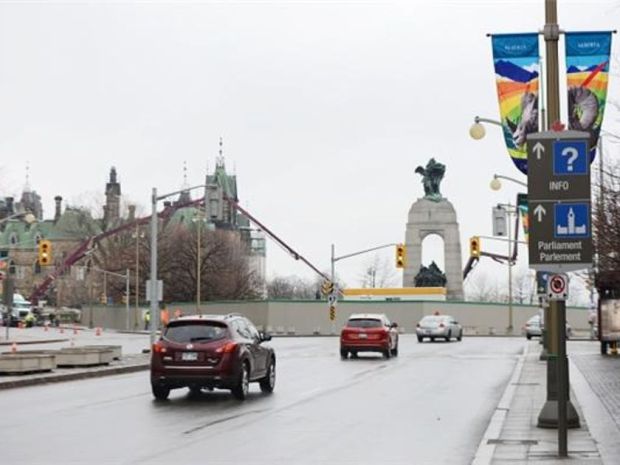 The National War Memorial was designed by Vernon March and dedicated by King George VI in 1939. Originally built to commemorate the Canadians who died in the First World War it was later rededicated to also include those killed in the Second World War and the Korean War, then again in 2014 for the War in Afghanistan, as well as Canadians killed in all conflicts, past and future. It remains one of this country’s sombre reminders of those who gave their lives in service of our country.

The area of the War Memorial is now called Confederation Square, which in fact, is not a square at all, but a triangular shaped area, formerly known up until 1939 as Connaught Place after Governor General Connaught. Within Connaught Place stood Ottawa’s original central post office from 1876 to 1938 when it was demolished to make room for the War Memorial. The old post office was a remarkable building, having to also contain a Custom House and the Office Of Inland Revenue.

This grand old building constructed in 1876 a central clocktower capped with a mansard cupola and many tall, curved windows, designed very robustly by former Dominion Architect Thomas Fuller. (The intriguing Fuller legacy and their design of government buildings in Ottawa is detailed here)

Incorporating both the Customs House and Office Of Inland Revenue, this building would likely have some interesting features for securing assets and valuables arriving by boat on the Rideau Canal, or just to store important records of the time.

The building suffered a massive fire in 1904, and was subsequently re-built with the addition of an extra level, which may confuse people as to why the building changes in how many stories it had when looking at different photographs of the Post Office.

This photo of the old post office circa 1930s shows the extra floor added onto it after it was re-built after the fire of 1904. The vaults would be underneath where all those cars are parked.

During my research of material about the construction there was much said about the sturdy nature of the Post Office building, but nothing about any vaults. This is when I felt it necessary to go to my usual Step 2…OLD MAPS

The current Ottawa Library is a wonderful wealth of information, housing a special room I am most fond of, called the Ottawa Room. Within this room are rare documents about Ottawa and Bytown not available anywhere else. Not digitized, you have to peruse the material by hand. One of my favourite resources is the Fire Insurance Plans from 1888 that give detailed layouts of the buildings at that time, and interesting details about their construction. Looking up the Fire Insurance Plans of 1902, there it was in very clear detail: AN UNDERGROUND VAULT. (NOTE: I have since found these plans online) 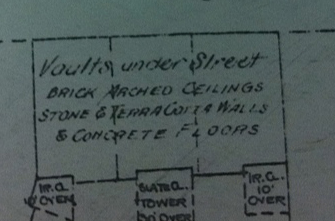 Likely built in 1876 along with the rest of the Post Office/Custom House, the vault outlined on the plans measures approximately 100 feet by 50 ft and is described as having “brick arched ceilings, stone and terra cotta walls, with concrete floors. I am not an expert in architectural design, but I am assuming that the vaults were similar to other Custom Houses of the time, used to store contraband seized by the Customs from the canal boats or for valuables of the Post Office, and government assets requiring secure storage. Fireproof, strongly designed, these vaults of the late 1800s were virtually impenetrable.

This Post Office vault was accessed from inside the building, but also from the outside as shown in the photographs from the 1880s that show steel barred openings in the stone wall beside the canal. This would allow for easy access to the boats on the canal that would be stopping for processing at the Custom House. Later, when the railroad replaced the canal as a means of transporting goods, the canal access was covered by what looks to be a street, and it is unclear whether the vault was sealed at this time.

The vaults have later been covered over by a street, but still exist underneath. (circled area)

Photos after 1900 show the vaults covered over by a street, but it is doubtful that a reinforced, fire-proof vault of that size would be removed due to cost, but rather more simply sealed and forgotten.

Vault area beneath the street in front of the Post Office circled in red.

The Central Post Office/Custom House remained in operation until 1938 when it was decided by the ruling government that Connaught Place was to be the location of Canada’s National War Memorial. The old building that stood firmly for 62 years was then demolished, its remarkably strong construction posing a hinderance to demolition crews assigned to tear down the heavily reinforced structure. 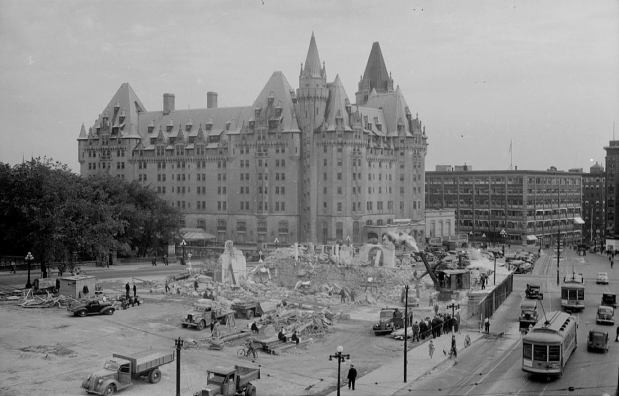 Demolition of the Post Office building in 1938, showing no evidence of the vaults being exposed in this photo.

In the photos I could find of the demolition of the Post Office there is no sign of the vault being unearthed or demolished, which leads me to believe the secure vault remains on site. I would appreciate any further information that could confirm or deny its existence.

Construction of the War Memorial in 1938-39 with no indication of the vault area being disturbed.

After the War Memorial was built in 1938-39, the area was re-named Confederation Square and the streets and bridges are-aligned and renovated over the years. In order to locate exactly where this vault would be today, I used the old blueprint drawings of the post office and overlaid them on current Google satellite images of the same area. 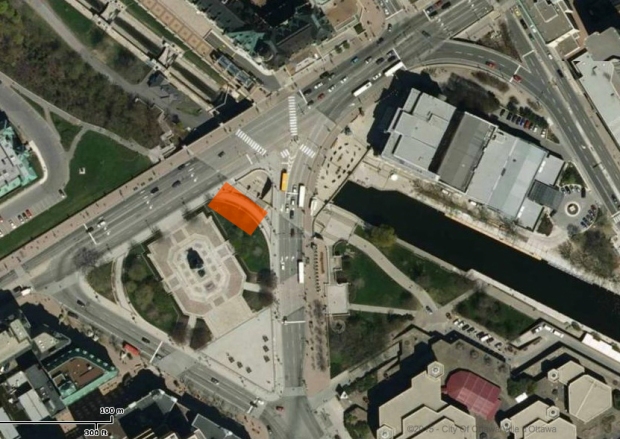 Outlining the vault area in red, then removing the old map, it reveals where the vault may exist today. Sure enough, an undeveloped corner of Confederation Square is just the right size to contain a hidden chamber of that size.

Google Streetview reveals a door (open!) near the vault area.

The next step was to visit the area to see if any clues remain that would either prove or disprove the notion that the original 1876 vaults still exists, sealed and concealed underground.

It didn’t take long to notice that there are indeed nondescript metal doors leading to areas unknown in the vicinity of the concealed chamber.

Google Streetview even shows these odd doors open. I have no idea where they go, but they are intriguing being so close to the original vault site. Is this old vault still being used by the government today? Is it used to store assets or simply used as a mechanical room for the lighting system of the memorial? Without the proper credentials to access what’s behind those metal doors or access to Ground Penetrating Radar to see what lies beneath, we may never know. But for now, I would like to think that there is a massive, sealed vault chamber housing our lost Avro Arrow under our feet.