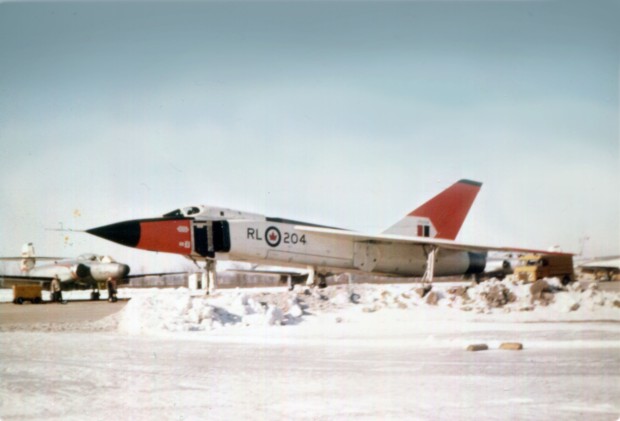 Avro Arrow with Avro Canuck in the background.

During the cold war period after World War 2 the Canadian government contracted Avro Canada to develop a brand new all-weather interceptor that could meet and face the new Russian threat that may potentially invade the skies above our nation. A two seater, dual engined all-weather fighter began to take shape at Avro under the name of the CF-100 Canuck. Design of this new jet had to meet Royal Canadian Air Force (RCAF) specification for an all-weather fighter with advanced avionics and radar for all-weather and night sorties. The project was initiated at Avro Canada in October 1946.

Avro Canada asked another Canadian company to build the advanced jet engines for this new jet. The Orenda’s engine prototype was completed in less than a year, and the engine first ran in February 1949, a year before the CF-100’s maiden flight. Testing of this new top-secret, advanced jet engine took place in classified locations. When it entered production it was the most powerful engine in the world, a title it held until 1952. The Orenda engine also powered the Canadair F-86 Sabre fighter jet.

The Orenda jet engine (on display at Carleton University)

In 1953, Avro Canada once again turned to Orenda to produce an engine for the new ultra secret CF-105 Arrow project. Again, Orenda was able to prototype a new engine in a short period of time, starting development in 1953, completing it in May 1954 and building and running the prototype by December 1954. During the testing period, the new “Iroquois” was the most powerful jet engine in the world. It was aerodynamically matched for peak performance at 50,000 feet  altitude and Mach 2 speed. After some 7,000 hours of development testing, up to a simulated altitude of 70,000 feet (21,300 m) and a forward speed of Mach 2.3, the Iroquois program was cancelled, along with the Avro Arrow on 20 February 1959.

So where did these top secret jet engine tests take place? Local rumours and an area author in Prince Edward County believe secret Avro tests happened somewhere in a field 20 minutes south of Picton, Ontario, 15 minutes from my parents house.

According to the author of the book “Camp Picton: A Storied 70 Years in a Canadian Military Training Camp” by Joanne Courneya-Fralick, one day in 1951-52 the military stopped at a local school to offload jet fuel for a top secret operation near Point Petre. A CF-100 was on a truck and “for some reason it was being towed to Point Petre for testing.” The author visited Point Petre and recorded finding an asphalt ring in a field with a centre tether post of which the Avro test engines were attached for testing.

Avro technicians prepare an Avro Arrow test model attached to a Nike booster rocket to fire out over Lake Ontario at Point Petre in the 1950s.

Rumour has it that experimental Orenda jet engines were tethered to a post in the centre of a large circular paved track in the middle of a secluded field. The experimental jet engine was bolted to a wheeled cart attached to a central post, then ignited. The accelerating jet engine would then spin around the asphalt track, tethered to the centre post, while engineers studied the performance of the engine as it spun around the track at high speed. Making notes and putting the new jet engine through its paces, the engine would scream around in this secluded field, far away from spying eyes. 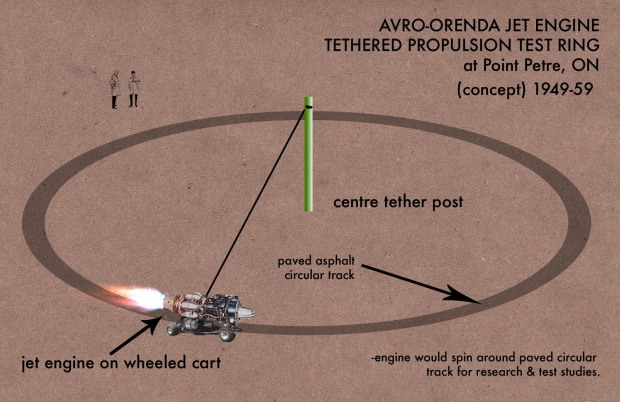 Concept sketch showing how the Avro-Orenda field tests may have been conducted.

The ultra-top secret test operations for the Orenda engines were only a few hundred metres from the Avro Arrow test facility that operated at Point Petre where scale models of the Arrow were fastened to Nike Rockets and fired out over Lake Ontario for aerodynamic study. It seems likely this Orenda jet engine test facility was used for both the CF-100 engine tests around 1950, and the later testing of the CF-105 Avro Arrow Orenda Iroquois engine.

I scoured the area of Point Petre on Google Satellite Maps and came across an unusual anomaly in a field that resembles a paved ring. Being in close proximity to the Avro Arrow test model launch pad, this seems the likely location of the Orenda Ring.

An unusual ring shape in a field near Point Petre…possibly the Orenda Ring.

There was only one way to find out if this is the actual abandoned 1950s Cold War Avro jet engine test facility…to hike in and find out what remained.

Ring shape in a field as seen from the air near Point Petre.

Using Google and Bing Map satellite images, a distinctive ring shape can be seen with a centre area clearly visible. This is most likely the once secret Orenda engine test site. Abandoned for 60 years after the Avro program was cancelled in 1959, the asphalt test track the engine sleds would rotate at high speed around could possibly still be there.

Despite the snow covered grounds of late December, I thought the ring could still be visible and maybe found…and it was.

Details of this fascinating discovery below…

Closer view of what looks to be the Orenda Ring. 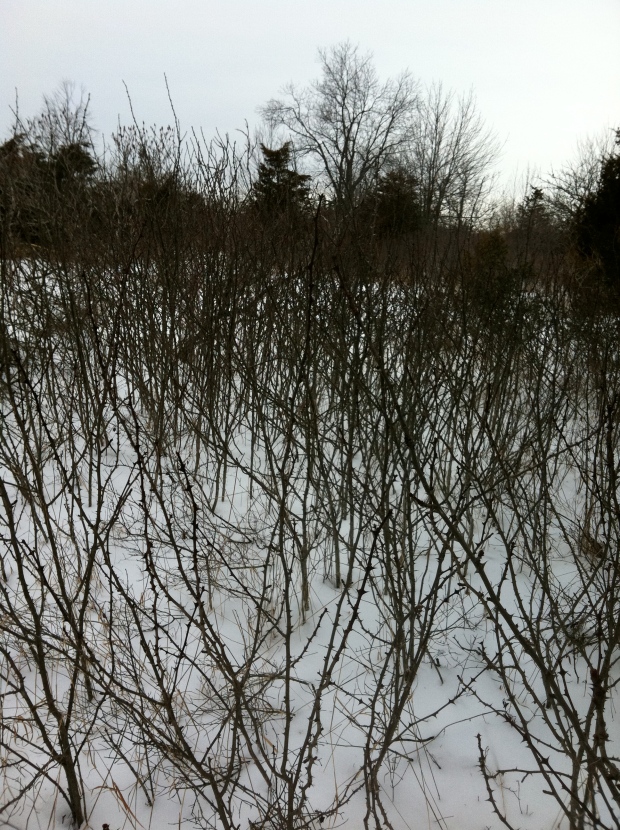 After driving to Point Petre, I mapped out where the Orenda Ring would be and headed into the scrub brush. 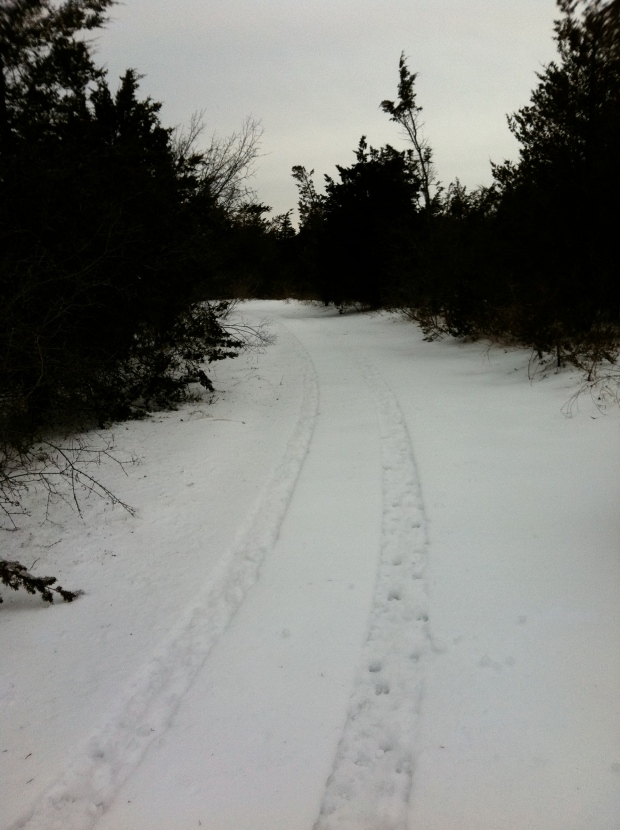 Hiking through the deep snow, I broke through the scrub brush and came across the ring track. ATVs have used it.

The ring track has quite a large diameter, with a gradual curve to it.

Hiking in from the perimeter to the centre of the ring, a post was visible.

..and there it was…after 50 years of sitting abondoned in an overgrown field, the Orenda jet engine tether post sits as a lonely reminder of the Cold War jet engine tests that reportedly happened here. 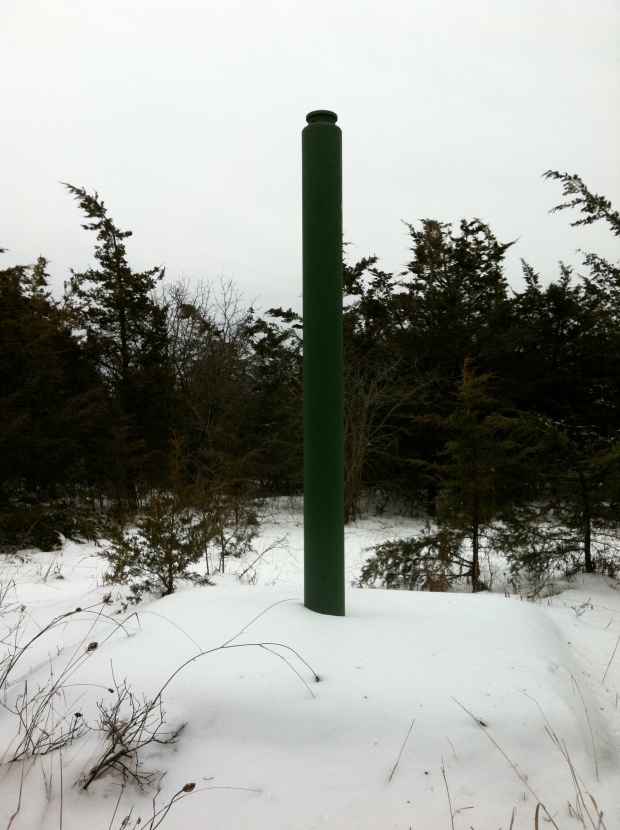 Surrounded by overgrown vegetation that would never have existed during the jet engine tests of the 1950s, the tether post has a visible anchor pad under the snow.