Just south of Ottawa, before you reach the town of Manotick on River Road, there is a popular Rideau Canal lock station called Long Island Locks. Surrounded by quiet, empty fields of gently swaying long grass, there is a crumbling ruin of an old farmhouse that was the victim of a recent fire. This lone old house was not always in such solitude, but was once surrounded by a bustling village called Long Island. 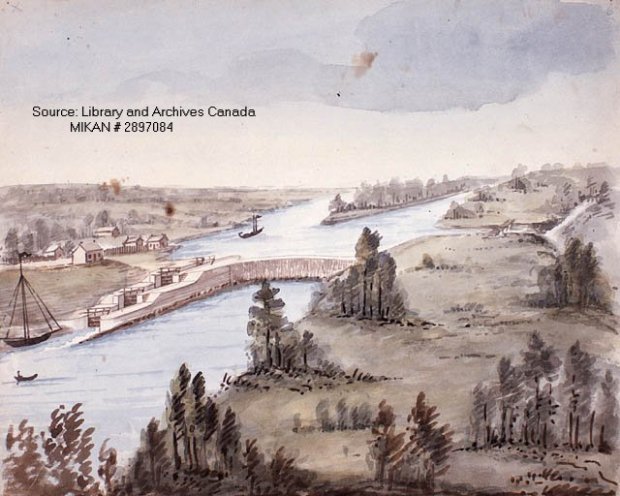 This 19th century painting depicts the area of Long Island and the village can be seen to the left. (IMAGE: Library and Archives Canada)

No trace of this multi-block town can be found today, but streets, a church, hotels and a post office were all part of this community back in the mid 19th century. Where did it go and why did it vanish without a trace? Let’s explore the area of this once-thriving community that seems to have vanished from time and space. 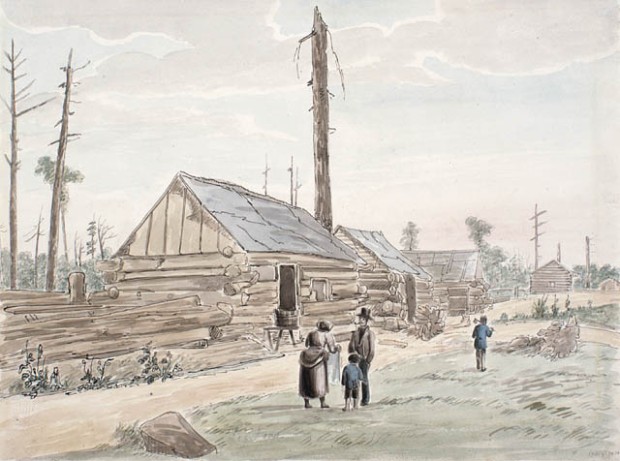 The village of Long Island seemed to comprise of log structures like these depicted in another painting from the 1800s. (Image: Library and Archives Canada)

First settled in the 1830’s during the construction of the Rideau Canal, the village of Long Island seems to be shrouded in obscurity, being difficult to pinpoint as to its exact location. The village at its peak in the mid-1860s contained general stores, two churches and its own post office. However, once a fellow by the name M. K. Dickinson built his stately stone flour mill in Manotick, many of the original settlers moved into Manotick and the village of Long Island went into decline.

Some travellers by canoe approach the village of Long Island in the 1800s. (Image: Library and Archives Canada)

Not much evidence of its existence seems to have survived, just a few sketches and the map of the village as drawn for the County Atlas of 1880. So using that map and overlaying that with current Google Maps, we can pinpoint with accuracy where this ghost village was actually situated. 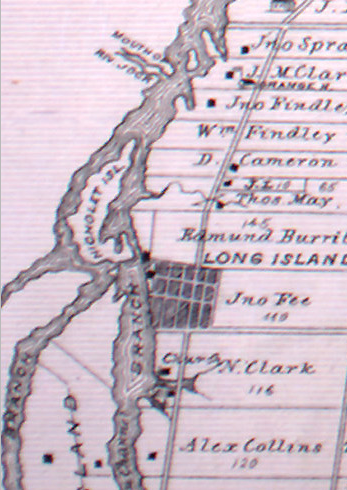 Map from 1880s showing the spread of the village on River Road.

The village must have gone into decline in the early part of the 20th century, as it seems to have disappeared from maps after that time. Was there a sweeping fire that tragically reduced the village to ash? Did the government expropriate the village and bulldoze it out of history? These details are unknown, but I welcome any feedback as to what happened to this village to make it disappear from both the landscape and map records. 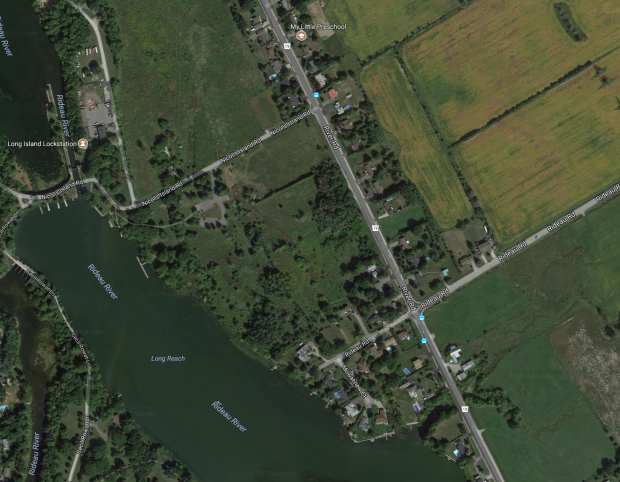 Google Maps with an overlay of the map of the village from 1880s showing the extent of the streets, properties and the churchyard.

Once we overlay the old 1880 map of Long Island village on a current map we can see exactly the location of the ghost town, and many features of the boundaries match up with the current terrain. An investigation of this area would be necessary to search for clues of this lost village and to confirm that this was the right area.

Using map landmarks such as the church and creek, we can use those waypoints to begin our investigation. 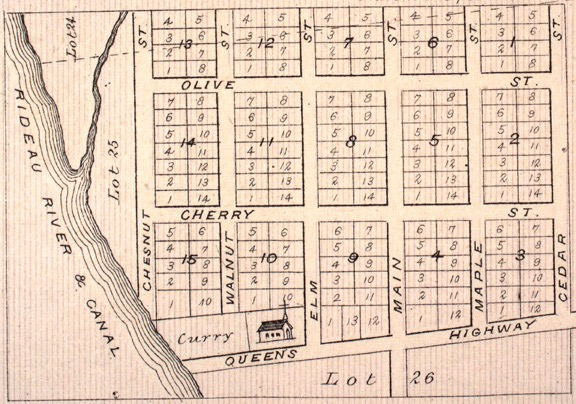 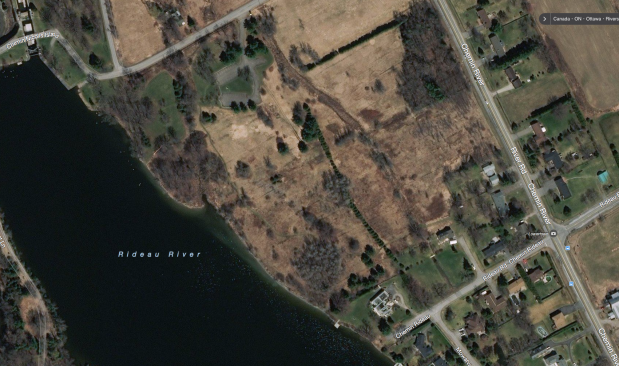 A quick search on Google Maps reveals that there is not much left of the vanished village. The map overlays show the general area where the village would have been located, so in order to investigate it properly, an on-site wander was necessary. You’d blink and miss it it if driving by it on River Road, as years of overgrowth and tress have obscured most of the original site. yet, one key element remains: a deserted graveyard in a field.

Stone obelisks and toppled gravestones mark the location of the village churchyard.

Toppled tombstones and stone obelisks dot the landscape at the site of what was once the church yard as sketched on the original map.

The church seems to have long since been removed, but its interred parishioners still remain, a ghostly reminder of the village long gone. A wander through and examination of the toppled stone markers shows dates in the 1880s, probably when the church was still functioning, but I could not see any dates after that so I am assuming the church yard was not used after the 1890s.

A further wander into the area revealed no trace of the village, only the creek that is mapped out on the original map.

The creek is still there, but no other evidence of this vanished town can be found in the tall grass and scrub of the area. A trek to the shore of the river reveals many bricks strewn around as if the town was bulldozed into the river. I would imagine with the proper permits and a metal detector and/or an archeological dig one could unearth many fragments of evidence that prove the village was once there, but alas, I do not have that access and leave it up to the proper authorities to investigate this ghost village further.

The Long Island Locks as photographed in the 1800s. (Image: Library and Archives Canada) 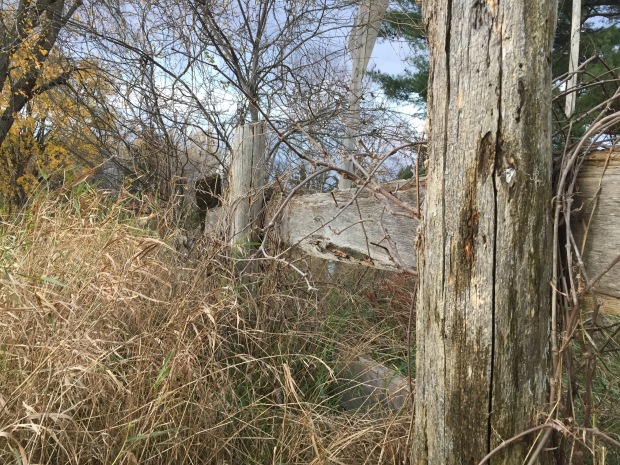 It is fascinating to know that a vibrant, thriving village once existed where nothing exists today, other than the swaying grasses of mother nature. The mystery of what happened to the lost village of Long Island will continue until more is known, but with the old maps, photos, and paintings from the past, we can somewhat piece together what is left on the barren landscape today, and glimpse that of yesterday. With a proper archeological investigation we may uncover more evidence than just the toppled graves of the people that once lived there, but until then, I recommend you check it out and walk through the Vanished Village of Long Island for yourself.

Toppled and discarded bricks line the shores of the Rideau River where the village used to be…was the village demolished and pushed into the river to be forgotten?